Don't get suckered by the polls: Donald Trump will win again — unless we fight for democracy

All the pieces for Trump's re-election are in place. At this turning point in American history, will we fight? 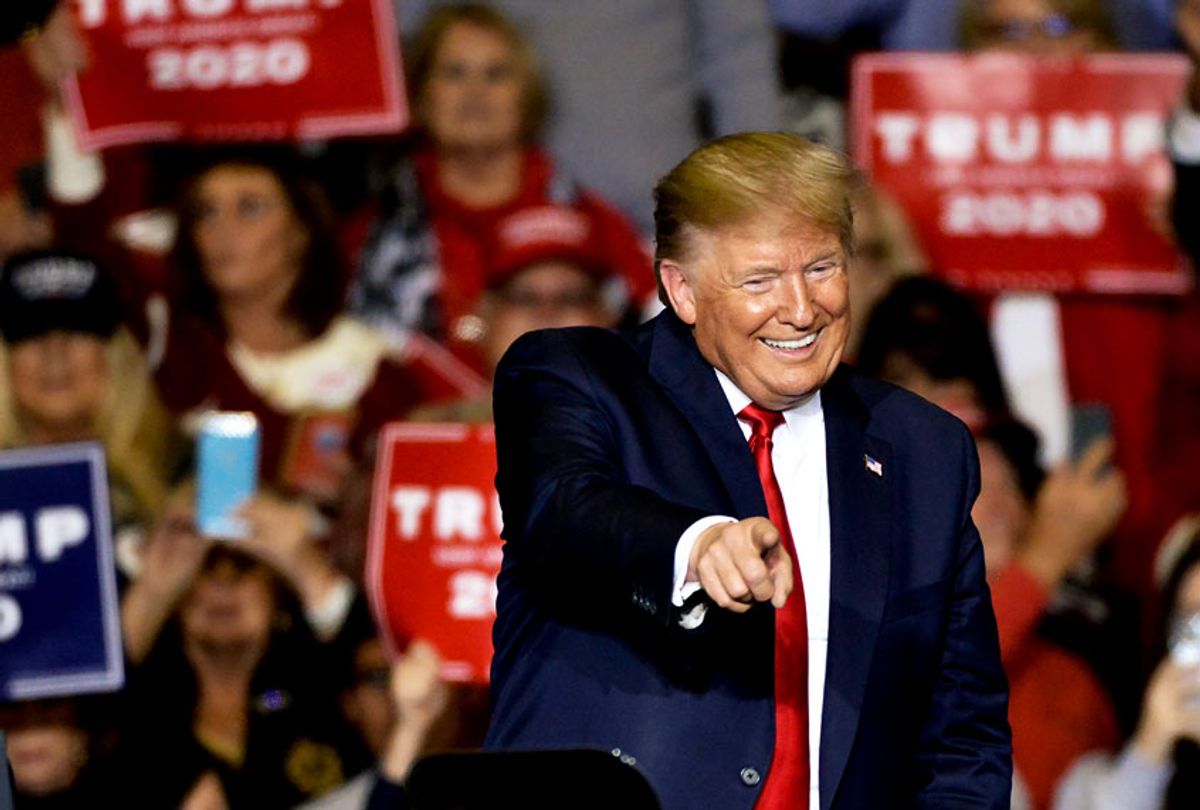 The 2020 presidential campaign is starting to feel a lot like 2016. This is a good thing for Donald Trump and his Republican Party. It is a bad thing for the Democrats.

During the 2016 campaign, Democratic nominee Hillary Clinton seemed almost predestined to defeat Donald Trump. Clinton was a former secretary of state, a former first lady, a person who had devoted much of her life to public service, is highly intelligent and an expert on public policy. She was also buoyed among Democratic voters and many others by the fact that she would be America’s first woman president. Trump, meanwhile, was viewed by the news media and most serious political observers as a buffoon, the gimp at a political freak show. Voting models and public opinion polls showed Hillary Clinton easily winning the White House.

But Clinton’s destiny would be derailed.

Because they found him to be an “entertaining” TV character, the American news media gave Donald Trump approximately $5 billion in free airtime. Trump also benefited from how the media covered the 2016 election, focusing more on negativity and scandal than on substantive policy issues.

FBI Director James Comey would impact the outcome of the 2016  election by announcing a last-minute investigation into Hillary Clinton’s emails (which involved no crimes) while never making the public aware of investigations into Trump’s campaign and inner circle (where crimes actually did occur).

Clinton’s campaign made fatal errors in resource allocation in swing states such as Pennsylvania, Ohio, Wisconsin and Michigan. Disaffected Bernie Sanders voters and third-party candidates such as Jill Stein siphoned votes away from Clinton.

In the end Hillary Clinton would defeat Donald Trump by close to 3 million votes, but would lose the Electoral College and therefore the presidency.

Trump's won because of several key reasons. His skill at developing and manipulating a cult-like following, his authoritarian and fascist appeal to racist, nativist and sexist voters, his deft use of social media including Facebook and Twitter, the Fox News right-wing propaganda machine, and illegal Russian interference on his behalf gifted him the White House.

As the 2020 presidential election approaches, with the third year of Trump’s reign coming to an end, all signs again seem to point toward a Democratic victory.

The Democrats have finally decided to impeach Donald Trump for his many crimes and other misdeeds, including obstruction of justice, abuse of power including bribery and extortion (as seen in the Ukraine scandal), his rampant corruption and violations of the emoluments clause of the Constitution, and his general betrayal of the presidential oath of office.

Trump’s overt embrace of white supremacy and racism, his disregard for the rule of law and the Constitution, and his threats of violence against the American news media, leading Democrats and various private citizens are also impeachable offenses.

On a near-daily basis, Trump’s many political scandals are multiplying like bacteria in a petri dish. He will almost certainly become the first president to run for re-election after having been impeached.

For these and many other reasons, Donald Trump should be doomed. But Donald Trump is not a normal political candidate. He is a political version of James Cameron’s “Terminator” or a zombie ghoul from George Romero’s “Night of the Living Dead.” Donald Trump is almost unstoppable. Despite all of the evidence suggesting otherwise, Trump will likely win in 2020.

While public opinion polls and other research show that the American people are turning against Donald Trump at an increasing rate, his support among Republicans and right-leaning independents remains remarkably high. A new poll from Monmouth University reports that 62 percent of people who approve of Trump say they will continue supporting him no matter what he does.

Donald Trump also has the highest level of baseline support for an American president in the history of modern public opinion polls.

An analysis by the research company Moody’s Analytics shows Donald Trump winning the 2020 presidential election by a comfortable margin. Other polling models echo Moody’s prediction: For many voters the strength of the American economy outweighs Trump’s perfidy and authoritarianism.

As in 2016, the Democrats will be reminded that the United States is not a direct democracy. The president is decided by the Electoral College. There, Donald Trump has plausibly maintained or expanded his lead in key battleground states which he won in 2016. A recent New York Times article explained:

In national polls, Mr. Trump’s political standing has appeared to be in grave jeopardy. His approval ratings have long been in the low 40s, and he trails Mr. Biden by almost nine points in a national polling average. But as the 2016 race showed, the story in the battleground states can be quite different. Mr. Trump won the election by sweeping Michigan, Pennsylvania, Wisconsin, Florida, Arizona and North Carolina — even while losing the national vote by two points.

Democrats would probably need to win three of the six states to win the White House, assuming other states voted as they did in 2016 — an outcome that is not at all assured.

The Times/Siena results and other data suggest that the president’s advantage in the Electoral College relative to the nation as a whole remains intact or has even grown since 2016, raising the possibility that the Republicans could — for the third time in the past six elections — win the presidency while losing the popular vote.

Donald Trump leads a political cult. His members will not abandon him for any reason, because they are enmeshed together in a state of collective narcissism and other mental pathologies. Right-wing Christian evangelicals are among Trump’s most enthusiastic supporters. According to a recent Public Religion Research Institute (PRRI) report, 99 percent of white Christian Evangelicals report that they will never defect from Donald Trump’s cult.

The new PRRI report also shows that Republicans have sealed themselves into a right-wing echo chamber of lies and disinformation. BuzzFeed explains:

Fox News viewers are remarkably, and unrelentingly, loyal to Trump. Fifty-five percent of Republicans who get their news from the network said there was nothing Trump could do to lose their approval, a recent study found. This was in contrast to just 30% of Republicans who don’t get their news from the network. In a new Suffolk poll, only 9% of people who trust Fox News the most said they believed Trump’s call with Ukraine’s president is an impeachable offense, compared to 72% of people who trust CNN the most. And 78% of Fox watchers said they agreed with Trump’s assessment that the impeachment proceedings constitute a “political lynching.”

Interviews with Trump’s supporters reveal a public so unflinchingly loyal that any efforts to impeach Trump for high crimes and misdemeanors makes his cultists love him even more.

Democrats face two key questions: who are Trump’s most stalwart defenders, and can they be persuaded to abandon him?

New research suggests an answer to the first of these queries. It’s a group that Democrats should — and could — be winning over: blue-collar white women. While Democrats made crucial gains among these voters in the 2018 election, these women may now be rallying to Trump’s defense… .

As of October 21, Trendency found that a solid majority (54 percent) of non-college-educated white women either outright oppose or lean against impeachment, while just 37 percent strongly support it. In fact, blue-collar white women are the strongest opponents of impeachment among all white voters (see chart below). This opposition is in stark contrast to college-educated white women, among whom only 26 percent indicated “no support” for impeachment as of October 21.

Why does this group of white women support Donald Trump? White women, like white men, have both historically been deeply invested in white supremacy. Non-college-educated white women’s support for Trump is also a function of internalized hostile sexism where his misogyny, dozens of alleged sexual assaults, and efforts to take away women’s reproductive rights and freedoms are not viewed as disqualifying and may in fact be understood as reasons to vote for him.

What if Donald Trump is in fact defeated in 2020? He, his supporters and their captive news media will claim that he is a victim of a coup. This will make governance all but impossible for the new Democratic president. With Trump and his allies already engaging in stochastic terrorism and talk of “civil war,” right-wing political violence on an escalating scale will then be more likely than not.

As Tom Nichols observed in a recent column in USA Today, the modern Republican Party has decided to destroy itself as proof of its loyalty to Donald Trump and American fascism. Like its leader, the present-day Republican Party represents an existential threat to American democracy.

Nichols writes, “The House Republicans have clearly decided to throw themselves on the pyre of Donald Trump’s burning presidency. The last act of this tragedy — and impeachment, no matter how it turns out, is a national tragedy — will be when Senate Republicans meekly submit to the will of Donald Trump and acquit him, like terrified jurors under the glaring eye of a Mafia boss who knows their names.”

Nichols then sounds this alarm:

There isn’t much more ground to cover between the historic Halloween vote and the final immolation of the Republican Party. The GOP will fail this test of character. What is more important is whether the American nation passes it and demands the impeachment and removal of the greatest threat to the United States Constitution ever to come from the Oval Office.

Former high-ranking and other distinguished members of the United States military and the intelligence community have also warned the American people and the world that Donald Trump is a threat to democracy. Speaking to that point, retired Adm. William H. McRaven, former commander of the U.S. Special Operations Command, even wrote an op-ed in the New York Times to suggest that Donald Trump is “destroying” the United States.

As should be obvious to everyone, the 2020 presidential election is not politics as usual.

The re-election of Donald Trump will mean that basic human and civil rights, the rule of law, the Constitution and other central aspects of American democracy — such as freedom of the press, free and fair elections and the right to vote — will be imperiled.

Trump and his allies will take a 2020 victory as an endorsement of the "unitary executive" theory, which holds that the president — as long as he or she is a Republican — is more like a king or an emperor than a democratic leader accountable to the Constitution and the rule of law. Such an outcome is a betrayal of the best core democratic values of the United States established at the founding and enshrined in the Constitution, values for which millions of Americans, both at home and abroad, have struggled, fought and died.

Ultimately, the 2020 presidential election will be one of the most important moments in American history. Like the Civil War and the civil rights movement, it is a referendum on the country’s democracy and its centuries-long journey to become a “more perfect union.” In its national myth America is a shining city on the hill. A vote for Donald Trump in 2020 is a decision to transform that shining city on the hill into a stinking outhouse and an embarrassment before the world. This is the choice that the American people will make in 2020.

Defeating Donald Trump requires full knowledge of the facts. They must not be ignored in favor of overly optimistic predictions meant to buoy the spirits of the “resistance.” Vanquishing President Trump and his movement is urgent and necessary. It will not be easy, and victory is by no means certain.