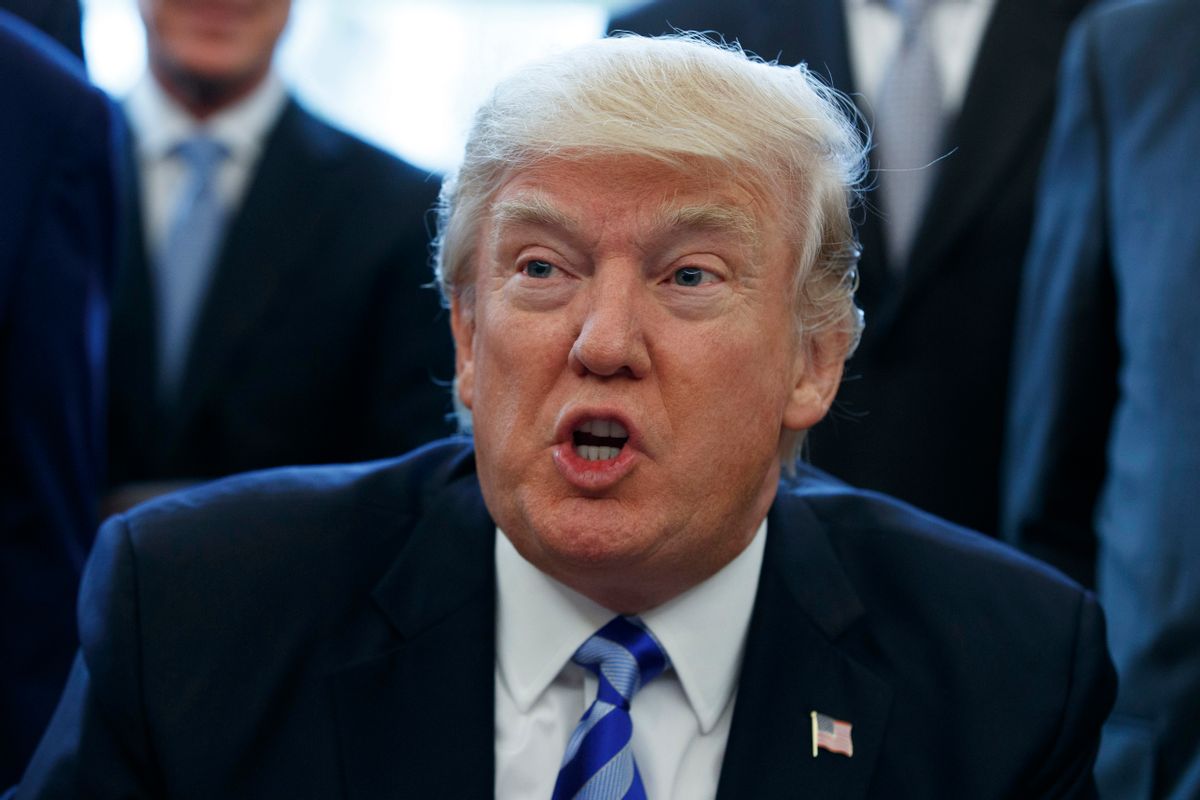 FILE - In a Friday, March 24, 2017 file photo, President Donald Trump announces the approval of a permit to build the Keystone XL pipeline in the Oval Office of the White House in Washington. (AP Photo/Evan Vucci, File) (AP)
--

The attorney Trump nominated for a seat on a federal commission that oversees pipeline construction and other energy projects wants to impose the legal equivalent of the three monkeys that see no evil in assessing how oil and gas companies are destroying our planet.

James Danly, a relatively inexperienced attorney who was an associate at the mega-lobbying and law firm Skadden, Arps, Slate, Meagher & Flom before the White House named him the general counsel for the commission, prefers the benign-sounding phrase “humble regulator.”

“To suggest that FERC may do nothing not explicitly stated is to misunderstand Congress’ intent,” said Scott Hempling, a law professor at Georgetown.

Danly used this hands-off approach in a case involving the Tennessee Gas Pipeline Co. when he and other commission attorneys said that limitations in the Natural Gas Act meant the Federal Energy Regulatory Commission didn’t have to look at possible greenhouse gas emissions.

Chief Judge Merrick Garland and two other justices on the U.S. Court of Appeals for the D.C. Circuit chided FERC for that reasoning, writing that the National Environmental Policy Act requires FERC “to at least attempt to obtain the information necessary to fulfill its statutory responsibilities.” The appellate court did uphold FERC’s decision authorizing the pipeline.

Danly has been influenced by the Federalist Society, the same people who helped bring us Brett Kavanaugh and are stacking the appellate courts with closed-minded, right-wing justices. The Senate Committee on Energy & Natural Resources is scheduled to consider his nomination on Tuesday.

A report from the Institute for Policy Integrity at the NYU School of Law says FERC has a legal obligation under the Natural Gas Act to consider increases in greenhouse gases from pipeline projects and could estimate the harm.

The commission is reviewing how it does pipeline approvals, and Danly would be another vote to help oil and gas companies build more pipelines as our planet overheats.

The Delaware Riverkeeper Network said the pipeline review process needs to be reformed to minimize the potential for accidents. The Keystone pipeline, which Trump wants to extend, recently spilled more than 380,000 gallons of oil in North Dakota.

Environmentalists have stalled the three biggest U.S. pipelines that are planned or under construction, including the Keystone XL pipeline, with legal challenges. The 600-mile Atlantic Coast pipeline from West Virginia to North Carolina may not be completed unless the U.S. Supreme Court overturns a decision blocking it from crossing the Appalachian Trail in Virginia. Another court stopped work on the 303-mile Mountain Valley gas pipeline from West Virginia to Virginia.