Forces of wealth and privilege are outraged that they have to face not one, but two progressive candidates 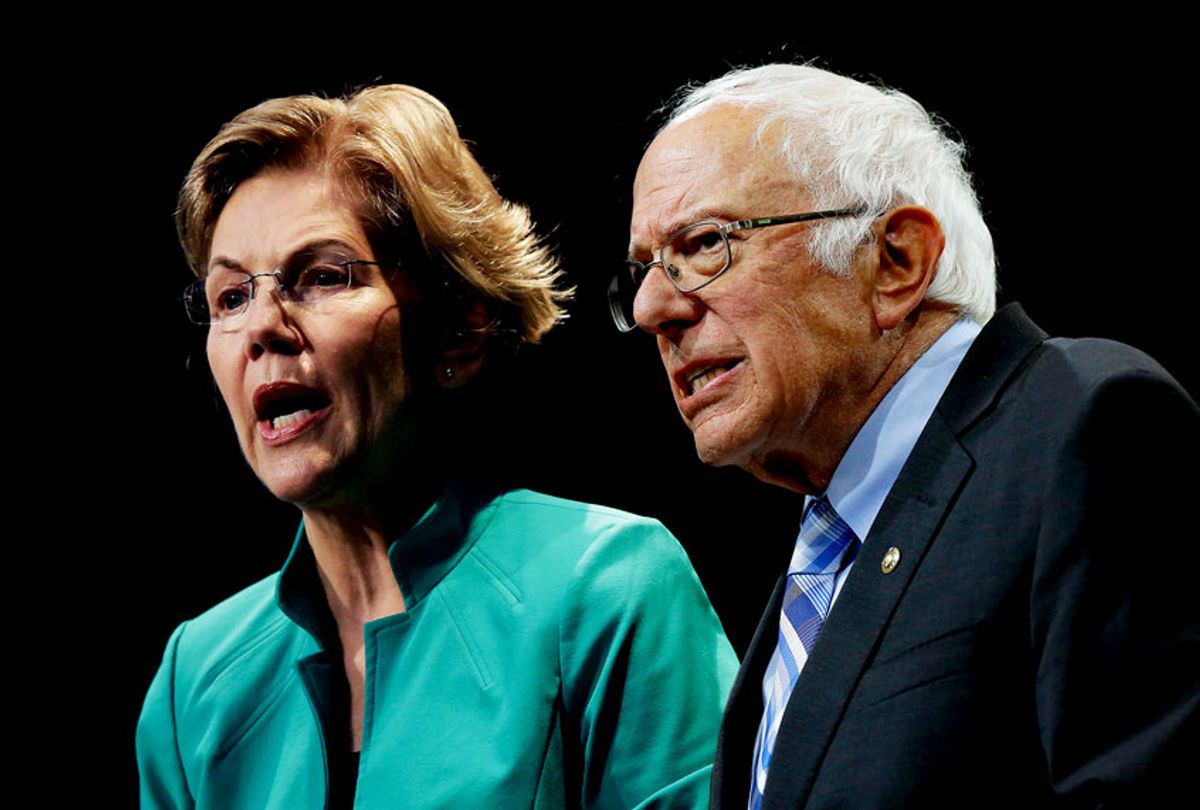 For many decades, any politician daring to fight for economic justice was liable to be denounced for engaging in “class warfare.” It was always a grimly laughable accusation, coming from wealthy elites as well as their functionaries in corporate media and elective office. In the real world, class warfare — or whatever you want to call it — has always been an economic and political reality.

In recent decades, class war in the United States has become increasingly lopsided. The steady decline in union membership, the worsening of income inequality and the hollowing out of the public sector have been some results of ongoing assaults on social decency and countless human lives. Corporate power has run amuck.

Now, the billionaire class is worried. For the first time in memory, there’s a real chance that the next president could threaten the very existence of billionaires — or at least significantly reduce their unconscionable rate of wealth accumulation — in a country and on a planet with so much human misery due to extreme economic disparities.

In early fall, when Bernie Sanders said “I don’t think that billionaires should exist,” many billionaires heard an existential threat. It was hardly a one-off comment; the Bernie 2020 campaign followed up with national distribution of a bumper sticker saying “Billionaires should not exist.”

When Elizabeth Warren stands on a debate stage and argues for a targeted marginal tax on the astronomically rich, such advocacy is anathema to those who believe that the only legitimate class war is the kind waged from the top down. In early autumn, CNBC reported that “Democratic donors on Wall Street and in big business are preparing to sit out the presidential campaign fundraising cycle — or even back President Donald Trump — if Sen. Elizabeth Warren wins the party’s nomination.”

As for Bernie Sanders, four years ago he carried every county in West Virginia against Hillary Clinton in the Democratic presidential primary. But last week Sen. Joe Manchin of West Virginia, nominally a Democrat, flatly declared that if Sanders wins the nomination, he would not vote for his party’s nominee against Trump in November 2020.

Some billionaires support Trump and some don’t. But few billionaires have a good word to say about Sanders or Warren. And the pattern of billionaires backing their Democratic rivals is illuminating.

“Dozens of American billionaires have pulled out their checkbooks to support candidates engaged in a wide-open battle for the Democratic presidential nomination,” Forbes reported this summer. The dollar total of those donations given directly to a campaign (which federal law limits to $2,800 each) is less significant than the sentiment they reflect. And people with huge wealth are able to dump hundreds of thousands or even millions of dollars at once into a super PAC, which grassroots-parched AstroTurf candidate Joe Biden greenlighted last month.

The donations from billionaires to the current Democratic candidates could be viewed as a kind of Oligarchy Confidence Index, based on data from the Federal Election Commission. As reported by Forbes, Pete Buttigieg leads all the candidates with 23 billionaire donors, followed by 18 for Cory Booker and 17 for Kamala Harris. Among the other candidates who have qualified for the debate coming up later this month, Biden has 13 billionaire donors and Amy Klobuchar has eight, followed by three for Warren and one each for Tulsi Gabbard and Andrew Yang. Sanders has zero billionaire donors.

(The 10th candidate who has qualified for the next debate, self-funding billionaire Tom Steyer, is in a class by himself. But with the potential late entry of Michael Bloomberg into the race, perhaps not for much longer.)

Meanwhile, relying on contributions from small donors, Sanders and Warren “eagerly bait, troll and bash billionaires at every opportunity,” in the words of a recent Los Angeles Times news story. “They send out missives to donors boasting how much damage their plans would inflict on the wallets of specific wealthy families and corporations.”

The newspaper added: “Sanders boasts that his wealth tax would cost Amazon owner Jeff Bezos $8.9 billion per year. He even championed a bill with the acronym BEZOS: The Stop Bad Employers By Zeroing Out Subsidies Act would have forced Amazon and other large firms to pay the full cost of food stamps and other benefits received by their lowest-wage employees.”

For extremely rich people who confuse net worth with human worth, the prospect of losing out on billions is an outrageous possibility. And so, a few months ago, Facebook mega-billionaire Mark Zuckerberg expressed his antipathy toward Warren while meeting with employees. As a transcript of leaked audio makes clear, Warren’s vision of using anti-trust laws to break up Big Tech virtual monopolies was more than Facebook’s head could stand to contemplate.

“But look,” Zuckerberg said, “at the end of the day, if someone’s going to try to threaten something that existential, you go to the mat and you fight.”

The fight happening now for the Democratic presidential nomination largely amounts to class warfare. And the forces that have triumphed in the past are outraged that they currently have to deal with so much progressive opposition. As Carl von Clausewitz observed, “A conqueror is always a lover of peace.”