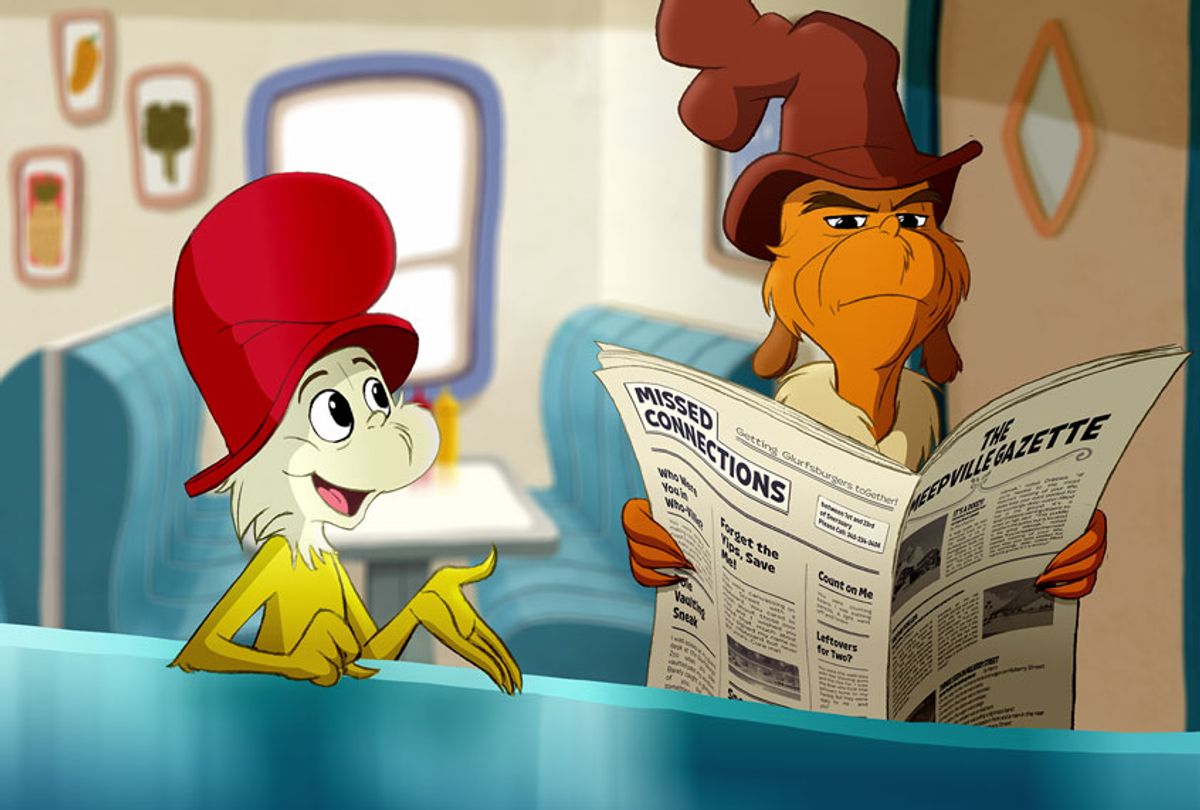 In 2003, the vaguely Seussian hellscape known as the live-action “The Cat in the Hat” film adaptation was released. Packed with an uncomfortable amount of innuendo and bizarre turns by Mike Meyers, who played the title character in a full-on catsuit, it went on to win a number of awards like the Golden Raspberry for Worst Excuse for an Actual Movie (All Concept/No Content) and Worst Screenplay for a Film Grossing More Than $100 Million Worldwide.

It also marked the creation of the The Spencer Breslin Award (Worst Performance by a Child Actor), which was awarded to — you guessed it — Spencer Breslin, who played Conrad Walden, one of the kids  babysat by the cat. To borrow from another adaptation of a beloved children’s book, just thinking about that movie instinctively conjures images of Arthur’s clenched fist for me.

It’s not surprising that in 2004, Audrey Geisel, Dr. Seuss’ widow, said she would not allow any further live-action adaptations of her husband's works.

I know it may seem odd to start a review of a new streaming show by trashing a movie that’s over a decade old, but I think Dr. Seuss’ books hold such meaning for generations of young readers and their parents that it’s important to note how hard it is to translate his work into film — especially when deviating from the words and plot in the source material. That’s one reason that the 1966 “How the Grinch Stole Christmas!” movie played so well; thanks to involvement by Ted Geisel (Dr. Seuss), the adaptation was true to the original’s heart and illustration-style.

Netflix’s “Green Eggs and Ham,” created by Jared Stern, accomplishes this as well, while also expanding the world of the original book (which famously only used a vocabulary of 50 words) in really clever ways to craft a 13-episode adventure . The basics of the series are the same: Sam-I-Am (Adam Devine) is still the optimistic fan of the verdant breakfast dish, who wants to eat it here, there, and everywhere; Guy-Am-I (Michael Douglas) is his curmudgeonly companion who is not feeling it.

But then the plot explodes. There’s an endangered creature called a chickaraffe who is busted out of the zoo. Guy is a failed tinkerer whose inventions all explode; he’s going to have to take a job as a paint-watcher because his ideas aren’t paying the bills. Eddie Izzard voices a subtly Trumpian character — with a mound of living, brassy hair — who collects animals for sport. There are Bad Guys and car chases. All of this is set in an ever-expanding Seuss-inspired world filled with color, texture, and whimsy.

While the show is definitely made with kids in mind, the cast — which includes Diane Keaton, Keegan-Michael Key, and Ilana Glazer , among others — helps make this accessible to adults. There are film references that will appeal to the grown-ups in the room, as well, like a “Les Miserables” parody and some “Shawshank Redemption” call-backs.

But what really gives the show this heart, even more so than the blossoming (if predictable) friendship between odd couple Guy and Sam, is the way the creators of this show have given each of the characters a meaty backstory. We understand their motivations, their shortcomings, and their desires — including why Sam is so attached to a dish that looks a little repulsive. “Green Eggs and Ham” has a sense of heart that transcends age and is greater than just a nostalgia grab.

"Green Eggs and Ham” is now streaming on Netflix