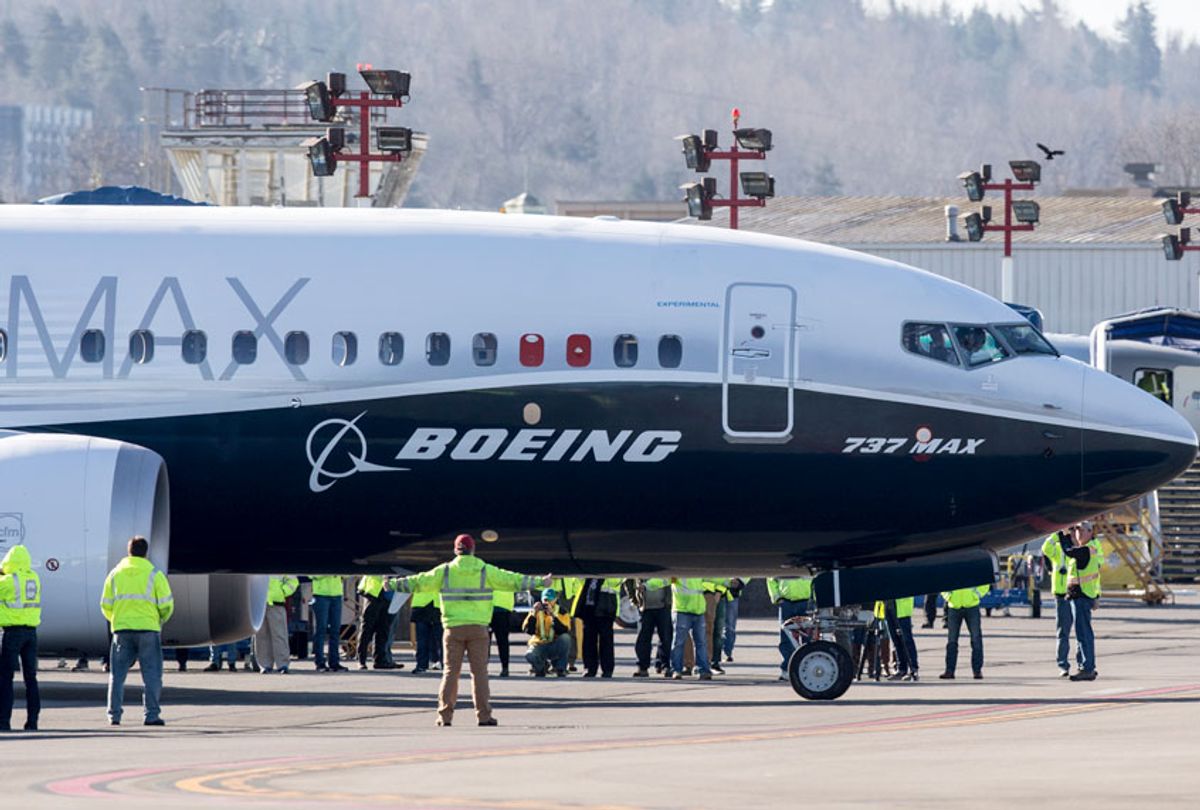 Your government at work: Members of Congress were hot on both sides of the aisle last week about air safety, relentlessly attacking Boeing over safety lapses on the 737 Max.

But they were pretty silent about our government’s role altogether in giving the job of supervising new technology to the air manufacturers themselves.

In other words, it was a lousy review of those charged with keeping us safe—because de-regulation, rocket-fueled by the Donald Trump administration — is the word of the day. Too many rules for safety might affect jobs, they tell us.

So, last week, Boeing and its CEO, Dennis Muilenberg, apologized publicly again, even before sign-carrying family members, for mistakes that led to two international crashes of its 737 Max aircraft. Muilenberg owned up to the fact that Boeing set aside a test pilot’s warning — information that the company had not described in previous testimony.

The apologies came before a Senate committee investigating the safety concerns that were unusual for their bipartisanship and their fierceness toward the company. The testimony came on the anniversary of the first of the crashes in Indonesia, and the planes in question are still not flying.

The messages, which date back to November 2016, were given to the Department of Justice investigators in February but were not released to the Federal Aviation Administration or other regulators until after the second 737 Max crash, months after their discovery. They suggest Boeing may have tried to hide the safety concerns from regulators.

Then House members followed with disclosure of key documents from their own investigation that included an email in which a Boeing engineer questioned in 2015 whether the Max was vulnerable to the failure of a single sensor — the scenario that led to crashes in Indonesia and Ethi­o­pia.

By contrast, Boeing this week said 50 other 737 NG planes should be grounded after discovering structural cracks.

But there has been little congressional concern about the Federal Aviation Administration process itself. Those regulatory procedures were changed to allow companies like Boeing much more responsibility for overseeing safety. Boeing, meanwhile, was busy trying to introduce its new plane before Airbus’ alternative.

You’d think that Congress would care more about what the government is doing to protect the consumer, the flying customer, than about jumping on the company. What did Congress think was going to happen when they gave the regulatory keys to the companies themselves?

A report earlier this month by representatives of the FAA, NASA and nine international regulators, provided the first official detailed account of how federal regulators certified the Max. Lawmakers and federal investigators are still conducting their own inquiries into the design and approval of the jet.

That report found a breakdown in the regulatory system and poor communication from Boeing, which did not adequately explain to federal regulators how a crucial new system on the plane worked, the report says.

The report found that the FAA relied heavily on Boeing employees to vouch for the safety of the Max and lacked the ability to effectively analyze much of what the company did share. It also found that Boeing employees who worked on behalf of the FAA faced “undue pressures” at times during the plane’s development because of “conflicting priorities,” according to the report.

“This report confirms our very worst fears about a broken system,” Sen. Richard Blumenthal, Democrat of Connecticut, said at the time. “To put the fox in charge of the henhouse never made any sense, and now we see the deeply tragic consequences.”

Boeing’s board has stripped Muilenberg of his title of chairman of the board, but he remains as president of the company.

The review scrutinized the FAA’s certification of the Max’s flight control system, including the new automated system, MCAS, which played a role in both crashes. The report found that while the FAA had been made aware of MCAS, “the information and discussions about MCAS were so fragmented and were delivered to disconnected groups” that it “was difficult to recognize the impacts and implications of this system.” The report said if FAA technical staff had been fully aware of the details of MCAS, the agency would probably have required additional scrutiny of the system that might have identified its flaws. The task force recommended that the FAA review staffing levels at its Boeing office in Seattle and review the Boeing office that allows company employees to perform certification work.

My question here is simple: Who besides the mavens in the White House thinks that stripping away regulation from oversight responsibilities in the environment, health and transportation actually believes that we are safer?