Instacart cut bonuses after a strike. Workers suspect it's retaliation

On the heels of a strike, the contractor-dependent company cuts a bonus that many workers relied upon for survival 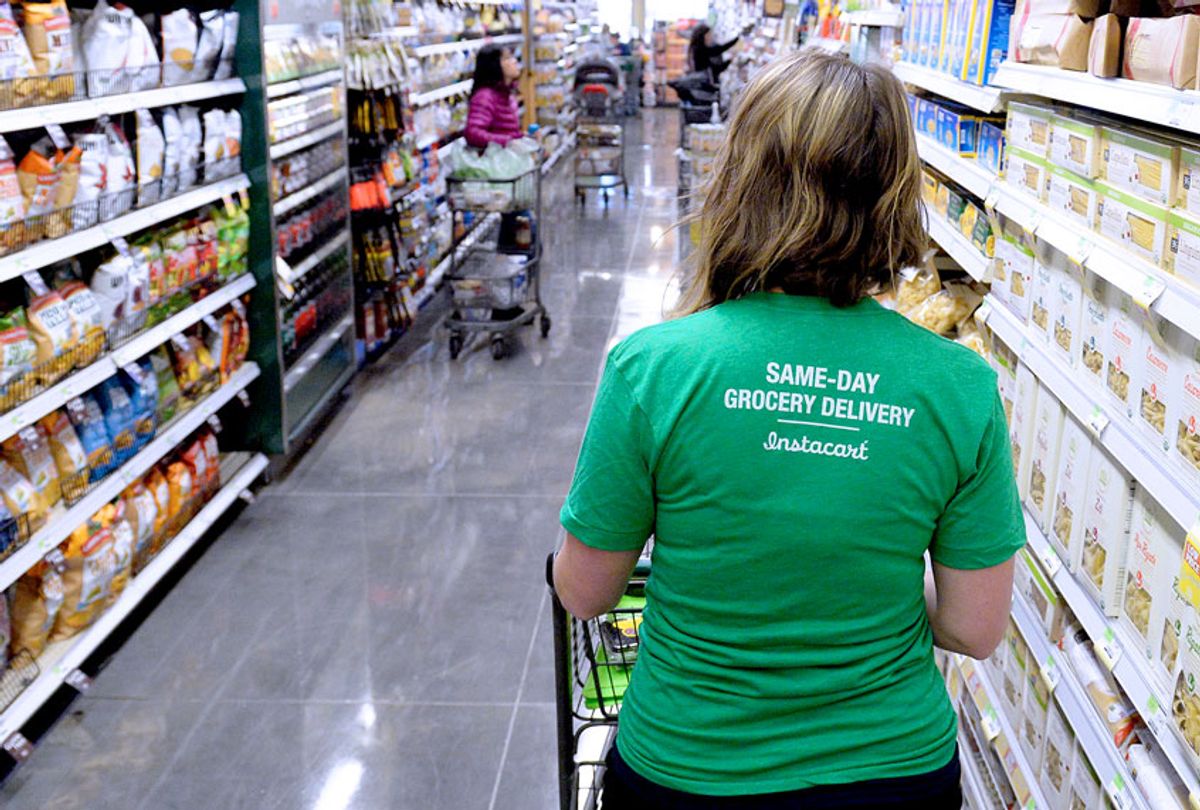 A shopper for Instacart navigates through the aisles as she shops for a customer at Whole Foods in Denver. They receive a grocery list for a shopper and then completes the shopping. (Denver Post Photo by Cyrus McCrimmon)
--

One week after thousands of Instacart workers took part in a 72-hour strike, the San Francisco-based company — which promises same-day grocery deliveries by paying gig workers to pick up things at the grocery store for “busy” people — made an announcement: They were cutting a bonus that their shopper contractors received for quality work.

Shoppers received the news via an email from the company, which read:

Over the last several years, we’ve experimented with numerous versions of the quality bonus, in addition to other boosts and incentives. During the last year, we offered a new version of the quality bonus and found that it did not meaningfully improve quality. As a result, we will no longer be offering the quality bonus beginning next week. We value the quality of service shoppers provide and will continue exploring ways to recognize shoppers who deliver a high-quality experience for customers.

The bonus in question was implemented last year, and gave workers $3 for every 5-star rating they received. While the company claims the cut was planned before last week’s strike, this pay cut is raising tensions between the company and its shoppers, who aren’t classified as employees, but rather independent contractors. Like many independent contractors in the gig economy, Instacart shoppers don't receive hourly wages or salaries, but are paid per gig — meaning that small bonuses, like $3 for each 5-star rating, can add up to between $45 to $80 a week for some shoppers.

“You don’t think about three dollars being a lot of money, but you add up a whole lot of three-dollars and it builds up,” Heidi Carrico, an Instacart shopper living in Portland, Oregon, told Salon. “It’s disheartening to know we have customers who will take the time to rate us, and for a company that is so immoral and unethical that they would cheat us out of three dollars.”

Carrico estimated she will lose about $45 a week in wages. When she first started shopping for Instacart a year and a half ago, she would make between $600 to $900 a week while working three days a week. Now, she is available to work seven days a week, and she is making around $300. Carrico said she is losing money on the job now when factoring in additional expenses like gas. In Portland, the minimum wage is $12.50, but sometimes she can take a job that will take an hour, or more, and receive only $8.

Shoppers used to be paid 40 cents per item, with bonuses and tipping sprinkled in, but last October the company began using an algorithm to calculate pay. Factors included were product weight and driving distance. Shoppers are guaranteed at least $5 per delivery, although it has been previously reported that when all pay and costs were factors in, some shoppers made as low as $1 an hour. Over the last three years, Instacart has gone back and forth from allowing customers the option to tip shoppers, and suggesting a 5 percent default tip. In February, NBC News reported tips were being used to substitute a portion of workers' wages rather than boost their incomes.

This latest labor pain comes on the heels of a class-action lawsuit that alleges Instacart “intentionally and maliciously misappropriated gratuities in order to pay plaintiff’s wages even though Instacart maintained that 100 percent of customer tips went directly to shoppers.”

It has been a rough ride for many Instacart shoppers, who have seen their incomes from the app slashed significantly — which is why when the company announced the latest $3 elimination, it was easy to interpret it as some sort of retaliation for the strike. Instacart denied to talk to Salon on the record about anything beyond the email that was sent to its shoppers.

Alyssa Longobardi, who has been working as an Instacart shopper both part time and full time in the Philadelphia suburbs on and off since 2015, told Salon it will “absolutely” impact her pay.

“There were payouts on orders I just refused to take due to how low they were for the amount of time, effort and gas that would need to be used to complete it,” she said.

Susan Caffaro, in San Diego, California, has been working since February. She estimates she might lose up to $90 a week.

“It’s a little motivation that helps you work that much harder,” Caffaro told Salon.

While the cut might not come as a surprise to the workers who have been privy to the company's treatment of them over the last couple years, the move has rattled many customers, many of whom have taken to social media to announce they are boycotting Instacart, spreading the #DeleteInstacart hashtag on social media. Shoppers are hopeful that the customers getting involved will put pressure on the company to meet shoppers’ demands and treat them better.