Sterling K. Brown reflects on fatherhood and not being average in life or his new film “Waves” 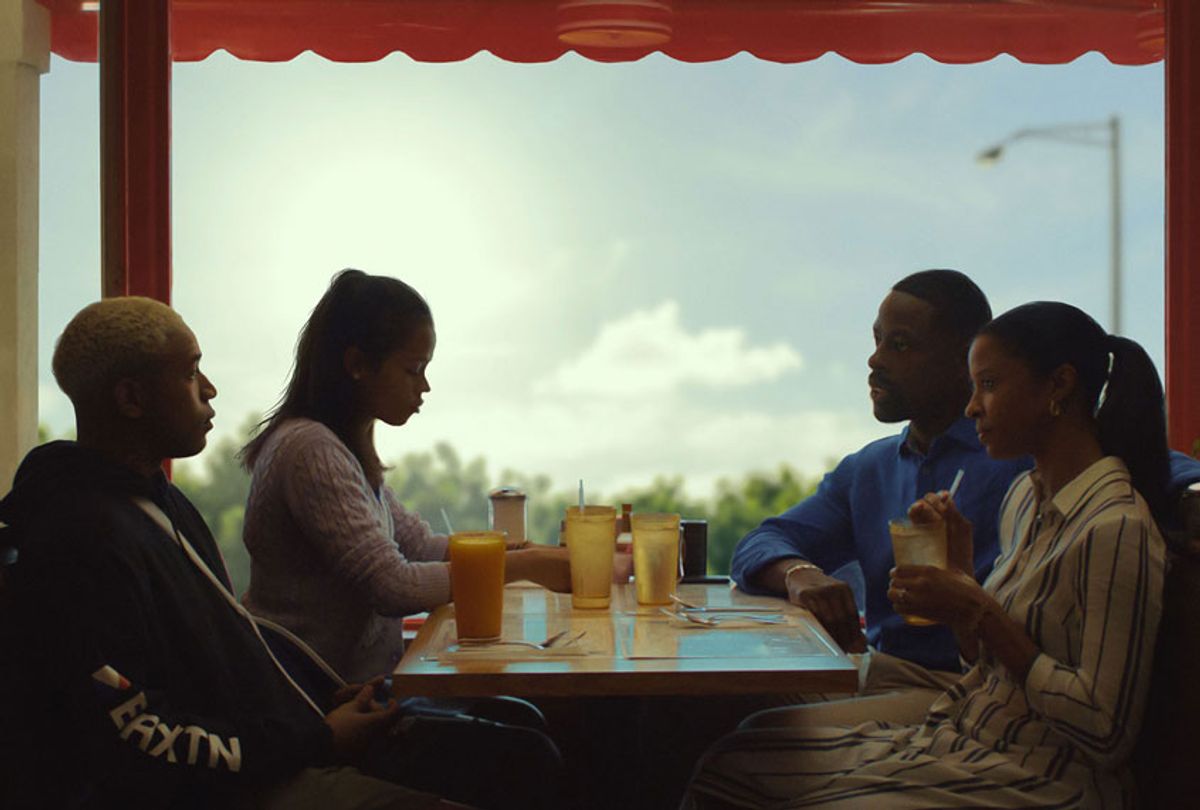 In the bold, intense new film, “Waves,” Sterling K. Brown plays Ronald, the father of two teenagers, Tyler (Kelvin Harrison Jr.) and Emily (Taylor Russell). Tyler, a high school senior, is a wrestler, and Ronald trains him. He is hard on his son, because he wants him to succeed. Ronald even tells Ty, “We are not afforded the luxury of being average.” As Tyler’s story plays out, however, “Waves” shifts to tell Emily’s story, which involves a poignant heart-to-heart she has with her father.

Ronald may be a dad who is as driven as Randall Pearson, the father Brown plays on “This Is Us” (and for which he won an Emmy), but the actor disappears into his role in “Waves.” He shows his strength — both physical and emotional — as well as his vulnerability as his family experiences moments of crisis and catharsis. The film’s title suggest that the effects people have on one another are larger than ripples; they are waves.

In a recent interview, Brown spoke with Salon about his new film, fatherhood, and what lessons he learned as a teenager and imparts as a parent.

Ronald is self-described as a wise and noble father in “Waves,” and even “Randall” on “This is Us” is a caring father. You are a dad in real life. What are your observations on fatherhood and the importance of family?
Fatherhood is everything to me, man. The best role I had is the day my first son was born, and I got to call myself a father for the first time. I only had a dad for a limited amount of time — 10 years — and to step into his shoes and pass on the love I had to my son is everything. I enjoy paternalist roles because I enjoyed the dad I had and who is still with me in my heart.

Can you describe what you were like as a teenager? Were you anything like Tyler or Emily?
Ah, let me see. I was an athlete: football basketball, track, and ultimate frisbee. I was driven in how I wanted to be. I was fairly competitive, but I wasn’t ever deeply rebellious. I had moments where I drank in high school, but because I did, I was over it by the time I got to college. My dad was gone, so I didn’t reach a point and time where we had to vie for who was the man of the house. My mother and I have been very close. I don’t share everything in my life with her, but she fostered an open relationship that if I wanted to share anything, I could have.

Ronald counsels Tyler to take pride in what he does. What lessons that you learned had an impact on you at a young age?
I went to an all boys school, St. Louis Country Day, and I found myself glomming onto other people’s dads. I was not looking to replace my dad but to find an appreciative adult male for instruction or attention. I think my desire to be an athlete and go to a good college went hand in hand, because I was taught the way you practice on the field and the way you study in the classroom, are how you should approach anything in life: with vim and vigor. I went to Stanford. I liked being a parent’s wet dream when it came to the stats. It was easy to get parents of girlfriends to like me until I became an actor.

My mother had expectations of me, and she was a schoolteacher. She saw how young black men tracked the lowest common denominator, and she knew she wanted more for me, so she made me go to this school. It was one of the best things she ever did for me. Everyone was bright so there were no stigmas for being a nerd. We had to do three sports a year, so there were no stigmas for being a jock. And you could be a theater geek at the same time. When you are surrounded by overachievers, you feel that that is the expectation, and it becomes your normal.

Ronald says he pushes Tyler because he has to, but he neglects Emily for reasons that become clear. How did you calibrate your performance which ranges from strength to vulnerability in your scenes with each teen?
I was taught at a young age — from multiple people in my family — that your actions are a reflection of more than just yourself, but your family and the community as a whole. People are watching you and you don’t have the luxury of being average or making the same mistakes as white people. There are ramifications if you mess up. The next person with an opportunity may not be given the benefit of doubt. You have to do better not just for yourself but for the advancement of the community as a whole. Is that fair? It’s debatable, but I perceive it as true. I still live with the idea that if I don’t do well —whatever doing well means — that for anyone younger coming up after me, I can make it easier. I stand on the shoulders of everyone who came before me, and I want to honor their memories for people who come up after me. That’s ingrained throughout childhood. When you are one of a handful of African American students at a college prep school, you don’t get a chance to blend in.

Ronald is passing this on to his son in a very real way. He doesn’t want his son to be dismissed, he wants to see him survive and be excellent as a black boy in Florida. His grandfather did not get same opportunity as his son, and he wants that opportunity to be take advantage of. That level of pressure is claustrophobic, but Ronald doesn’t create the space for his son to express how he is dealing with the pressure he is feeling. Tyler can’t share these things with his father, who will be disappointed, and nothing terrifies him more.

With Emily, Ronald admits he hasn’t checked in with her. Only they know what they are both going through. He has to share what’s going on in his life to have his daughter share what’s going on in her world. It’s him realizing that his unshakeable strength, and that facade of being a rock, can no longer be maintained. His vulnerability allows his daughter to come closer to him.

Ronald tries to defuse a tense situation in one critical scene. How do you cope with crisis? Are you calm or easily enraged?
I think we all experience the gamut of emotions during pressurized situations. When my wife had our first child, we planned a natural birth. But from the time of first contraction to delivery, it was three-and-a-half hours. That was fast. I delivered my first son with the midwife on phone coaching me. I knew my freaking out would alarm my wife, and I wanted her to be calm. I tend to be the dude who doesn’t get too hysterical.

“Waves” is about how people connect (or don’t) and the impact that has on several families. Can you talk about how we all connect?
There’s a book, “The Conscious Parent” by Dr. Shefail Tsabary, that shows how to talk to the next generation and be heard. Learning is a two-way street. Our children have as much to teach us as we parents have to teach them. We need to create space and nurture so everyone will feel free to express themselves fully. Even though we will have disagreements and arguments, we will never lose our love. Communication is the key to creating the most authentic relationship possible.