"This is clearly a form of anti-Semitism to levy these attacks against a Jewish staffer," a Trump official claimed 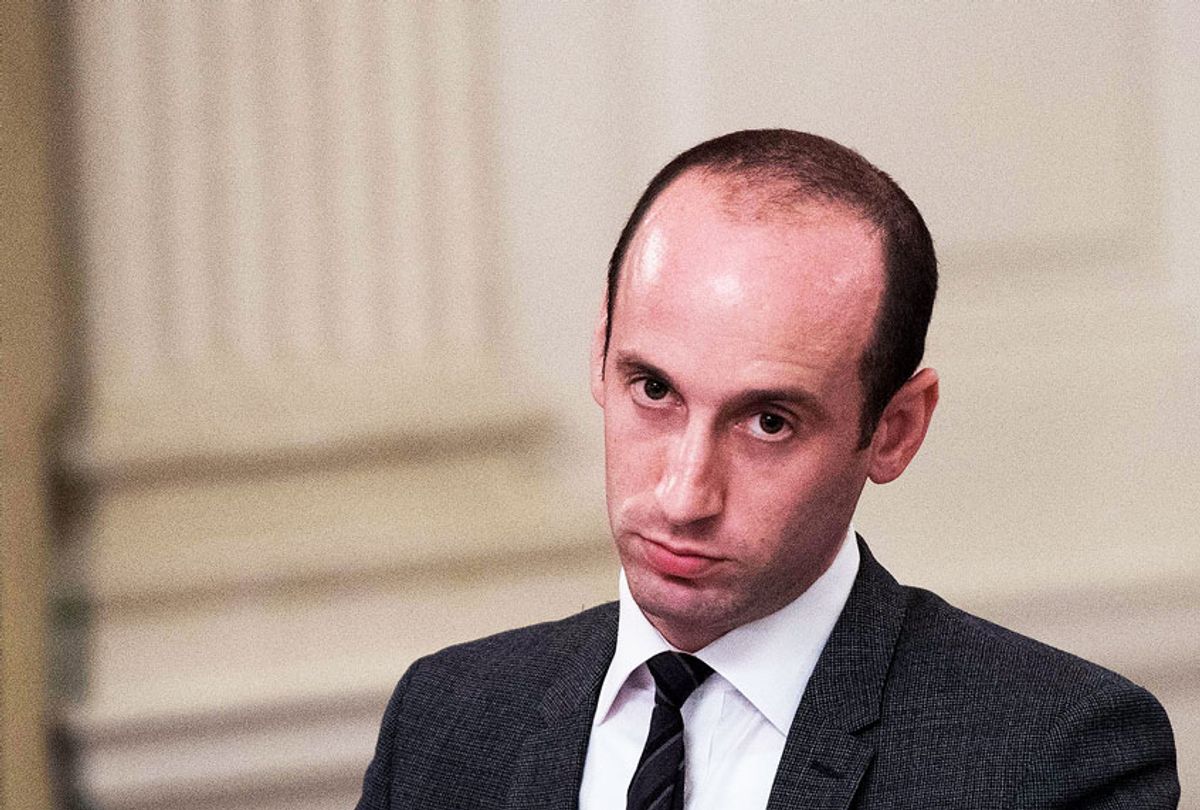 The White House claimed that Trump adviser Stephen Miller was the victim of “anti-Semitism” and smears after leaked emails showed that he promoted white nationalism and anti-immigrant rhetoric through the far-right news outlet Breitbart.

The Southern Poverty Law Center published a report Tuesday titled “Stephen Miller’s Affinity for White Nationalism Revealed in Leaked Emails,” which was based on more than 900 emails Miller sent to Breitbart editors between 2015 and 2016. The emails were given to the SPLC by Katie McHugh, a former Breitbart editor who was fired in 2017 for posting anti-Muslim tweets and has since denounced the far-right.

The emails show that Miller was regularly in contact with Breitbart editors in the 15 months leading up to the 2016 election. In them, Miller regularly referenced reports from the white nationalist site VDARE, the white supremacist site American Renaissance and the conspiracy theory repository InfoWars. Miller urged editors to play up crimes committed by immigrants and people of color and sought to “create a narrative” about the removal of the Confederate flag after the 2015 mass shooting at an African-American church in Charleston, South Carolina.

Michael Edison Hayden, the SPLC staffer who published the emails, wrote that he was “unable to find any examples of Miller writing sympathetically or even in neutral tones about any person who is non-white or foreign-born.”

McHugh suggested that the emails from Miller, an immigration hardliner who was behind the Trump administration’s most controversial assaults on immigrants, offer a glimpse into the policy advice he has likely given the president.

"What Stephen Miller sent to me in those emails has become policy at the Trump administration," she said.

While Miller has yet to comment on the report, a White House official asserted that the Trump adviser was the real victim.

"This is clearly a form of anti-Semitism to levy these attacks against a Jewish staffer,” an unnamed White House official told Axios.

White House press secretary Stephanie Grisham told The Washington Post that she had not seen the report but claimed that the SPLC, a respect civil rights nonprofit, was an “utterly-discredited, long-debunked far-left smear organization,” even though the emails were handed to them by McHugh.

“They are beneath public discussion, even in The Washington Post,” Grisham said.

Miller’s allies have played the anti-Semitism card before. Donald Trump Jr., Rep. Lee Zeldin, R-N.Y., and others accused Rep. Ilhan Omar, D-Minn., of anti-Semitism when she called Miller a “white nationalist” on Twitter in April.

Omar fired back Tuesday at her critics.

“As I said earlier this year: Stephen Miller is a white nationalist. And now we have the emails to prove it,” she wrote. “This type of racism and hatred has no place in our government. Miller needs to step down. Now.”

“Donald Trump put a Neo-Nazi in charge of immigration policy,” Castro tweeted. “Both him, and Stephen Miller, are a shame to our nation.”

The emails also appeared to cross a line for some on the right.

“A damning email dump from former Breitbart editor Katie McHugh points to Miller simply being a racist who hates immigrants,” columnist Tiana Lowe wrote at the right-wing Washington Examiner. “Interns have been fired for less than this. We can't say with certainty what hate is or isn't in Miller's heart, but we know that he was happy enough to use the work of hatemongers and kill the GOP's last shot at immigration reform, apparently because it would help predominantly Mexican immigrants. It's long past time for Trump to dump Miller.”