“Dollface” is the comfortable yet unremarkable grey sweatpants of friendship comedies

Hulu's new female-centric series may be derivative, but if you're in a quarterlife crisis, it goes down smoothly 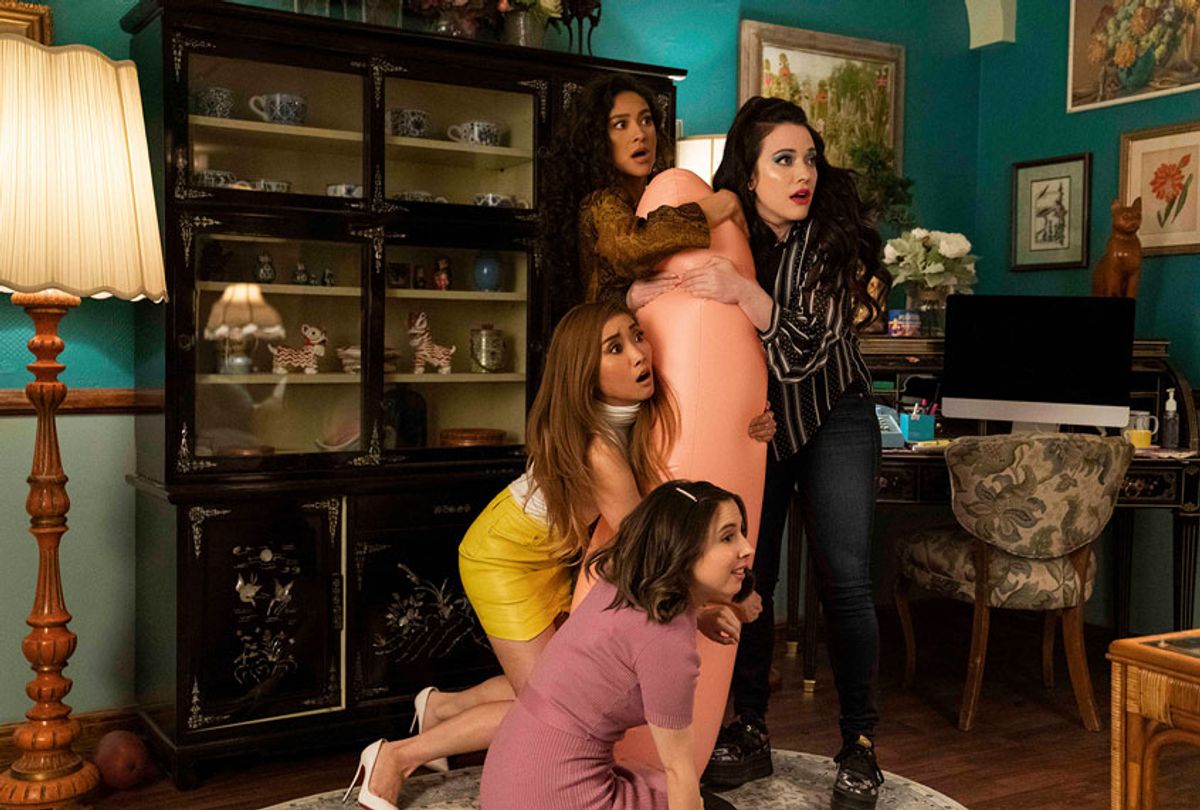 Those of us who watch television for a living are in the habit of referring to the Peak TV deluge in disparaging terms.  This is both understandable, and justifiable. It’s a little like being a Brita filter and discovering that the pitcher you’ve been tasked to manage has suddenly transformed into the world’s largest whitewater rapids, frothing up pebbles and soot along with power and majesty.

Nevertheless, this era has a few distinct advantages for consumers. For one thing – probably the most important thing – there is probably a show or a movie tailored to address whatever specific crisis you may be enduring on any given day.

One might also think of it as a full series version of the famous “Sex and the City” post-breakup party rampage episode “The Post-It Always Sticks Twice.” Or a 500 percent less irritating version of “2 Broke Girls,” and I’m not just saying that because it stars Kat Dennings. It’s a little bit of all those simple pleasures mixed together, like some imaginary special-edition Ben and Jerry’s mix-up of popular, unchallenging tastes swirled in a slightly novel way.

With its 10-episode season dropping all at once, it’s also ready to accompany you for a long couch slump in your favorite soft pants.

Despite what that description might indicate, “Dollface” is not for everybody. Neither does it aspire to be an original, groundbreaking work in the mold of “PEN15” or “Shrill,” two Hulu shows created by and starring women that sort through the frustrations and challenges that come along with being a woman in the world.

Incredible performances, incisive dialogue, and unique takes on otherwise familiar scenarios ("PEN15" is an awkward coming-of-age story, "Shrill" a tale of a young woman coming into her own) make these shows resonate with a broad audience and critics.

I have little doubt that they'll show up on many "Best programs of 2019" lists. But a person does not necessarily think of them as go-tos for soothing a quarter-life crisis.

“Dollface,” meanwhile, is a fizzy bath of seen-it-already tropes playing out through characters that might as well have been generated by an online personality quiz. The central foursome consists of Dennings’ Jules, an deadpan, too-tired-to-keep-up-with trends everywoman; Brenda Song’s Madison, a polished, tightly wound but highly successful diva; Shay Mitchell’s Stella, a fun-loving if insecure party girl; and Izzy (Esther Povitsky), who, as her name suggests, is a loopy agent of a chaos.

Even the launching point for “Dollface” is one we’ve previously seen in countless guises: Dennings’ Jules believes she’s happily coupled up with her boyfriend Jeremy (Connor Hines), only to be unexpectedly and unceremoniously dumped. At brunch no less. (Not sacred brunch! Yes, brunch.)

In the many, many other TV shows and movies where this very horror happens, Jules would call her Amazonian squad to rally around her.

Problem (and, indeed, the point of the entire series) is that Jules poured all of her energy into her relationship with Textbook Terrible Boyfriend Jeremy, abandoning her stable of confidantes for his friends and his activities and his life. He even treats the apartment they share as basically his, coming and going as he pleases and expecting her to leave so as not to make it awkward with the friends they once shared but are now understood to be his solely.

So Jules returns to the barely welcoming arms of her jilted former besties past one by one, starting with Madison the PR maven before sidling up to Stella, whose mysteriously fabulous life allows Jules to bother her whenever and wherever.

Working at a Goop-inspired fashionista site called Woöm doesn’t grant Jules much guidance or solace, either. But it does give Malin Akerman a terrific opportunity to spoof Gwyneth Paltrow’s ice goddess influencer persona as Jules’ boss Celeste, a manager who speaks in koans and barely masks her tyrannical tendencies with a practiced, blissed-out grin. This also is the show's means of connecting Povitsky’s space-case Izzy with the rest of the gang, who don’t befriend this lost, dangerous puppy so much as adopt her.

Dotted throughout each episode are a series of fantasy sequences illustrating Jules’ generally bumpy re-entry into the World of Womanhood, daydreams that are frequently hosted by a wise-cracking, all-knowing lady with the head of a cat (voiced by Beth Grant).

Although the glossy production of “Dollface” make these excursions into Jules’ psyche pop and sparkle in juxtaposition to her glum mood, other comedies have employed these intersections between reality and fiction with more originality and better dialogue. They fit the overall tenor of “Dollface,” giving rise to a smile but rarely meriting an audible laugh.

But who knows? Instagram-obsessed 20-somethings probably don’t care nearly as much about every derivative detail in a comedy like “Dollface.” In our age of specialized, personalized entertainment, there are less pleasant propositions than the offer of spending time with an ephemeral half-hour starring a team of actors who demonstrate crisp comedic timing and manage to be engaging despite the show's average scripts.

Song’s whip-smart straight-woman commandeers each scene, making Povitsky's scene-stealing weirdness come off as all the sharper and even slightly deranged at times.

Besides, the platonic relationships of women will always be among television’s most reliable drivers. If  that weren’t the case we wouldn’t care as much as we do about “The View,” which confirms a number of negative stereotypes about the female bond on at least a weekly basis even if, behind the scenes, its players (each a character in their own right) insist that they all get along, that conflict is part of the show.

Typically, however, the friendship aspect of a story gets examined as a secondary element of the main action. The hallowed “Sex and the City” ( a go-to example, sure, but only because multiple generations get the reference) is ostensibly about the resilience and necessity of keeping one’s friends as close as ones mates and lovers, but most of their examples of being there for each other have something to do with the men in their lives.

At least “Dollface” flips that emphasis, with Jeremy’s dumping Jules serving as a catalyst to refamiliarizing herself with the complex, delicate negotiation of relationships the women in her life have with her and each other. They do meet and date men (played by the likes of Goran Visnjic, Matthew Gray Gubler, Michael Angarano and, in a memorable sixth episode cameo, Macaulay Culkin)  with varying degrees of success. But most of the conversation and conflict revolves around relationship unrelated topics such as career and life choices, or trust and secrets.

Stella, Madison and Jules are salubrious supports to one another except in the moments where they snip at each other. Jules is a buzzkill, we’re informed in a courtroom reverie, but only because somebody has to be in order to keep a bad situation from worsening.

And “Dollface” reminds us yet again why Dennings’ droll comedic persona serves as the steady core of a project like this. “2 Broke Girls” might have been dismissible broad network pabulum, but its insistence on aiming for the low end of comedy’s middle road was the problem, not her. “Dollface” allows her to break out of those constraints, which is why despite its seen-it-before sameness, watching the comedy start to finish is entirely too simple to do.