The six students struck by gunfire included the suspect, who had self-inflicted gunshot wound 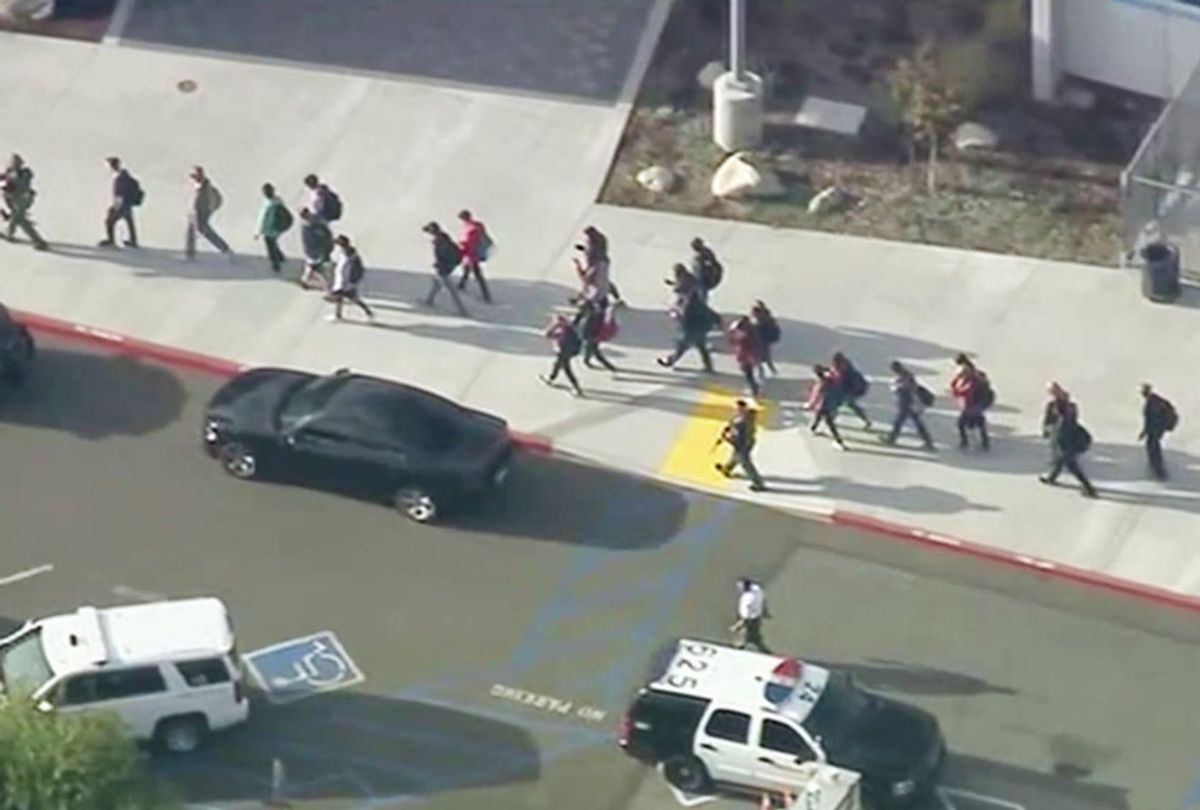 People are lead out of Saugus High School after reports of a shooting on Thursday, Nov. 14, 2019 in Santa Clarita, Calif. The Los Angeles County Sheriff’s Department says on Twitter that deputies are responding to the high school about 30 miles (48 kilometers) northwest of downtown Los Angeles. The sheriff’s office says a male suspect in black clothing was seen at the school. (KTTV-TV via AP)
--

A 16-year-old student pulled a handgun out of his backpack and opened fire on classmates at a Southern California high school Thursday morning, striking six people before turning the gun on himself.

The shooter, now in custody, opened fire in the school's quad before the start of classes. He survived his self-inflicted gunshot wound and is in grave condition at a local hospital, police officials said at a news conference. Police said the suspect carried out the shooting on his 16th birthday.

A 16-year-old female student and a 14-year-old boy died after being taken to Henry Mayo Newhall Hospital in Venice, officials said. A third person was in critical condition and a fourth was treated and released.

Two other girls were taken to Providence Holy Cross Medical Center and were all talking when they arrived. One girl was said to be in fair condition and the other in good condition. A seventh person was treated for injuries that were not critical.

Officials would not say where the suspect was being treated.

All of the victims and the suspect attend the school in Santa Clarita.

"We identified who the shooter was through first-hand witnesses, video surveillance, we confirmed it," Villanueva said. "We then executed a search warrant at the residence of the suspect, and we're now going through the very-lengthy process of conducting a through investigation to figure out what happened and why."

Law enforcement officials said just 16 seconds passed from the time the shooter drew his gun and when he shot himself.

LASD Homicide Bureau Capt. Kent Wegener said the suspect's mother and girlfriend are at the police station with detectives.

"Detectives have reviewed the video at the scene, which clearly shows the subject in the quad withdraw a handgun from his backpack, shoot and wound five people and then shoot himself in the head," Wegener said. "There are no other subjects who are outstanding as part of this incident or who took part in the assault."

Officers recovered the weapon used in the incident — a .45-caliber semi-automatic pistol — and said it had no more bullets in it.

"If you live in neighborhoods anywhere near Saugus High, PLEASE LOCK DOORS and stay inside. If you see suspect, male dark clothing, in backyards, etc. CALL 911," the office tweeted before the suspect was located. "Parents, deputies are on scene everywhere protecting your children."

All schools in the William S. Hart Union High School District were initially placed on lockdown. All schools, with the exception of Saugus High School and Arroyo Seco Elementary, have been reopened and are classes are set to continue as scheduled.

"We need to interview every student at Saugus High School before they can be released to their parents. We need to conduct a thorough investigation. We apologize for the wait," Los Angeles County undersheriff Tim Murakami tweeted, adding every student "could either be a witness, provide important information about the shooter or a possible motive."

An area was set up for parents to reunify with students at a park about three miles from the school.

Mike Kuhlman, deputy superintendent of the William S. Hart Union High School District, said in a statement that school officials "have arranged to have the Activities Center open from 5-7:00 this evening for students and community members to gather and receive support.  We will have counseling support available at that time.  We welcome everyone to join us."

"Our hearts go out to the families of those affected by this terrible incident," he continued. "Words are insufficient in times such as these."

California Gov. Gavin Newsom said his office was monitoring the situation and in communication with law enforcement.

"Our kids are living in fear, wherever they live, they are living in fear," Harris said. "This is yet again another reason why they are so afraid, that literally they will die. It's tragic in the most fundamental way. It is tragic. it is senseless. it is unnecessary. It is devastating."

She called for "reasonable" gun safety laws in the United States and declared, "Enough is enough."

Another Democratic presidential hopeful, Massachusetts Sen. Elizabeth Warren, wrote on Twitter, "I'm heartsick for the victims of this horrifying shooting and their families. We shouldn't have to live like this. Students shouldn't live in fear when they go to school. We must act now to end gun violence."

"This must end. Children in America should not live in fear for their lives at school or anywhere else. We have a moral obligation to say: children's lives are more important than gun manufacturers' profits. We must pass common sense gun safety legislation," said Vermont Sen. Bernie Sanders, another 2020 contender.