In the right-wing media universe, Trump is winning and impeachment is a joke

In between conspiracy theories, Fox News portrays hearings as a massive Trump victory over the hapless nerds 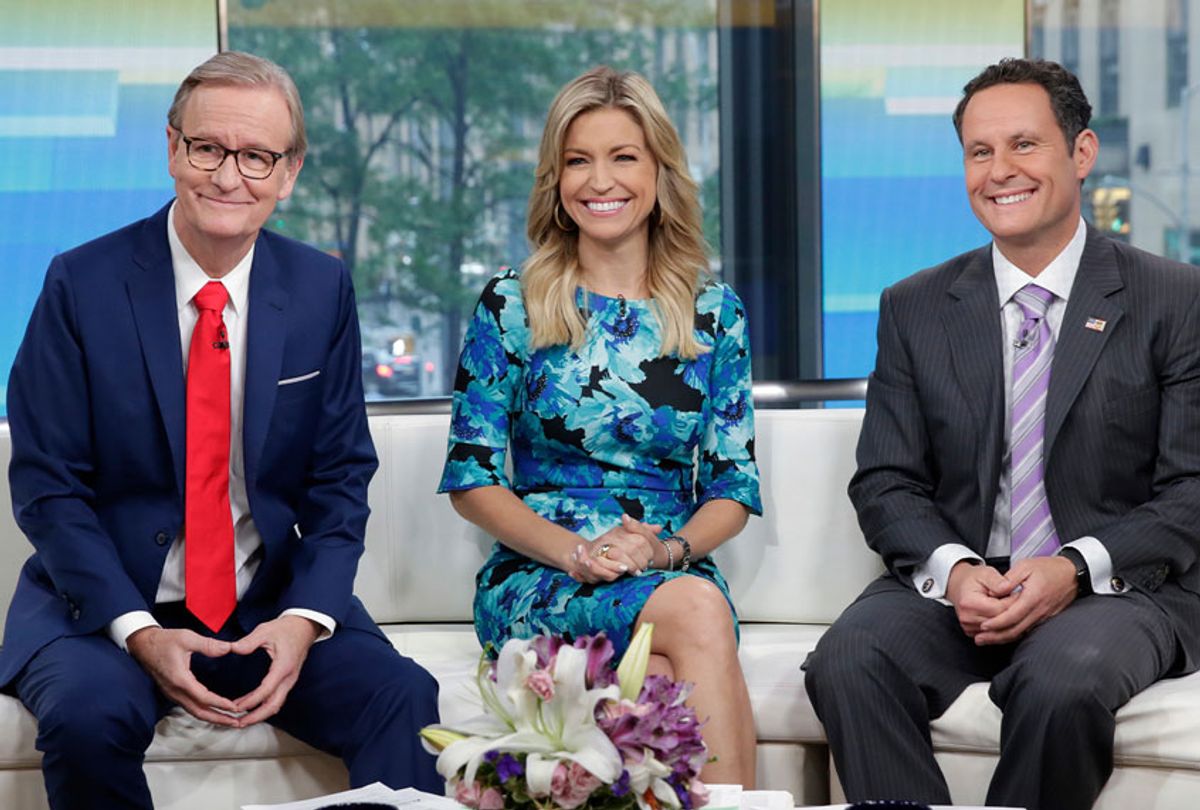 There was a lot of talk on Thursday about the theater criticism of the impeachment hearings coming from some quarters of the mainstream media. Press Watch's Dan Froomkin wrote a must-read piece here at Salon taking them to task for trivializing the event and creating the impression among many people who didn't watch the live testimony that it was boring and worthless. This is another example of the media's insatiable need for drama, explaining once again how Donald Trump, a carnival sideshow act if ever there was one, wound up in the White House.

The Trump TV flagship, Fox News, adopted a novel way of spreading its own propaganda during the hearings themselves. In the guise of on-screen, pop-up  informational cards about the witnesses, they delivered Trump talking points. Media Matters' Eric Kleefeld gathered several examples, notably those in which House Intelligence Committee Chairman Adam Schiff, D-Calif., is described on screen: 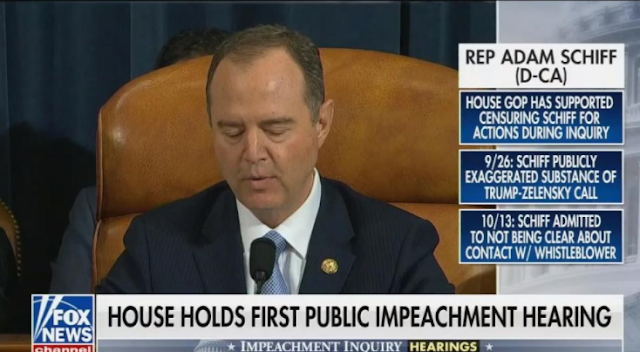 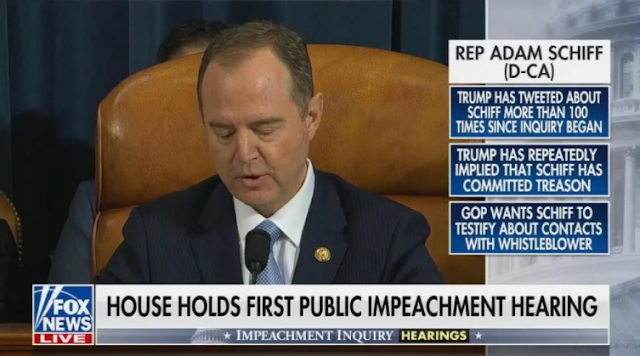 Bill Taylor, the acting ambassador to Ukraine, was helpfully described this way: 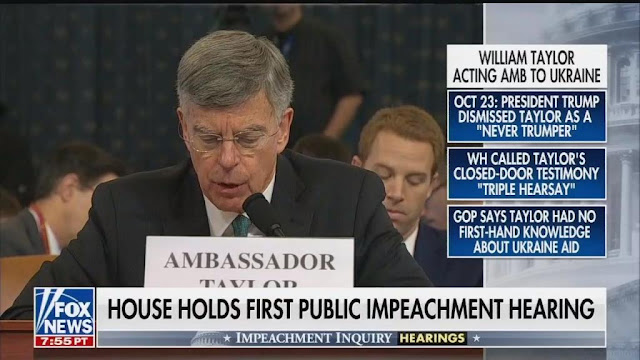 Deputy Assistant Secretary of State George Kent was similarly characterized as someone who had no first-hand knowledge of the events to which he was testifying. This was, of course, the lame official talking point of the day, carried forth by every right-wing media talker on TV and radio, apparently sure that no one would notice that the most damning "first-person" information had been public for weeks: the White House "rough transcript" of President Trump flagrantly attempting to bribe the president of Ukraine. These witnesses were merely filling in background details of the conspiracy that Trump and his henchmen had been plotting for months.

Fox News' evening opinion shows went a step further and described the hearings as a devastating defeat for the Democrats and an overwhelming victory for President Trump. Indeed, after watching for a couple of hours, Fox viewers could easily assume that the Democrats were going to have to close down the inquiry immediately.

Tucker Carlson thought the glass was half full, saying "it was like Christmas and New Year's and the Super Bowl all put together." Sean Hannity took the opposite tack, calling it "the worst show on earth" and dubbing the Democrats on the committee "dumb, bad, stupid and shallow corrupt idiots." Each in his own way surely reassured the president and his supporters that the Democrats had completely failed to deliver and it had all been a rousing success for him.

In between those two guys, Laura Ingraham made fun of the witnesses and declared that the Democratic impeachment had collapsed.

Meanwhile, right-wing operative Joe diGenova and his wife Victoria Toensing, both of whom are professionally involved in the case — having worked with Rudy Giuliani to spread nasty rumors about Friday's witness, former Ukraine ambassador Marie Yovanovitch — appeared with Lou Dobbs on Fox Business and declared that the State Department and FBI agents on foreign assignment are all controlled by George Soros, who for some reason is trying to take over Ukraine.

Joe McCarthy would have been proud. That odious anti-Semitic comment drew a rebuke from the Anti-Defamation League, along with a demand that diGenova be barred from appearing on the network.

That ugly accusation made the rest of the juvenile insults hurled at Taylor and Kent seem tame by comparison. One guest on Carlson's show said they "looked like people who sat by themselves at recess." Hannity guest Mark Levin said they reminded him of "two homeless guys." On talk radio, Rush Limbaugh mocked them as "self-important nerds who believe in their own superiority."

All these people thoroughly enjoyed themselves.

The upshot is that right-wing media, led by the mothership Fox News and the White House, all took the tack that the hearing on Wednesday was a massive success for the president, largely because the Democrats and the witnesses are creepy, unattractive people.

Conventional wisdom holds that this is all done for an audience of one: the president. There is some truth to that, to be sure. Trump is obsessed with media coverage, and if the idea is to buck him up, this absurdly positive spin probably had an effect. But he isn't the only one listening, unfortunately.

On Thursday, AP-NORC released a new survey showing that Americans are having a hard time figuring out what is true and what isn't. And a certain subset is relying on extremely unreliable sources:

Democrats are more likely to say they rely on scientists and academics, while Republicans are more likely to trust what they hear from President Donald Trump. “When I hear him on Fox News — that’s where I get all my information,” said Al Corra, a 48-year-old Republican from Midland, Texas. Trump, he said, is the easiest way to cut through an otherwise confusing information environment.

Republicans are more likely than Democrats to put a great deal of trust in the president’s statements, 40% to 5%.

You can understand why right-wing media would spin the impeachment inquiry as positive news for Trump. Their audience considers him to be a truth-teller and a man of integrity.

Recent PRRI polling shows that Trump has a solid base of support among Republicans, who say nothing he could do could change their minds about him. What people in this group have in common is the fact that they get all their news from Fox, like the man quoted above.

These people are fearfully misinformed, obviously. Trump is the most dishonest person in public life and lies to their faces every single day. Fox amplifies his lies and delivers more of their own in a constant feedback loop. As we continue down the path of impeachment over the next few weeks, it's clear that won't just see Trump and his defenders batting back the accusations or spreading alternate conspiracy theories. They'll do that, of course. But from the looks of things they've decided to offer their viewers a full-blown alternate reality in which the impeachment process is actually an ignominious defeat for the "nerdy" Democrats and government officials and a triumph for the president, regardless of what is uncovered.

I knew this was going to be a strange and different process than the two other impeachments I've seen in my life. But I didn't see this coming. Fox News and the right-wing echo chamber are consciously attempting to make Trump supporters happy that he's being impeached.