I lost my hearing overnight. Here's how I coped with my new silence

How does a music lover learn to live without sound? The answer for me: sensorial diversity 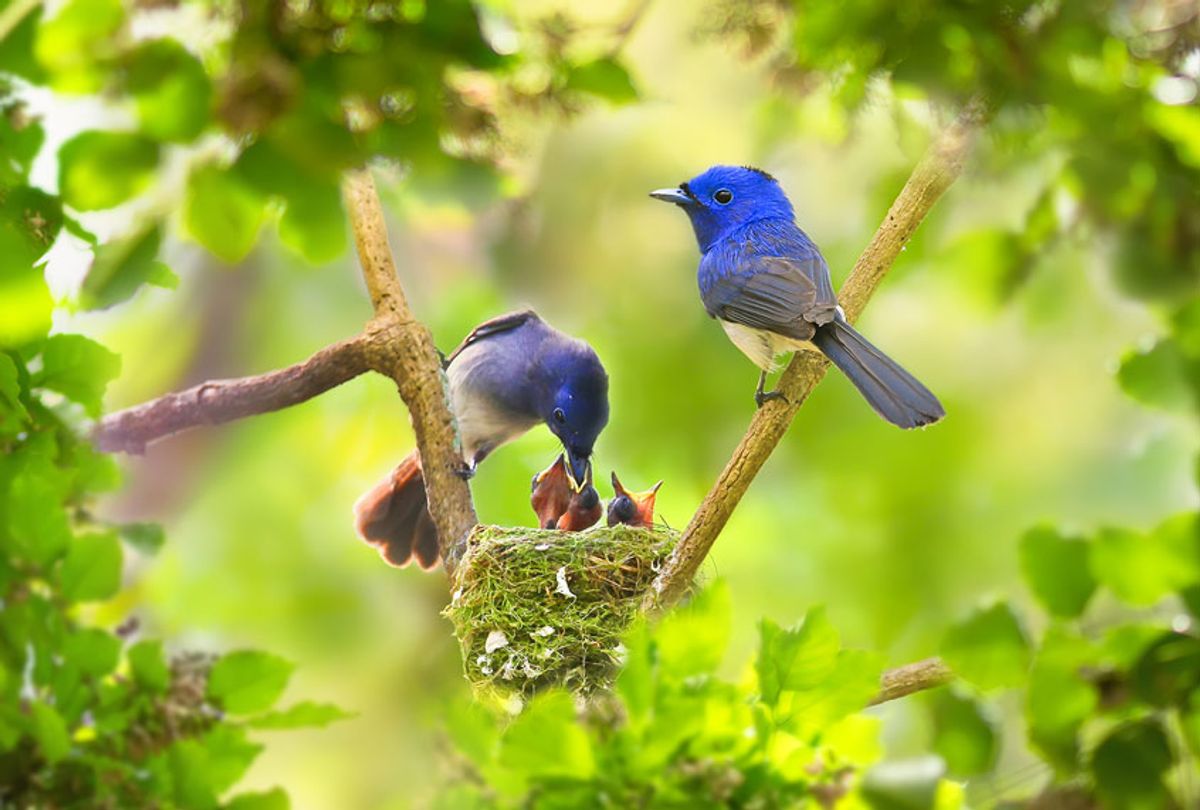 Birds in a backyard, feeding their babies (Getty Images)
--

Excerpted with permission from "Life After Deaf: My Misadventures in Hearing Loss and Recovery" by Noel Holston. Copyright November 5, 2019 by Skyhorse Publishing, Inc.

Our bedroom was chilly when I slid out of bed and stumbled into the bathroom to relieve myself. It was the beginning of my winter daybreak ritual: Get up. Relieve. Wash hands. Clomp downstairs. Turn up thermostat. Turn on coffee maker. Feed cats.

But as I stood over the toilet in the nightlight’s blue glow, I heard no splash. “Hmm,” I murmured to myself.

The hmm was inaudible, too. I stepped over to the sink and turned the handle. The water I saw rushing from the faucet was a silent stream. “Hmm,” I murmured again.

I surveyed my face in the medicine cabinet mirror. I watched my left hand as I reached up and rubbed my left ear. The sound it made was faint, distant, and dull as cotton. I rubbed my right ear with my right hand. Nothing. Nothing at all.

I shuffled back to bed and lay down next to my wife, eyes fixed on the ceiling. I woke Marty, not meaning to, with what I would have sworn was whispering. I was mouthing words — names, numbers, snippets of songs — hoping to find a tone, a pitch, that would register as sound. She told me later that her first sleepy thought when my mumbling woke her was that I had suffered a stroke.

“Honey, what’s wrong?” she asked. Her face loomed over me like a pale moon. I responded to her worried look, not her words.

She came around to my side of the bed and switched on the brass lamp on my nightstand. She motioned for me to sit up and then pushed a folded pillow behind me. Marty is medically knowledgeable. One of the many day jobs she’s worked in her life as a singer, songwriter, and musician is certified nurse’s attendant. She wanted to look me over and assess whether we needed to race to the nearest emergency room.

She plucked a tissue from the box on our bookcase headboard. “Blow your nose,” she said, miming the gesture.

I blew, careful not to push too hard, and then again, harder. She gave me a how-now look. I shook my head and shrugged my befuddlement.

She put her face up close to my left ear. I could faintly detect the word “sleep.” I lay back down on my side. She switched off the light and crawled back into bed with me.

Though she was spooned against my back, I was alone in my thoughts. I took stock. My left ear had faded over a period of half a dozen years, starting in the mid-1990s. I’d had a series of hearing aids. My good ear, the right, had been getting weaker, though gradually. I had composed a sort of prose poem a few days earlier. I extolled my ability to summon familiar music from memory. I had planned to perform it later in the week at Word of Mouth, a monthly poetry and spoken-word jam at a downtown bar in Athens, Georgia, where we live. It was a knack that I had presumed would come in handy in the event my hearing ever got really, really bad. But I had never expected a loss so sudden, so dramatic. I had been fending off a mild cold and was sniffling a bit, but surely that couldn’t be the instigation for what seemed close to a total collapse.

The night before, March 3, 2010, I had gone to bed able to hear all manner of everyday sounds and comprehend conversation easily with a little amplification. Yet here I was on the morning of March 4 so auditorily challenged I could only faintly detect the sound of my own voice in my head.

I lay there cuddled up to Marty trying to will myself unconscious, hoping I could indeed sleep it off. The prospect of a silent or near-silent existence didn’t scare me to death — I understood, intellectually at least, that there are millions of people who live and work and play without any hearing at all. I only felt a wave of sadness. I had never been good with quiet. I was raised in a household in which there was almost always a record player or a radio going, sometimes more than one. I had spent 60 years in a sonic marinade.

My thoughts floated to music, which I love as much if not more than conversation. In recent weeks, I had been driving around with a boom box in the front seat of my old Mazda because, for some reason, its tone worked better with my weakened ears than the in-dash stereo. I had been playing a CD that had been a promotional gimme for an Elvis Presley retrospective that his ex-wife, Priscilla, had produced for television. For many years I had critiqued TV programming for a living. Friends and newspaper colleagues never got tired of predicting that my brain was going to turn to mush or that I would go blind. Maybe they were onto something.

The CD included rare alternative recordings of a few Elvis hits and some oddball studio outtakes. The last music I had heard on March 3 was Elvis and some of his pals goofing on an old Chuck Berry song, “Too Much Monkey Business,” a madcap, tongue-twisting litany of hassles, hoops, indignities, and idiocies the hero has had to duckwalk his way around and through.

I have since come to think of it as musical prophecy, but I didn’t realize that morning just how apt it would be, a theme song for my adventures in hearing impairment, for the comedy of errors to come. Monkey business indeed.

As I learned to live with my hearing loss, I hit upon a new coping strategy: sensorial diversity. I was a big fan of Marvel comics when I was a teenager, and none of Stan Lee’s imperfect superheroes intrigued me more than Daredevil, a blind crime fighter who had developed his other senses, not to mention his reflexes, to prodigious heights to compensate for his inability to see. As I came to realize that I might never regain anything approaching full hearing and that what I did regain might well be erratic and spotty, I started thinking about Daredevil and his triumph of will.

I was a little old for gymnastics and martial arts training. I wasn’t even playing basketball anymore because of fallen arches. Still, I stepped up my exercise regimen at the Y, betting that with patience, consistency, and a lack of vanity when it came to deciding how much weight to lift, I could get myself back into shape for more adventurous hiking, perhaps even running. It would be good to feel the air rushing past my face and arms again.

The goal wasn’t to develop super senses, but to indulge those that were not impaired. If new music sounded like ugly sonic mush, I could indeed stop and smell the roses. And the coffee. And the baking bread. I could crush a few leaves of rosemary or basil between my thumb and forefinger and inhale the fragrance, an olfactory wake-up call. I could get high on the aroma of garlic and onions slowly sautéed in olive oil. I could breathe the scent of Marty’s hair in the night.

If I yearned for freewheeling conversation, I could treat myself to a premium chocolate bar, order the orgasmic escargot at Athens’s one-and-only French bistro, or eat a Vietnamese or Greek dish I had never tried before. I could detour off the Interstate and onto a Georgia back road that would lead me to a roadside stand selling heirloom peaches, exquisitely flavorful beneath their thick, old-fashioned fuzz. I could have a slab of vine-ripened tomato with sea salt and a dash of mayo. I could make my mom’s gumbo.

If I couldn’t make a phone call, I could feel the shock and thrill of a sudden dive into a cool swimming pool. Like the B-52s sang, I could “dance in the garden in torn sheets in the rain.” I could invest in Egyptian cotton sheets with a sinfully high thread count. I could start treating massage as a necessity, not a luxury. I could take a tip from my wife, an apparel hedonist, and buy some clothes strictly for the feel of them.

If I felt deprived of aural stimulation, I could use my two reasonably good eyes to see more than I had been seeing. Just as our brains learn to screen out sounds that aren’t necessary, so it is with our vision.

What’s the Bible verse? There is none so blind as he who will not see? It’s true. We can become so narrowly or tightly focused that the wider world becomes a blur. One of the reasons nature documentaries can be so compelling is that the filmmakers focus for us.

They share their observational powers. They direct our eyes. But we are capable of doing this for ourselves, albeit not exotically. Our own backyards are teeming with natural wonder if we stop, get still, and really, truly look. There are remarkably intricate mushrooms and lichens near my house that I barely noticed before I adopted the Daredevil approach. There are little green lizards that flash pink throat pouches and shiny, black-and-blue skinks that are too gorgeous for such an inelegant name. And now that I have trained my eye to pay more attention, I not only see vastly more birds—cardinals, flickers, cedar waxwings, purple buntings—flitting around the trees off my back deck, but hawks on power lines or in dead trees along the highway and egrets fishing in roadside ditches and ponds. How many years did I look right past them? Now they are the music I drive to.

Scrutinizing and savoring art is a sensory experience, and so, I now understand, is writing, which for so many years was for me a means to an end. But so, too, are a near infinite number of things we do, from building a birdhouse to bricking a patio, from planting bulbs and seeds to inhaling the fragrance of simmering spaghetti sauce. It’s all in how you approach these “routine” experiences. Expanding their variety and making them fresh and meaningful to yourself, that’s the way you do it, that’s how you cope.

On a spring night in 2010, Noel Holston, a journalist, songwriter, and storyteller, went to bed with reasonably intact hearing. By dawn, it was gone, thus beginning a long process of hearing-restoration that included misdiagnoses, an obstinate health-insurance bureaucracy, failed cochlear-implant surgery, and a second surgery that finally worked. He negotiated the gauntlet with a wry sense of humor and the aid of his supportive wife, Marty. "Life After Deaf" details his experience with warmth, understanding, and candor.