Despite how dangerous the blooms are, there's almost no way for cities to combat them. 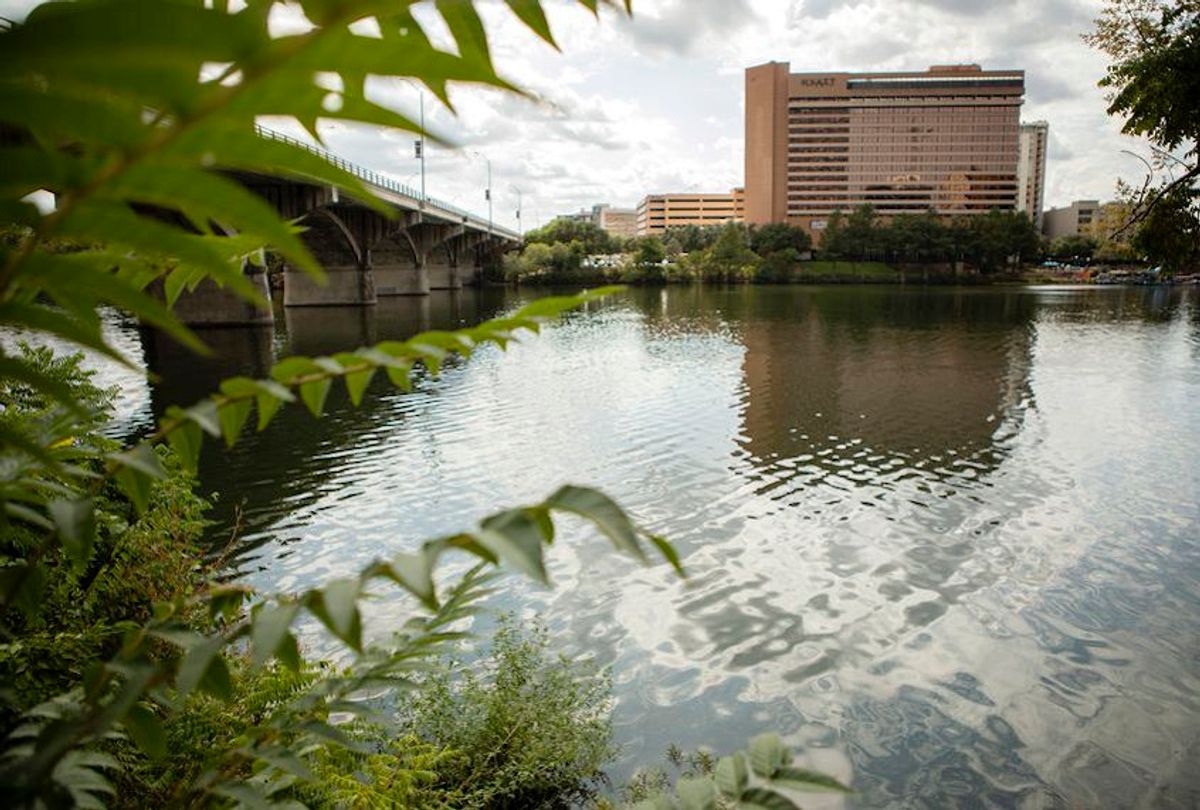 Lady Bird Lake at Congress Avenue in Austin. Since late July, parts of the lake have been off limits due to high concentrations of toxic "blue-green" algae. (Miguel Gutierrez Jr./The Texas Tribune)
--

Months have passed but the capital city still has signs up warning of ongoing dangerous conditions in Lady Bird Lake. This week, freezing temperatures killed off visible blooms, according to city officials, but they said the popular waterway still poses a threat.

Scientists say there’s still much they don’t understand about the recent emergence of the toxic algae blooms, but they’re already predicting that the problem is bound to get worse in the coming summers as climate change furthers once-unusual weather conditions. They said it’s also increasingly likely that more cities and towns with stagnant waters and hot summers could find themselves in the same situation as Austin.

So far, city officials don’t have a way to combat future algae blooms.

"We're really kind of in an infancy in this field," said molecular biosciences professor Schonna Manning, who studies algae blooms around the state at the University of Texas at Austin. "We know that there are algae blooms that are occurring all the time. But we don't really have a lot of experts out there that are able to identify either the organisms or the toxins."

Austin’s bloom this summer was one of the worst the state has ever faced, lasting for months and at a high enough concentration to ensure the water around Red Bud Isle, a dog park off the banks of Lady Bird Lake, stayed dangerous, Manning said.

A brutally hot summer with little rainfall created ripe conditions for the bloom. The algae that poisoned the water is often present in the dammed off portion of the Colorado River, but usually not in high enough concentrations to cause problems.

"This has been an abnormal summer with September's record heat going into October," said Brent Bellinger, a senior environmental scientist for the Austin Watershed Protection Department.

In the past, inland blooms in Texas usually only caused problems in small lakes and rural areas, not a highly-trafficked recreational waterway. If they did, like with Lake Texoma, located north of Dallas, the blooms only lasted a few days — maybe a few weeks at most.

Scientists say climate change — which is expected to cause hotter drought conditions in the future — will increase the frequency of inland blooms.

The continued use of fertilizers, which through run-off can spark blooms, will also contribute. One 2017 study also said that the southeastern parts of the U.S., including Texas, could lose millions of dollars if these blooms force authorities to cut off access to bodies of water used for recreation. The study also said most bodies of water in the U.S. can expect at least one week’s worth of harmful algae blooms per year, but that in the coming decades that average would triple to three weeks.

In the Great Lakes, one bloom of a similar blue-green algae to Austin’s shut down the water utility in an Ohio city in 2014. And just a few weeks after Austin’s bloom began, another bloom killed a woman’s three dogs in North Carolina.

There are also many factors about algae, from its concentration to how much is ingested, that can affect its deadliness, Bellinger said, making it hard to determine when it becomes a public health issue.

As a result, cities have found themselves ill-equipped to respond, especially because a bloom can appear in a matter of days, under the radar of officials.

"These things can spring up so fast, and we might just miss it. We don't want to take that risk," Bellinger said.

Some blue-green algae is completely harmless — the color has nothing to do with its toxicity. Testing can take several days at a minimum and requires equipment that most local municipalities don't have.

Austin had an existing contract with Manning to look into potential algae problems. Following the first report of a dog dying after swimming near Red Bud Isle, city officials took samples to Manning for — giving them information they could then disseminate to the public about the extreme danger of letting pets swim in the lake. The testing confirmed the bloom was not related to other harmful sources like toxic sewage or chemical spills.

But after identification, city officials lacked tools to fix the problem. Algicides could damage other parts of the environment or release the neurotoxins directly into the water, worsening the problem. Water protection agencies just have to wait until rain comes to break up the bloom or it dissipates on its own.

The only other option is to remove the algae manually, so unless "you want to get on your paddle board and pick your pool skimmer out there and have a grand time," people and pets need to stay out of the water while it's there, Manning said.

Dogs are especially susceptible to toxic algae because they drink while swimming and often ingest whatever else is in the water at the same time, Texas A&M veterinary toxicologist Murl Bailey said. Water, and whatever is in it, also sticks to their fur, leading to further exposure if they try to lick, or clean themselves after swimming. The algae is a lower risk to humans, as long as they don't ingest the water.

Bailey cautioned that even if the algae is not visible, its toxins could still be in the water.

“It could be a completely clear pool of water and algal toxins can still be there," Bailey said. "But normally we think that there's scum on the water."

Austin has not measured any toxins in the water outside of the algae itself, Bellinger said.

When it comes to algae in general, Evelyn Reategui-Zirena, a toxicologist for the Department of State Health Services, said people should generally avoid foamy water, seen commonly near some toxic blooms, or water that seems discolored.

And, "unless it is a free flowing stream, don’t take your dog there," Bailey said.

Claire Saccardi’s golden retriever, Harper, was one of the dogs that died from exposure to the algae over the summer in Austin. Months later, she says talking about what happened to Harper still hurts, but that now she tells as many people as she can about what happened, so no one else has to suffer the same loss.

“It's one of those things that 90% of the people I've talked to have never heard of it, and I had never heard of it,” Saccardi said. “I just want people to have an abundance of caution. It's just incredibly tragic and just a terrible way for your best friend to die.”

Texas A&M and the University of Texas have been financial supporters of The Texas Tribune, a nonprofit, nonpartisan news organization that is funded in part by donations from members, foundations and corporate sponsors. Financial supporters play no role in the Tribune's journalism. Find a complete list of them here.