Bill Barr's fascist manifesto: Is this man the real threat to American democracy? 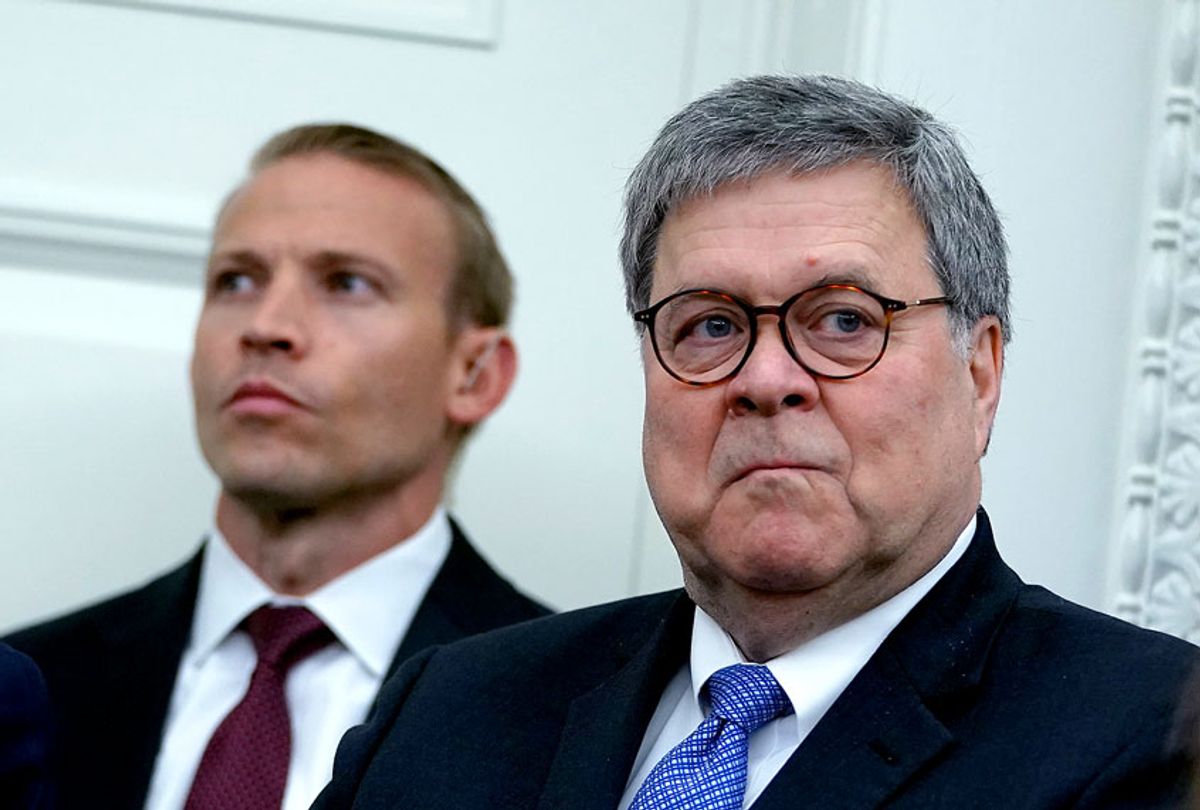 The biggest moment in former Ukraine ambassador Marie Yovanovitch's impeachment-hearing testimony on Friday was when House Intelligence Committee chair Adam Schiff, D-Calif., told her that President Trump was attacking her on Twitter as she was speaking.

Trump's defenders came out in force, offering various explanations for his mob-like behavior. Rep. Jim Jordan, R-Ohio, has been arguing that Trump was just testing the Ukrainians to see if they would fall into his trap and prove they were corrupt. Sen. Ron Johnson, R-Wis., using the abusive-husband excuse, insisted that it's Trump's political opponents who make him behave the way he does — they are "tormenting" him and should have just covered up his crimes for the good of the country. It's clear that the only thing they can settle on is the inane story that Trump prefers: He did absolutely nothing wrong and anyone who says otherwise is a partisan hack acting in bad faith.

Trump himself was defiant when asked about his Twitter assault on Yovanovitch, saying he has the right of free speech, and simply refusing to acknowledge that intimidating and threatening people is illegal. His views on all this are clear, and he's said it many times: "Article II means I have the right to do whatever I want."

We know that Trump has never read the Constitution. His lack of basic civics knowledge is legendary and he wouldn't sit still for a serious lecture on what it means. So where do you suppose he got this lie about Article II, which he bandies about as if it's some obscure text that nobody's ever heard of? (It's rather similar to the way he constantly claims that few people realize Abraham Lincoln was a Republican.)

The first time I can find that he mentioned it was back in August of 2018 when he was asked by a Bloomberg reporter whether he was going to fire then-Attorney General Jeff Sessions:

Look, I just would love to have him do a great job. And I'd love to have him look at the other side. And I have purposely — and there's no reason for me to do this — I could go and — you know, I mean — I'm allowed to do. You look at Article II, you look at whatever you want to look at, I'm allowed to be very much involved. This is just a witch hunt.

I don't know why he suddenly started evoking fake dictatorial powers found in Article II, but it is entirely possible that he got it from an unsolicited memo sent to the White House around that time by a retired lawyer and former Republican attorney general named Bill Barr. Needless to say, Trump didn't personally read that memo, but it's likely that its arguments were conveyed to him, including Barr's repeated assertion that Article II of the Constitution sets forth virtually unlimited executive power. Anyone observing Trump over the past few years would know how well he would respond to that.

So then Barr was nominated to be the attorney general and fudged his way through the confirmation hearings, obviously aware that he could hoodwink the media and the political establishment into believing that since he had been George H.W. Bush's AG he was an old-school Republican who would play it straight and go by the book. That memo and his associations came up but didn't specifically seem to alarm Senate Democrats, although there wouldn't have been a lot they could do about it even if it had. There were great hopes that this experienced, veteran, D.C. insider would take control of the Department of Justice and work to rein in this rogue president.

It turns out, of course, that Barr is more radical than anyone could have imagined. I've written about his adherence to the "unitary executive" theory quite a bit. But last Friday night he gave a speech to the Federalist Society that makes clear his pet constitutional theory is only a part of the problem. This is not just about presidential power. It is about a deep loathing for his political opposition on such a visceral level that it's frightening to think about such a man having so much power and being answerable only to the inept bully in the White House. It was frankly authoritarian.

Among other things, Barr said:

The fact of the matter is that, in waging a scorched earth, no-holds-barred war of resistance against this administration, it is the left that is engaged in the systematic shredding of norms and undermining the rule of law. This highlights a basic disadvantage that conservatives have had in contesting the political issues of the day.

Their holy mission is to use the coercive power of the state to remake man and society in their own image, according to an abstract ideal of perfection. Whatever means they use are therefore justified because, by definition, they are a virtuous people pursing a deific end. They are willing to use any means necessary to gain momentary advantage in achieving their end, regardless of collateral consequences and the systemic implications.

You would not be alone in shaking your head and wondering what alternate universe Barr is living in. After all, just hours before he delivered that speech the president's close confidant Roger Stone was convicted for crimes associated with dirty tricks, smears and character assassination in service of Donald Trump, following many years of similar service to the Republican Party.

Barr seeks to make the conservative movement see Trump's alleged victimization as a reflection of their own. They must see themselves as easy prey, hunted by the ruthless leftist "resistance," which seems to include all members of the legislative branch, "disloyal" federal employees and any member of the judiciary who may have ruled against Trump's policies.

The speech was frightening both in its arrogance and its lack of self-awareness. Right now, Barr is in the midst of an investigation into the "origins" of the Russia investigation during the 2016 campaign. He has strongly suggested he believes it was improper to investigate a Republican presidential campaign, and the fact that the DOJ and the intelligence community, which undertook that investigation, are themselves part of the executive branch he now venerates as a repository of unlimited power doesn't seem to have occurred to him.

Barr's speech has come under a lot of public criticism. But the members of the Federalist Society in attendance on Friday night gave his rousing call to arms a standing ovation. The supposedly brilliant legal minds of the conservative movement ecstatically applauded a demagogic, partisan speech by the most powerful law enforcement officer in the nation, setting forth the idea that America should be ruled by a succession of dictators who will keep the nation's true enemies — the political terrorists of the left — in line.

If we're lucky, Donald Trump will not be president much longer. But this is the Republican Party he will be leaving behind. Rather than being chagrined by this experience, they seem to be evolving into a new level of authoritarianism.