Extinction Rebellion to Pelosi: "Meet with us or leave us to starve while you jet to your Thanksgiving feast" 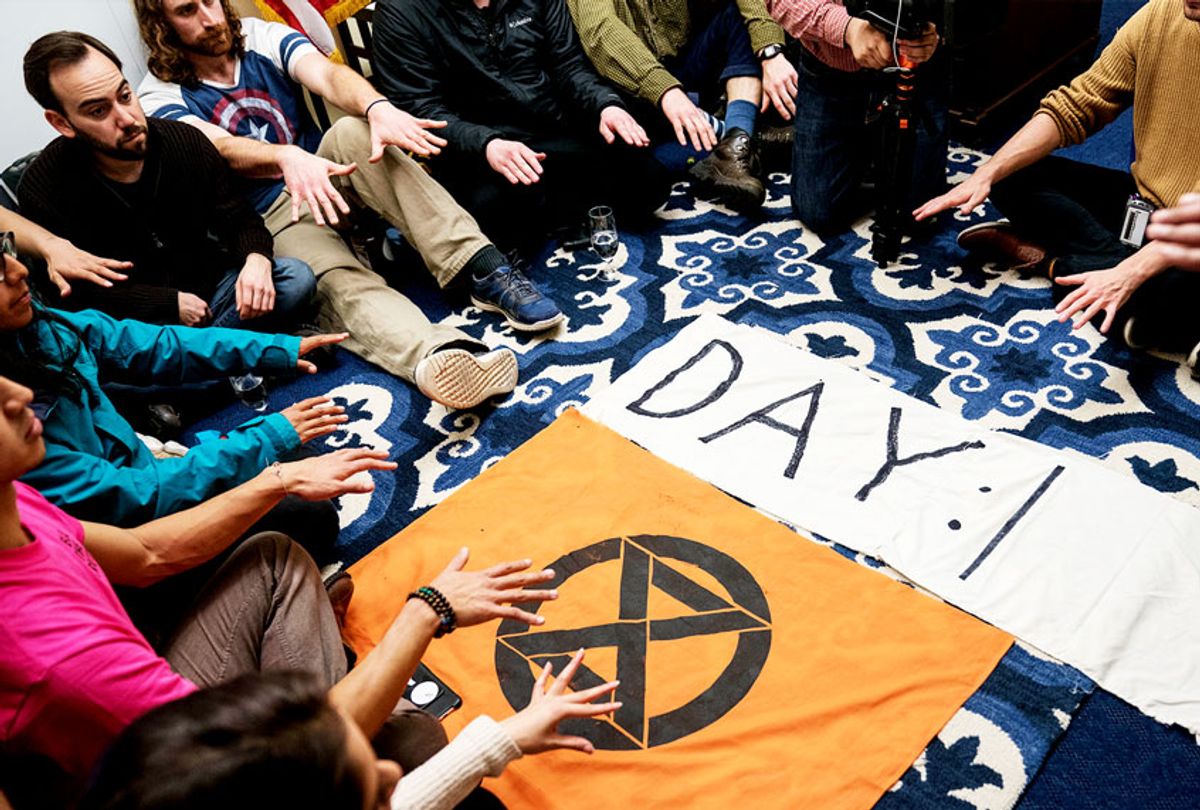 Extinction Rebellion protestors participate in a hunger strike and "grief session" in House Speaker Nancy Pelosi's Office in Longworth House Office Building on November 18, 2019 in Washington, DC. The strike is planned to be held all week or until Speaker Pelosi agrees to sit with the group for a one hour on-camera interview about climate change. (Sarah Silbiger/Getty Images)
--

The global grassroots movement Extinction Rebellion is targeting House Speaker Nancy Pelosi with a hunger strike and demanding that the Democratic leader embrace bold climate action as have progressive lawmakers around the country.

The group told Pelosi a week ago that members would begin a hunger strike Monday unless the California Democrat agreed to a one-hour, on-camera meeting to discuss Extinction Rebellion's demands for concrete climate action.

On Twitter, the group announced that Pelosi's time was up and that at least 20 young activists would occupy the speaker's Washington office until she meets with them.

Giovanni Tamacas, an organizer of the hunger strike, read from a letter sent to Pelosi as the action began Monday.

"We won't be patronized by a meeting with your staff, or a meeting in the distant future, or a five minute conversation, or an impromptu talk," the letter reads. "Meet with us or leave us to starve while you jet to your Thanksgiving feasts and cocktail parties in the glow of a burning world. It is with a heavy heart that we will deny ourselves our basic needs. May our pain finally sound the alarm."

The group rebuked Pelosi for "turning a blind eye" to the rapidly warming climate, wildfires raging throughout her home state, melting glaciers, and millions of climate refugees even as she says in speeches that "there is no time left to deny the reality of climate change."

Despite that rhetoric, Extinction Rebellion said, Pelosi has hamstrung attempts to push for wide-reaching climate legislation by creating a congressional committee that has no subpoena power or ability to draft bills. Pelosi herself has not joined more than 100 members of Congress in co-sponsoring Green New Deal legislation, which is supported by a majority of Americans, including 86 percent of Democratic voters, according to recent polling.

"Every day the evidence piles up at your desk, but you have yet to pass even symbolic legislation recognizing the climate crisis as a national emergency," Extinction Rebellion wrote. "With all due respect, you have failed."

Extinction Rebellion's demands — conveyed over the last several months at rallies where attendees have spent weeks occupying public spaces, at nurse-ins in London, and now with the hunger strike — are that government leaders "tell the truth" about the climate by declaring a climate emergency; commit to passing legislation that would reduce carbon emissions to net zero by 2025; and establish a citizens' assembly on climate justice to center the concerns of frontline communities.

"Humanity is at a crossroads. We either unite to prevent climate and ecological collapse, or this nation and global society will fall to pieces," wrote the group to Pelosi, echoing the warnings of Pentagon experts as well as 11,000 scientists around the world.

As the strike at Pelosi's office began Monday morning, organizers handed out vitamins and nutritional supplements to the campaigners.

In New York, four students also began a hunger strike at Columbia University, demanding to know why the university has not joined a number of colleges, cities and financial institutions in divesting from fossil fuels under pressure from activists.

More than 300 people worldwide are taking part in the hunger strike, according to Extinction Rebellion. In England, 10 strikers assembled outside the Conservative Party headquarters.

"Gratitude to all in Extinction Rebellion who are beginning their hunger strikes today," organizers tweeted. "Let's hope it communicates the desperate need to act now on ecocide and the climate emergency to Speaker Pelosi and other legislators before it really is too late."

"It's already too late for so many," the group added.