In "Ernie & Joe," cops help the suicidal or mentally ill without criminalizing them

In HBO's doc, the San Antonio Police Department intervene to keep people alive, from harming others & out of jail 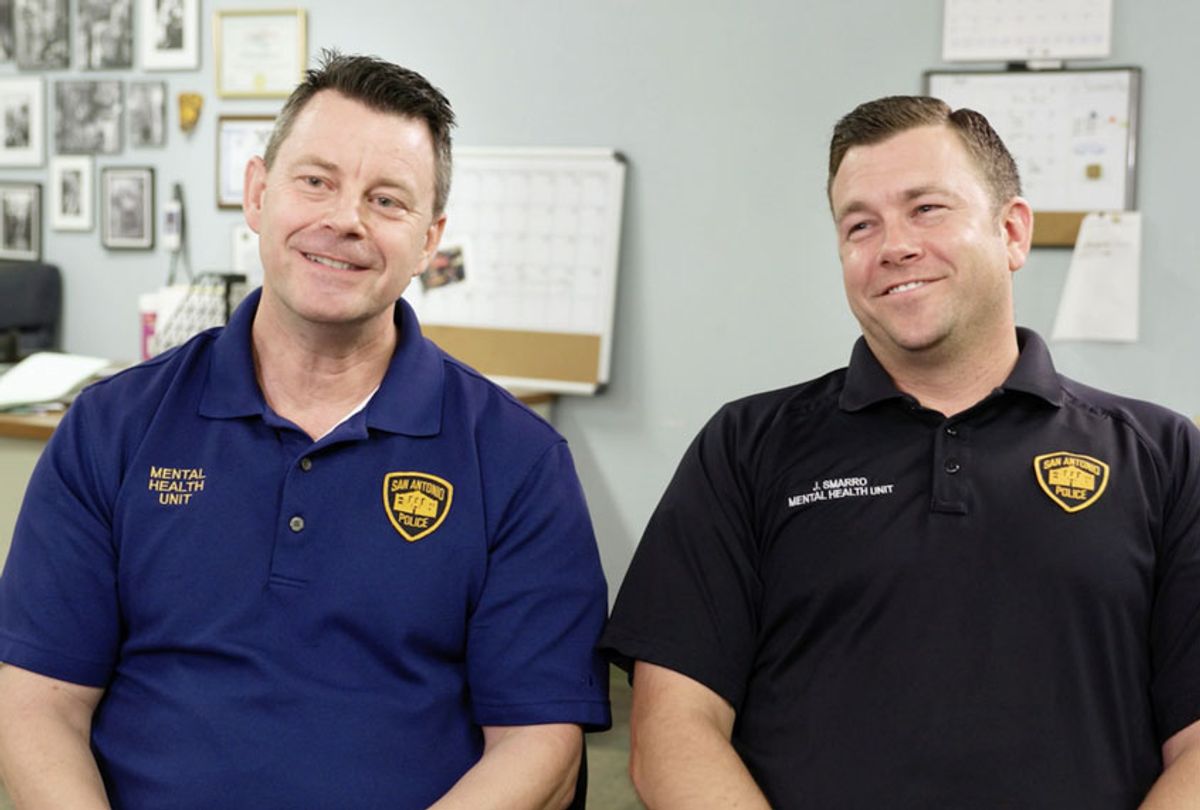 Jenifer McShane’s insightful, enlightening documentary, “Ernie & Joe: Crisis Cops,” premiering on HBO Nov. 19, allows viewers to ride along with the title San Antonio police officers. But this documentary is no feature-length episode of “Cops.” Rather, it shows how these valued employees of the SAPD’s mental health division help suicidal and dangerous citizens get the treatment the need without criminalizing them. What is more, Ernie and Joe both train fellow officers, cadets, and community members about their intervention practices — listening and explaining their fears — to resolve crises.

The impact of these tactics has been beneficial, and episodes in “Ernie & Joe” show the efficacy of their approach, especially dealing with suicidal individuals. While McShane shows that sometimes things do not work out — there is a powerful description of a jumper — the importance of this work cannot be denied. In fact, the film shows how the unit is expanding its outreach.

McShane and the film’s subjects, chatted with Salon about the documentary, and the SAPD’s efforts to deal with mental health issues in ways that engage compassion and empathy.

How did you learn about Ernie and Joe and their work?
McShane: I read an article that a mutual friend sent me about the innovative work happening in San Antonio about mental health and jail diversion, and the mental health unit on the SAPD was mentioned throughout the article as one of the pieces of the puzzle that was so important. My previous film was about five women in prison, and as I was making and researching that film, I saw a clear connection between mental health and who is behind bars. That resonated with me.

I went to visit without my camera to observe and get a better understanding of this work — what it was, and if it would make a film. I drove around with Ernie and Joe and I knew I wanted to focus on one set of partners. Out of the 10 in the unit, they were logical ones for many reasons.

How did you gain their trust and the access to make this documentary?
McShane: That first visit driving around without a camera was helpful. There were no distractions. I was able to watch, and listen, and chat with them. They got a sense of who I was, and I explained my thinking. I came back and filmed for a week and used that footage to get grants to finish the project. I got lucky with the subjects. They were open and willing to trust the process and what I was doing with the whole story. I went back many times and ultimately shot 300 hours of footage over two-and-a-half years

Joe: To reiterate, at the point she came to us, we’d been used to dealing with media and press and local news. We didn’t understand the full breadth of the project, so when Jenifer talked and met with us, even she didn’t know what the project would be. We started developing a relationship, and she was easy to trust. And, as a fellow New Yorker, we developed a close family bond.

How did you determine what episodes from the ride along to include in the film? There is a case study of Kendra, a suicidal woman, and concern for an anonymous man at a bar who has a gun, as well as others. What made a useful “story?”
McShane: My goal was to make the film feel as immersive as possible. As if you were on an hour-and-a-half ride along. I didn’t want to make it preachy — no talking heads or experts. We made those decisions in the editing room and collected the things that were most meaningful and that moved the story forward. Kendra was logical to follow because of dramatic nature of her story. It was like a Rubik’s Cube to lay out the story to keep viewers engaged and focus on Ernie and Joe’s story and mirror what they were doing in the community.

What I appreciated most about your film is showing how the officers calmly responded to crisis situations. You show a very shocking news clip in the opening moments where a disturbed man, holding a screwdriver is shot and killed by an officer. It emphasizes why Ernie and Joe’s approach — to listen, be calm, and control the situation — is so effective. Ernie and Joe, can you talk about this positive approach to your work?
Ernie: I think one of the ways we stay in the moment and not get caught up in crises is our past experience. I was on a DWI unit before this and I can’t get upset at a drunk because they are obnoxious. People with mental illness who are in crisis don’t have a choice. Knowing what you come in with and knowing the desire — to focus on the crisis and the person and let them know and understand that you are truly there to listen to them. If I am authoritative, I can’t build rapport and get them to do anything I’m suggesting. If I’m calm, in the moment, and understand and listen, the outcome 99 percent of the time will be positive.

Joe: That’s the hope. You have to be willing to peel back the layers and admit that maybe we haven’t been doing it right or well. It’s one of the dangers of falling into paramilitary infrastructure or believe that we need to militarize first responders in this country. It sends the wrong message. The film changes perspective for people who have rigid beliefs on law enforcement as a whole or people with mental health diagnoses. It provides hope that there is a better alternative.

Our chief said it’s not about being a softer police department but about being a smarter police department. There is a smarter way to do this — which is really what this is. I tell officers that there is often an alternative to using force. We can accept the fact that a good portion of use of force incidents in this country are because the officers are not willing to step back and deescalate, or that we are a contributing factor to the escalation.

I am very glad the SAPD is not criminalizing these individuals but treating them. Can you discuss how this process works?
Joe: Every officer in the SAPD has been through the 40-hour Crisis Intervention Training program. Officers are educated on treating people versus incarcerating them. It promotes the benefits of jail diversion. If they arrest someone, they have to ask four mental health questions. If they answer yes to any of them, a local mental health authority can help them. It’s more humane to treat people this way. It is also more cost effective to the public health bottom line.

What observations do you have about mental health issues having made this film?
McShane: I think it really made me value this idea of slowing the process down, taking more time, and being more honest. I didn’t go in thinking I wanted to criminalize mental illness, but I see how handling it changed the dynamic between law enforcement [officers] and who they are serving. Every call Ernie and Joe get, they introduce themselves by first name. They don’t wear uniforms. They say, “You’re not in trouble,” which can mend divisions in communities. What I learned was how many 911 calls have an emotional distress component — much more than I realized when I started making this film!

Both Ernie and Joe have interesting personal lives. What thoughts do you gentlemen have about decompressing from such important and often dangerous work?
Joe: I’m happy to report that I don’t do overtime anymore. I refuse extra work. It’s not about the adrenaline. It wasn’t until I was in the department for eight years that a therapist said this was the worst profession for me because of the repeated exposure to stress and trauma. For me, it’s about finding opportunity to connect. There is perspective shifting. I’m fortunate to be in a position to be called out to people to meet them in a crisis. Instead of being frustrated by it, I’m grateful. It’s super-personal because a lot of people who have seen the film connect to this part of the story, and share their testimonies, or that they have a mental illness.

Ernie: It’s good to do this work and have an outlet to do this. We decompress, but its fulfilling to go back into a community where they trust us and give back to them what they expect us to do.

The program Ernie and Joe are in has grown — more officers are being employed by the mental health division; there are efforts to change laws about gun access and custody for the mentally ill folks, and there is greater outreach in the community. Can you talk about the success of this work? Is it going to be implemented in other cities and states?
Joe: We’re still realizing what that potential is. It’s an unknown. There’s no doubt the film will touch people. In Dublin, Ireland they will show the film at police academies. It’s a conversation starter, but we love it to be show at American police academies and at the state and federal level so people can see what the possibility can be.