Stefanik's fall: Why did a congresswoman from an upstate New York purple district just set herself on fire? 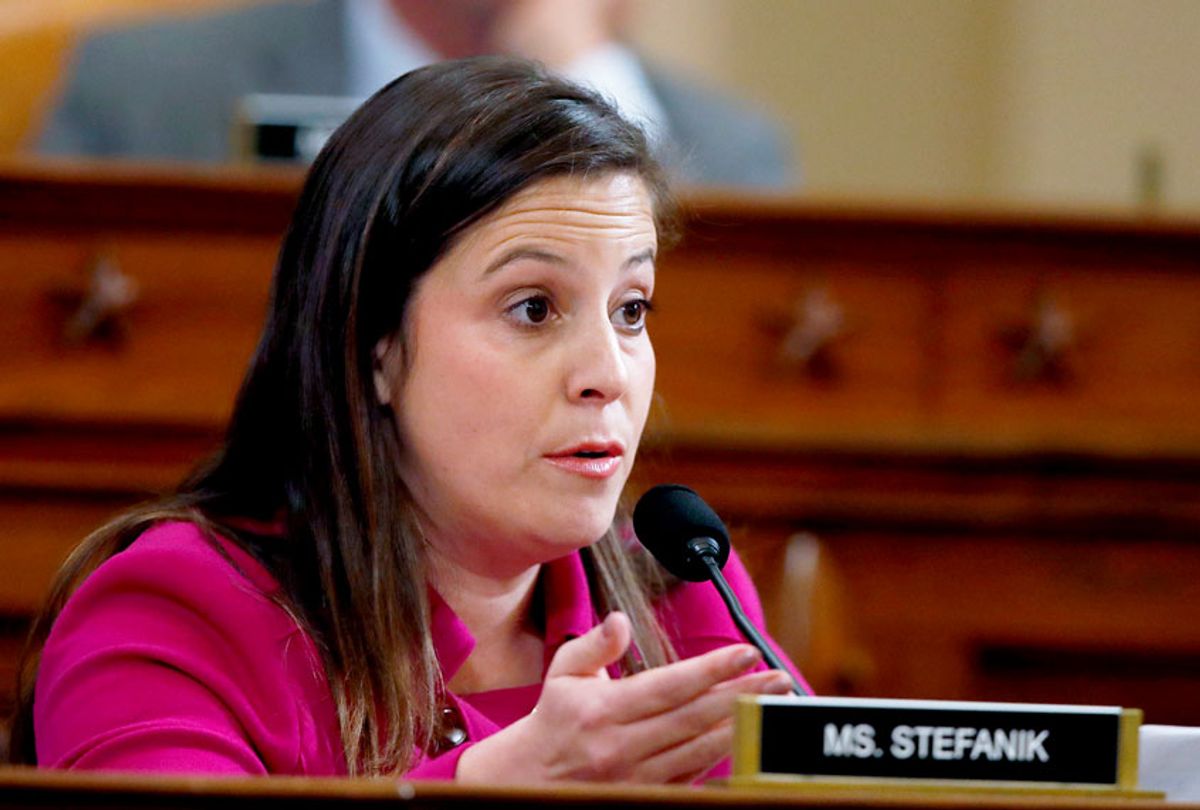 Since Democrats took control of the House of Representatives following sweeping midterm victories last year, Republicans have had little recourse to stop attempts at congressional oversight of the Trump administration. So, they’ve resorted to rotating a few willing members to dutifully gaslight, grandstand and exhibit fake outrage while hoping to create the illusion of fighting the good fight — all for Fox News hosts who hail them as the true heroes of the republic.

When public impeachment hearings began last Wednesday, House Republicans suddenly subbed in Jordan for fear of not having strong enough attack dogs on the House Intelligence Committee. They also apparently did not have enough women, which isn't that surprising — of 102 women in the House, only 13 are Republicans. When it came time to question Marie Yovanovitch, the former U.S. ambassador to Ukraine, Republicans relied on Stefanik, the only woman on the committee, to do their grilling. A third-term congresswoman from rural upstate New York who made history at age 30 in 2014 as the youngest woman ever elected to Congress — a record since surpassed by Rep. Alexandria Ocasio-Cortez — Stefanik emerged Friday as one of the leading Republican voices defending Trump.

She called for the original CIA whistleblower to be outed, repeatedly clashing with Committee chairman Adam Schiff, D-Calif., and pushed the thoroughly debunked right-wing conspiracy theory that Ukraine, not Russia, was behind election meddling in 2016.

Minutes after the hearing started, Stefanik said to Schiff: “We know clearly you're going to interrupt us throughout this hearing.”

“Since the chairman has gaveled out all of my colleagues with their unanimous consent,” complained Stefanik, “I am going to read for the record many of the chairman’s comments in September of the importance of hearing from the whistleblower.”

When the committee returned from intermission during its Friday impeachment hearing, Nunes tried to yield some of his time to Stefanik, in violation of long-established House rules. As she began to speak, Schiff promptly gaveled her off.

“What is the interruption for this time?” Stefanik shot back. Schiff reiterated that she wasn’t recognized.

It was an unbelievably transparent charade, of course. Republicans on the committee deliberately broke the rules so that they could appear on Fox News and complain about it later. They no doubt had the "muzzled" talking point prepared in advance.

What’s less obvious is why Stefanik willingly took on such a high-profile role during the impeachment hearings. Her district tilts only slightly Republican, and voted for Democrats in six previous presidential elections before swinging to Donald Trump in 2016. Stefanik's brand was built around a carefully cultivated image of moderation, and she’s now rebranded herself as a Trump loyalist and all-out obstructionist in the mold of Jordan and Rep. Matt Gaetz, R-Fla.

Conservative media immediately criticized Schiff for interrupting a woman and Republicans rushed to promote her. But Stefanik's likely 2020 Democratic opponent, Tedra Cobb, announced Sunday on Twitter that she raised $1 million in the days since Stefanik’s outburst.

Stefanik, for her part, has tweeted the link to her fundraising page eight times on her personal account since Friday. But with glorious infamy comes greater scrutiny, as she quickly found out after posing for a picture with Laura Loomer, an anti-Muslim conspiracy theorist and Republican congressional candidate in Florida.

Now Stefanik seems stuck. Either she continues to spearhead obstructionism and raises boatloads of cash for her opponent after every hearing, or she backs off. A newspaper that endorsed Stefanik in 2016 wrote last week that she “is sacrificing her integrity.”

“She is a loyal mouthpiece for Trump’s talking points,” wrote the editorial board of the Post-Star of Glens Falls, New York. “In a different time, she could have grown into a position of power and respect; instead, she is another Trump acolyte, tossing buzzwords to the mob and crying ‘fake news’ at every fact she wishes would go away.”

This looks like a no-win situation for Stefanik. She may become a MAGA fan favorite but she’s jeopardized her electoral advantage in a purple district by singlehandedly funding her previously unknown opponent’s campaign. She should take a lesson from the trajectory of former Rep. Claudia Tenney, another member from upstate New York who made a name for herself by claiming that many mass shooters turn out to be Democrats and that the deep state was responsible for ordering Ben Carson's $31,000 dining set. Tenney fell victim to the 2018 blue wave, losing narrowly to Democrat Anthony Brindisi in a district Trump carried by 15 points.

Stefanik would like to paint herself as an “independent-minded bipartisan” but she has now made clear that the entirety of the GOP has sold their souls to Trump. She must now run for re-election on a record of enabling a corrupt and unfit president even as he has failed to boost Republican candidates to victory in red states. Perhaps this is another benefit of the televised impeachment hearings. Republicans are shameless, and now they're setting themselves on fire.