Jordan and the GOP tried to raise doubts about Vindman's credibility and loyalty. The Army officer brought receipts 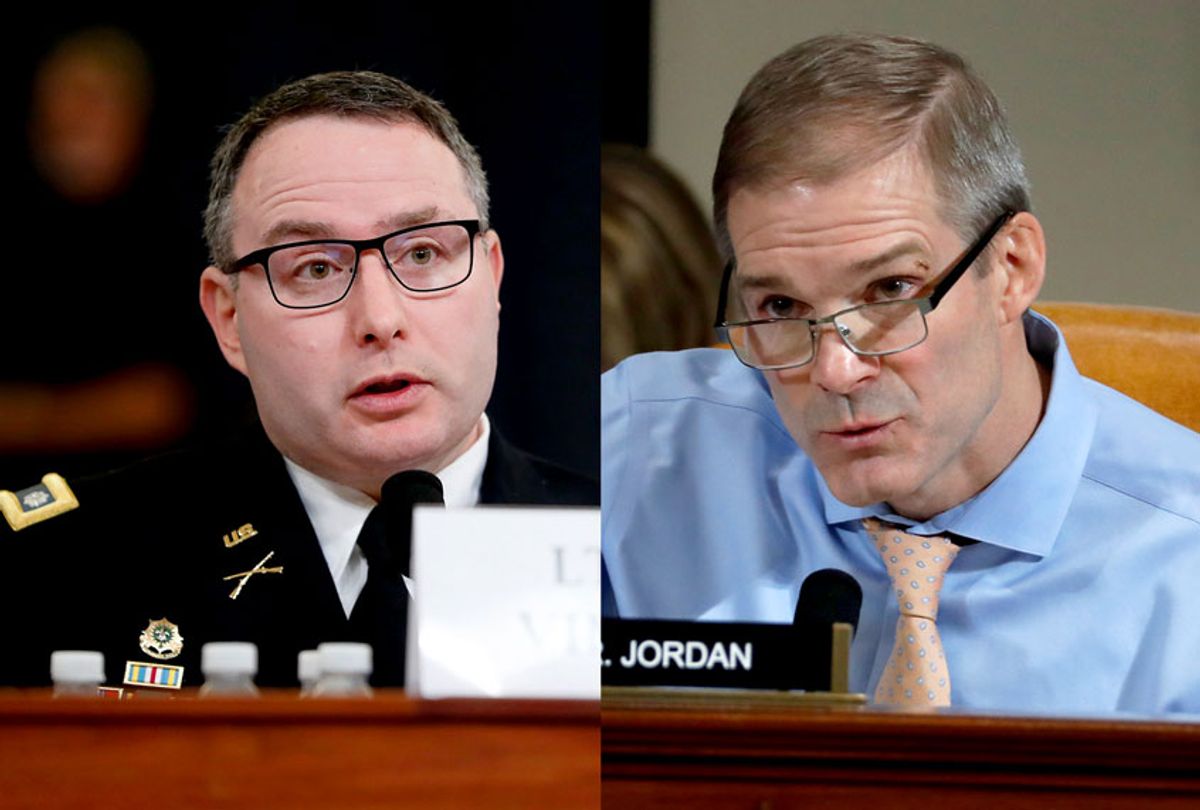 Vindman, the top Ukraine expert on the National Security Council and an Iraq war veteran who earned a Purple Heart after being wounded in combat, faced questions from the House Intelligence Committee in full uniform.

Rep. Jim Jordan, R-Ohio, who was transferred to the Intelligence Committee specifically for the impeachment hearings, attempted to discredit the witness during his questioning.

Jordan said that National Security Council official Tim Morrison had raised “concerns” about Vindman’s judgment during his testimony and claimed that former top NSC official Fiona Hill had similar concerns. Though President Donald Trump listened to Fox News' pleas to avoid tweeting during the hearing, the official White House Twitter account fired off a similar attack on Vindman during his testimony. (At least officially, Vindman still works at the White House.)

But the witness had receipts. Vindman pulled out a performance review from Hill to rebuke Jordan “in her own words.”

“Alex is a top 1 percent military officer and the best Army officer I have worked with in my 15 years of government service,” he quoted Hill as saying in the review. “He is brilliant, unflappable, and exercises excellent judgment.”

Jordan then claimed that there were concerns that Vindman had leaked information to the media, and asked if that was true.

“I never did, I never would,” Vindman replied. “That is preposterous that I would do that.”

Jordan also claimed that Vindman told others about Trump's July 25 phone call, which Vindman described as "inappropriate," before telling his superior officer, and further suggested that Vindman had violated legal instructions not to share information about the call with anyone. Vindman explained to Jordan that the congressman had confused the timeline of events.

Jordan, who had little to say in Trump’s defense aside from trying to undermine the witnesses, then tried to get Vindman to name the intelligence officer who filed the whistleblower complaint that triggered the impeachment inquiry.

“As I indicated before, this committee will not be used to out the whistleblower,” Schiff said.

At another point in the hearing, Republican counsel Steve Castor appeared to echo the dual-loyalty smears aimed at Vindman by Trump allies by repeatedly referring to testimony that former Ukrainian National Security Secretary Oleksandr Danyliuk had offered Vindman the job of Ukraine’s defense minister on multiple occasions.

Vindman explained to Castor that the invitations were “comical,” noting that he does not hold a very high rank in the United States. Nevertheless, he said, he turned down the offer and reported it to his superiors.

White House social media director Dan Scavino then tweeted a tiny segment of the exchange in which Vindman said he was offered the job, but cut out the actual explanation that Vindman gave.

“They’ve accused you of espionage and dual loyalties,” Hines said to Vindman. “The three minutes that were spent asking you about the offer made to make you the minister of defense, that may have come cloaked in a Brooks Brothers suit and in parliamentary language, but that was designed exclusively to give the right-wing media an opening to question your loyalties.”

He added, “It’s what you stoop to when the indefensibility of your case requires that you attack a man who is wearing a Springfield rifle on a field of blue above a Purple Heart.”

Vindman began the hearing by using part of his opening statement to hit out at the smears against him and other witnesses.

“I want to state that the vile character attacks on these distinguished and honorable public servants is reprehensible,” he said. “It is natural to disagree and engage in spirited debate — this has been our custom since the time of our Founding Fathers — but we are better than callow and cowardly attacks.”

Vindman, who reached out to the Army for help protecting his family amid threats stemming from his testimony, also gave a reassuring message to his family.

“Can you read the last paragraph for me again, the second-to-last one, can you read that again for me?” Rep. Sean Patrick Maloney, D-N.Y., asked Vindman. “I think the American public deserves to have it again.”

“Dad, my sitting here today in the U.S. Capitol, talking to our elected officials, is proof that you made the right decision 40 years ago to leave the Soviet Union and come here to the United States of America in search of a better life for our family,” Vindman said. “Do not worry, I’ll be fine for telling the truth.”

Maloney asked Vindman why he felt confident enough to reassure his dad.