Does mac and cheese belong in a holiday meal? Yes — and here's my go-to recipe 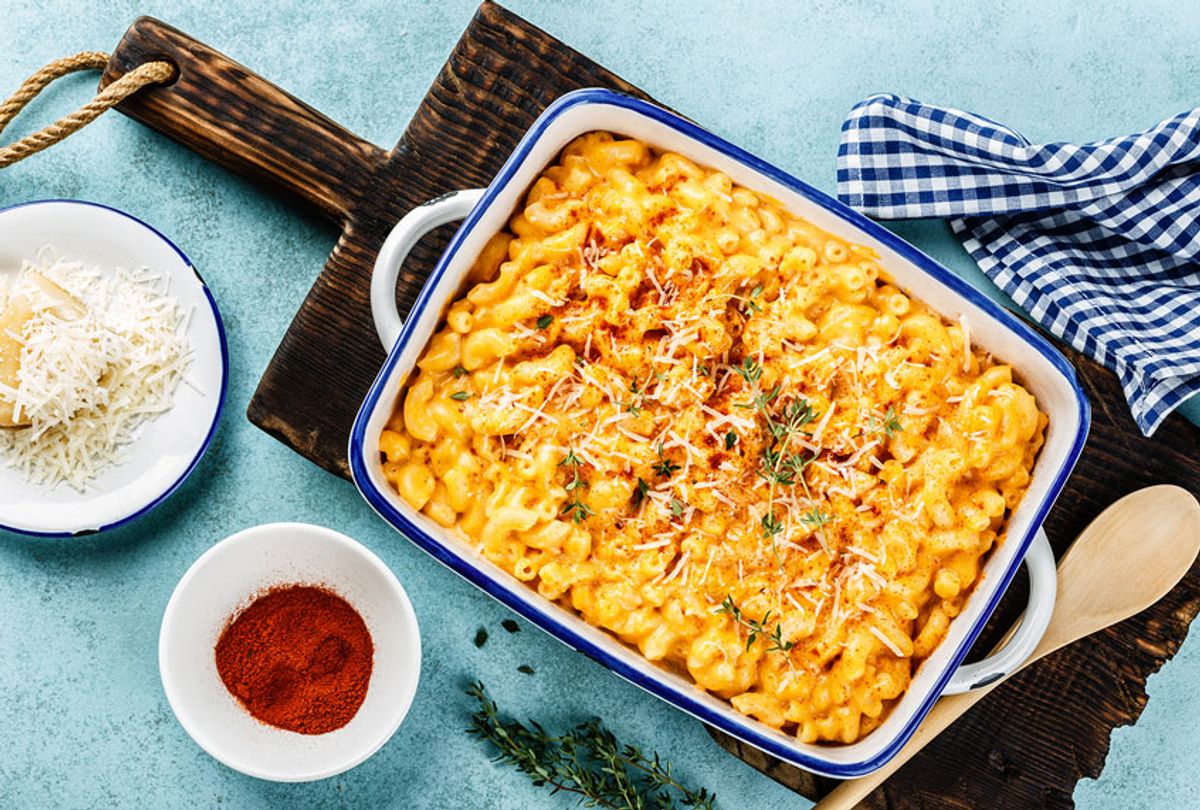 It's hard to say which of my then-boyfriend's highly emotional reactions struck me first and hardest, based on my memory of a moment that happened a long time ago. Was it the profound bemusement clouding his face or the barely veiled disdain in his voice after I told him macaroni and cheese would co-star on our Thanksgiving Day menu? Not only co-star, but receive high billing?

"Macaroni . . . and . . . cheese," he haltingly repeated, after I listed the object of his bewilderment among indisputable side-dish classics: stuffing, cranberry sauce, a vegetable of some variety, mashed potatoes. He paused before adding, "Okaaaaay."

It was our first holiday meal together, an "Orphan's Thanksgiving" we hosted during college for all of our friends who either could not afford to go home for the holiday or, like me, preferred not to.

My family lived close enough to the university that I could get to home using the city bus. But that time, the first of many, I chose to forgo the traditional sharing of turkey and toxic dysfunction for the promise of a tension-free Thanksgiving dinner based on a menu I designed. Macaroni and cheese was a non-negotiable holiday feature.

To me macaroni and cheese, prepared properly and with love, is more than everyday comfort food. On holidays like Thanksgiving and Christmas (and Easter, and the Fourth of July, and Arbor Day, and…) it holds its place as the side of all sides, a balance of perfect smoothness and a bit of welcome crunch from the breadcrumb crust. It's usually the first to go among the leftovers.

But to my then-boyfriend, who is now my husband, macaroni and cheese had a very different association in his mind. To him, macaroni and cheese was a Kraft processed product, the meal of last resort. It also happened to be his father's go-to nutritional plan on the nights that his mother, a nurse, worked the second shift at the hospital.

His mother hated to cook, you see, but his dad simply couldn't. Worse, this is a man who was fond of eating liverwurst, peanut butter and mayonnaise sandwiches. This is not hearsay. I watched him construct one of these crimes against cuisine and eat it. My late father-in-law had a special kind of palate, is what I'm saying.

So on those nights when mom was working, my husband recalled cringing as he watched his very-over-it father open a kitchen cupboard and reach toward its highest shelf.  He knew what dear old dad was retrieving, and these are his words, "that telltale blue box of doing the f**king minimum."

To me, macaroni and cheese is associated with memories of warm satisfaction and holiday comfort. But all he could think about at my mention of it, he told me, was visions of fake golden gloop in a small pot. On special nights, he remembers, his dad brought forth a package of hot dogs; he still describes in vivid detail their glistening salt-and-preservative sweat as father slid one or two slightly greyish-pink tubes free from its packaging, sliced them up and added them, unheated, into the unnaturally bright yellow stew.

This was the final step before ladling a bit into three CorningWare bowls: one for him, one for his son and one for his daughter, before huddling over the convenient meal and watching "WKRP in Cincinnati" together.

This constitutes a nice memory, frankly, to anyone whose father never cooked for them or bothered to do much of anything with his kids at all. Then again, my mother never attempted to feed me, as my mate puts, bowls of "yellow ooze with pink misery circles in it." At least we got mac bathing in actual melted cheese.

In reading these words, you may have surmised that there are a few differences between  my husband's upbringing and my own. And it is true, we were raised in culturally and economically unalike circumstances. The roots of his grudging acceptance of what I and millions of others consider to be one of cuisine's most divine unions of dairy and pasta is highly regional in its basis. His family is solidly small-town Midwestern stock, whereas my mother's people migrated to Chicago from the South at the beginning of the 20th century.

But our different somatic reactions to the very mention of macaroni and cheese – a dreamy smile for me, a green-tinged wince for him – is not necessarily another demonstration of "white people do things one way, black people do it differently." I don't even think it is expressly evidence of class difference, although there are historic reasons that his suburban Illinois white family may have made Kraft's macaroni and cheese a pantry staple, whereas my middle-class black mother, dedicated to making everything from scratch, never did.

Instead, it demonstrates how macaroni and cheese is one of those all-American dishes whose origins, and specialness, are a matter of some debate. It's not even purely American. There are pasta and cheese recipes dating back hundreds of years showing up in culinary manuals throughout Europe, the earliest listed in a 13th century Italian text titled "Liber de Coquina," which translates to "Book of Cooking." The Swiss have a dish known as Älplermagronen,the Alpine version of our beloved cheesy mac.

American legend credits Thomas Jefferson for popularizing the dish, even though evidence abounds that versions were served in upper class colonial households before Jefferson brought a pasta maker back from a trip to Italy and dished it up at White House dinners.

Naturally Jefferson's relatives or family members of wealthy colonials weren't preparing these dishes. That job fell to the servants — enslaved people, in Jefferson's case. As with all other soul food, this explains why homemade macaroni and cheese, made with fresh ingredients, is associated with special occasions in black households and the South, generally speaking.

The richness of its ingredients, king among them being a combination of good quality cheese and milkfat to ensure the creaminess of sauce, may prevent it from being an everyday meal for most people. Holidays, however, are a different matter.

And like potato salad, this is a dish with many ways to prepare it. Stovetop or baked? How many cheeses, and what types? Some recipes also contain secret ingredients only entrusted to certain preparers with proven skills. I've seen everything from nutmeg to mustard to egg listed as optional recommended additions.

Then and now, my man didn't have a problem with the cook. He took issue with the dish's presence at Thanksgiving at all. And if you understand the origins of Kraft macaroni and cheese, the version he grew up with, this is somewhat understandable.

Kraft introduced the product in 1937 as an inexpensive alternative to starvation. The Great Depression still had America in its grip, and the company presented its boxed pasta and powdered cheese as a means of feeding a family at the cost of pennies per serving — far less than the cost of fresh meat and dairy, which were in particularly short supply during World War II. For the same reason, Kraft macaroni and cheese also became a popular food among U.S. troops.

As an inexpensive, simple to prepare and relatively tasty source of protein and carbohydrates, Kraft's mac and cheese is hard to beat. That's why friends who grew up in households struggling to make ends meet report processed powder-based mac and cheese being a regular sight at dinnertime. So viewed from that frame of reference, it's easy to see why any version of macaroni and cheese showing up as part of holiday feast might give some of them pause. To some, it's inextricably associated with deprivation and hardship.

Not my mate, to be clear. To him it's just disgusting.

Eventually my spouse-to-be came around to macaroni and cheese's merits as a special dish. At that first Thanksgiving together he grudgingly added a modest scoop of my from-scratch preparation to his plate and ended up finishing every morsel. Nevertheless, it took years and many holidays for him to stop questioning its special occasion-worthiness. His protests became something of an annual tradition, our own little joke.

In his defense, it's not just him. A few years after we got married he teased me about it in front of one of my best friends who happens to be Canadian. She was confused at what the problem was, so I gave her a brief primer on our real macaroni and cheese versus the boxed version argument.

"Macaroni and cheese?" she replied, her even tone evincing neither excitement nor dismay. "Oh. You mean Kraft Dinner."

Apparently this debate knows no borders.

I've made many versions of mac and cheese over the years. As a kid I followed a very basic Betty Crocker recipe involving cubing slices of American processed cheese food, stacked after unwrapping them from their cellophane.  As a 20-something aspiring to impress I experimented with blending multiple cheeses, some very fancy. Honestly, you don't need all that. One good cheddar is fine.

Point being, as is true of most traditional holiday dishes, there are many ways to make macaroni and cheese. Follow a few basic rules, and it's tough to go wrong.

Like I said, everyone has their favorite. But for 101 versions that are easy to play around with, my votes are for the Southern Living Classic Baked Macaroni and Cheese recipe and Martha Stewart's Easy-to-Make version.

Martha Stewart's Easy-To-Make Macaroni and Cheese (as listed on MarthaStewart.com)

1/4 teaspoon cayenne pepper, or to taste

Heat oven to 375 degrees. Butter a 3-quart casserole dish; set aside. Place bread in a medium bowl. In a small saucepan over medium heat, melt 2 tablespoons butter. Pour butter into bowl with bread, and toss. Set breadcrumbs aside.

Fill a large saucepan with water; bring to a boil. Add macaroni; cook 2 to 3 minutes less than manufacturer's directions, until the outside of pasta is cooked and the inside is underdone. (Different brands of macaroni cook at different rates; be sure to read the instructions.) Transfer macaroni to a colander, rinse under cold running water, and drain well. Stir macaroni into the reserved cheese sauce.