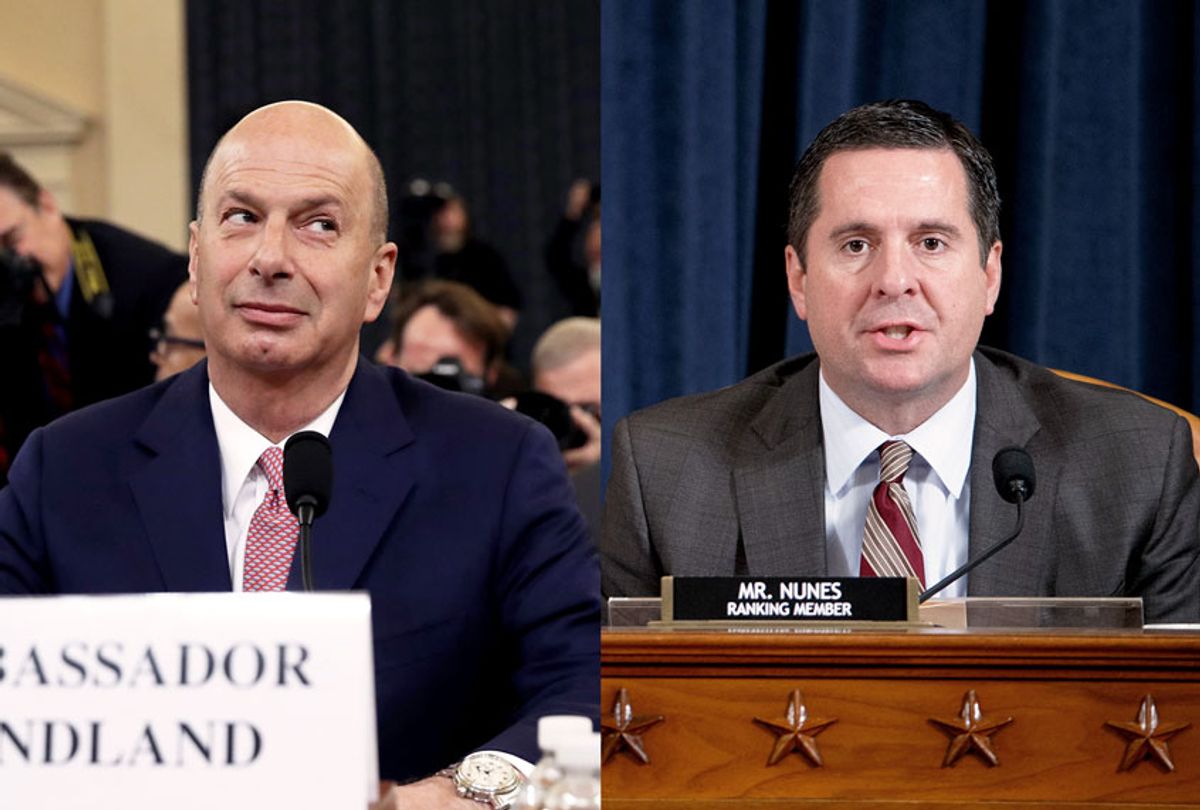 Sondland, who already revised his closed-door testimony to the House Intelligence Committee to acknowledge a quid pro quo, reiterated that there was one at Wednesday’s public hearing in the impeachment inquiry. Sondland claimed in his opening statement that he directly communicated the quid pro quo to Ukrainian President Volodymyr Zelensky and kept acting White House chief of staff Mick Mulvaney, Secretary of State Mike Pompeo and Energy Secretary Rick Perry in the loop on his efforts to get Zelensky to commit to an “investigation” into the Bidens. Sondland also acknowledged that military aid was withheld at Trump’s direction to pressure Ukraine into launching the probe.

“We all understood that these pre-requisites for the White House call and White House meeting reflected President Trump’s desires and requirements,” he said. “Mr. Giuliani’s requests were a quid pro quo for arranging a White House visit for President Zelensky. Mr. Giuliani demanded that Ukraine make a public statement announcing investigations of the 2016 election/DNC server and Burisma.”

Nunes began by comparing the Democrats’ impeachment push to former special counsel Bob Mueller’s probe, listing off numerous charges that although he dismissed at false were actually proven true.

“Trump had a diabolical plan to build a Trump Tower in Moscow,” he said. (True.) “Trump changed the Republican National Committee platform to hurt Ukraine and benefit Russia,” he added. (True.) “Trump's son-in-law lied about his Russian contacts while obtaining his security clearance,” he continued. (True.)

Nunes then went on to claim that Democrats were again pushing false charges in the Ukraine case.

“When the Democrats can't get any traction for their allegations of a quid pro quo, they move the goalposts and accuse the president of extortion, then bribery, and as a last resort, obstructing justice,” Nunes said, moments before Sondland explicitly described a “quid pro quo.”

“In closing, the Democrats fake outrage that President Trump used his own channel to communicate with Ukraine,” Nunes continued. “I'll remind them that our first president, George Washington, directed his own diplomatic channels to secure a treaty with Great Britain. If my Democratic colleagues were around in 1794, they'd want to impeach him, too.”

Moments later, Sondland blew up the entire narrative of the top Republican  on the panel.

“Secretary Perry, Ambassador Volker and I worked with Mr. Rudy Giuliani on Ukraine matters at the express direction of the President of the United States,” Sondland said. “We did not want to work with Mr. Giuliani . . . We all understood that if we refused to work with Mr. Giuliani, we would lose an important opportunity to cement relations between the United States and Ukraine. So we followed the president’s orders.”

“As I previously testified, if I had known of all of Mr. Giuliani’s dealings or of his associations with individuals now under criminal indictment, I would not have acquiesced to his participation,” Sondland added. “I know that members of this committee have frequently framed these complicated issues in the form of a simple question: Was there a ‘quid pro quo?’ As I testified previously, with regard to the requested White House call and White House meeting, the answer is ‘yes.’”

At one point in his statement, Nunes warned Sondland that he was about to be “smeared,” apparently referring to Democrats. After Sondland’s opening statement, many suggested that Nunes' prediction was misdirected.

“It’s like Nunes hasn’t read Sondland testimony,” wrote former Sen. Claire McCaskill, D-Mo. “He should have said ‘Amb Sondland you will be smeared . . . by the Republicans on this committee and the [White House].’”

“Yeah, the reaction I’m getting from everybody on the Hill right now, replied Playboy Washington correspondent Alex Thomas, “is ‘Nunes read the wrong opening statement.’”