Water, water, everywhere — as a vapor — on Jupiter's fourth-largest moon. But is there a (liquid) drop to drink? 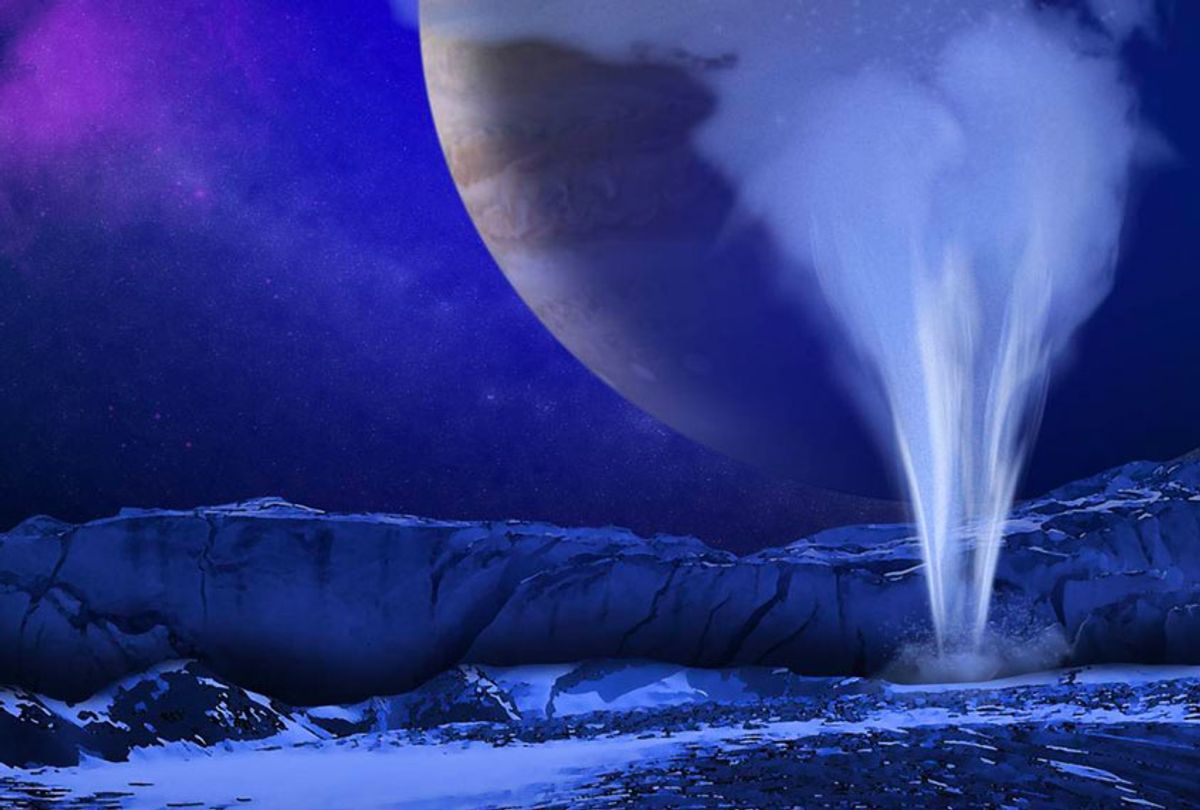 This is an artist's concept of a plume of water vapor thought to be ejected off the frigid, icy surface of the Jovian moon Europa, located about 500 million miles (800 million kilometers) from the sun. Spectroscopic measurements from NASA's Hubble Space Telescope led scientists to calculate that the plume rises to an altitude of 125 miles (201 kilometers) and then it probably rains frost back onto the moon's surface. Previous findings already pointed to a subsurface ocean under Europa's icy crust. (NASA/ESA/K. Retherford/SWRI)
--

It turns out Titan isn’t the only moon in our solar system that has the key ingredients for life. Jupiter’s fourth-largest moon, Europa, has emerged as a contender, based on new research. Europa is one of Jupiter’s 79 moons.

On Monday, a study published in Nature Astronomy revealed that an international team of astronomers detected water vapor in Europa’s atmosphere for the first time. In 2013, NASA's Hubble Space Telescope first detected water vapor on Europa, which could have been erupting from geysers, but nobody had directly measured it — until now.

“Here we present direct searches for water vapour on Europa spanning dates from February 2016 to May 2017 with the Keck Observatory,” the authors of the study state. “We suggest that the outgassing of water vapour on Europa occurs at lower levels than previously estimated, with only rare localized events of stronger activity.”

Over the course of 17 nights, a team of scientists used one of the world’s largest telescopes, the Keck Observatory in Hawaii, to study Europa and dig deeper into theories about liquid on the moon. The researchers only detected water vapor once during their two and a half weeks of observation, but there was a lot of it.

“This first direct identification of water vapor on Europa is a critical confirmation of our original detections of atomic species, and it highlights the apparent sparsity of large plumes on this icy world” Lorenz Roth, an astronomer and physicist from KTH Royal Institute of Technology in Stockholm, and co-author of the study, said in a media statement.

In one day's observation made in April 2016, Keck detected 2,095 metric tons of water vapor — with an uncertainty of 658 metric tons — at the side of Europa facing Earth. Despite the large amount of water vapor, scientists aren’t entirely convinced the vapor is coming from a subsurface ocean.

“This doesn’t necessarily mean the water vapor is coming from an ocean,” NASA planetary scientist Lucas Paganini told Wired. “But it does seem like this detection is connected to liquid water under the surface.”

Water is considered one of the three key requirements for life as we know it on Earth, meaning that the identification of water vapor helps qualify Europa as a possible place for life.

“Essential chemical elements (carbon, hydrogen, oxygen, nitrogen, phosphorus, and sulfur) and sources of energy, two of three requirements for life, are found all over the solar system. But the third — liquid water — is somewhat hard to find beyond Earth,” Paganini said in a media statement. “While scientists have not yet detected liquid water directly, we’ve found the next best thing: water in vapor form.”

Scientists will have to wait to get closer to Europa to learn more, but a mission is planned to hopefully find answers about the possibly habitable world. The forthcoming Europa Clipper mission is expected to launch as soon as 2023, according to an announcement in August 2019. The mission will explore whether or not the icy moon has life, or has conditions for life.

"We are all excited about the decision that moves the Europa Clipper mission one key step closer to unlocking the mysteries of this ocean world," Thomas Zurbuchen, associate administrator for the Science Mission Directorate at NASA, said in August. "We are building upon the scientific insights received from the flagship Galileo and Cassini spacecraft and working to advance our understanding of our cosmic origin, and even life elsewhere."