Mike Pompeo, secretary of nothing: Unlike Bill Taylor, he's a disgrace to West Point

Pompeo was first in his class at West Point. Now he's first in line to kiss Donald Trump's ass. Quite a career path 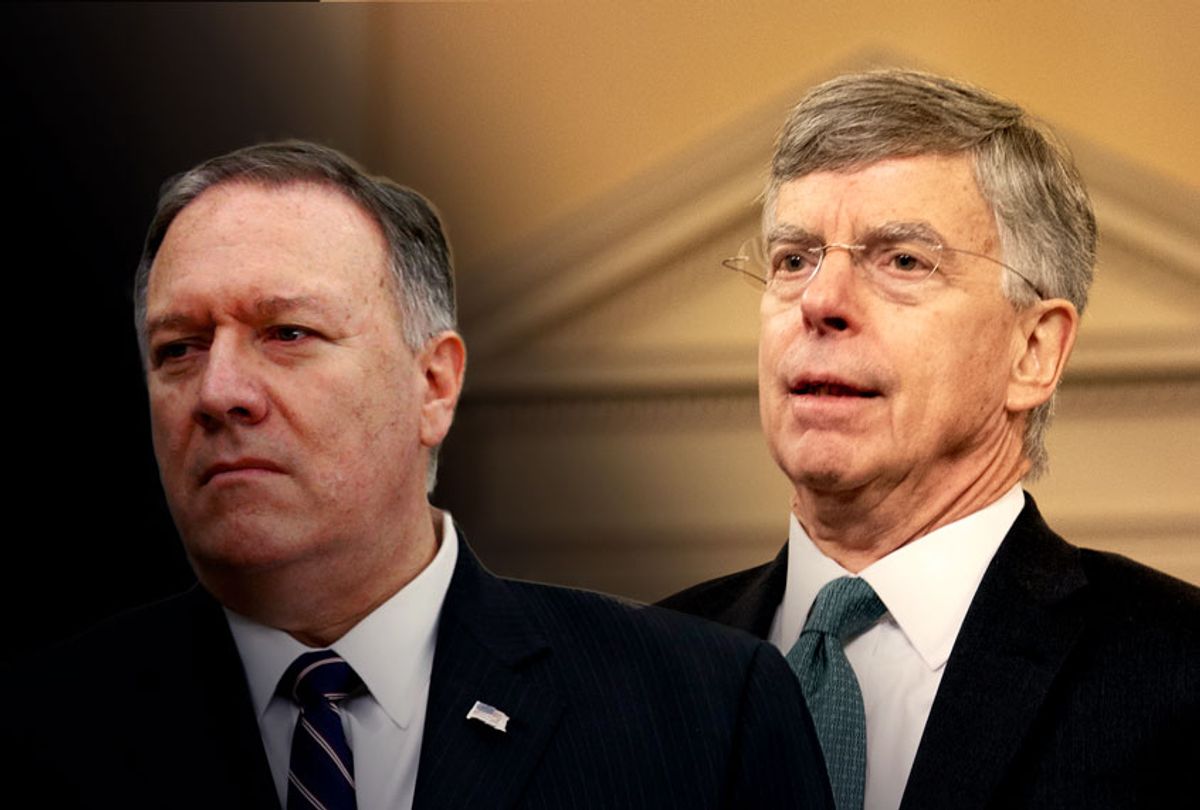 What a week for Mike, huh? He went to bed in Brussels on Tuesday night and woke up lodged under the bus after Gordon Sondland, U.S. ambassador to the EU, threw him under on Wednesday. Then he had to lie there as Fiona Hill drove over him again on Thursday.

“Everyone was in the loop,” Sondland testified at the House impeachment hearing. “It was no secret.” The “it” Sondland referred to was, of course, linking military aid for Ukraine with an investigation of Joe Biden and his son Hunter, and some sort of “investigation” by the government of Ukraine into the spurious right-wing conspiracy that it was Ukraine, not Russia, which had interfered in the 2016 election. Sondland testified that he repeatedly reported to Pompeo, as well as Vice President Mike Pence, about seeking the Ukraine deal.

But it was Fiona Hill, the former National Security Council adviser on European and Russian affairs, who provided the final link between the Ukraine scheme and Pompeo. Hill testified that Sondland, whom Trump had put in charge of his Ukraine policy, was “involved in a domestic political errand” when he was running around Ukraine trying to get them to investigate the Bidens. Hill testified, “[Sondland] said to me, ‘But I’m briefing the president. I’m briefing chief of staff Mulvaney. I’m briefing Secretary Pompeo. And I’ve talked to Ambassador Bolton. Who else do I have to deal with?’”

Seated next to Hill at Thursday’s hearing was David Holmes, a counselor at the U.S. embassy in Ukraine, who testified that he heard President Trump on the phone with Gordon Sondland talking about “investigations” in Ukraine.

Last week, Bill Taylor, currently serving as chargé d’affaires at the U.S. embassy in Ukraine, testified at length about his knowledge of the machinations by Sondland and Kurt Volker, the former U.S. special representative for Ukraine. Testifying with Taylor was George Kent, the deputy assistant secretary of state for European and Eurasian affairs. Kent denounced the smear campaign against former Ukraine ambassador Marie Yovanovitch, and said that withholding military aid from Ukraine in return for a domestic political favor was “wrong.” Also last week, former ambassador Yovanovitch herself testified about being fired after the campaign against her led by Trump’s personal attorney, Rudy Giuliani. Kurt Volker testified on Tuesday of this week. On Wednesday, Deputy Secretary of State for Political Affairs David Hale, the No. 3 official at the Department of State, testified that an official of the Office of Management and Budget had told him that aid to Ukraine had been withheld on the orders of President Trump.

Following me so far? Of the 12 witnesses called before the House impeachment committee, seven are or were employees of the Department of State, which means they work for Mike Pompeo. All who are still in the employ of that department were told by Pompeo not to appear. All of them defied orders and appeared under subpoena.

Where is Pompeo himself, you might ask? Well, he announced some time ago that he would not respond to a subpoena from the committee and has refused to testify.

So let’s review. The man who is in charge of foreign policy for the United States, the man whose policy we should be following in Ukraine, abdicated his responsibilities and left American policy in Ukraine up to a gaggle which included Rudy Giuliani and the so-called “three amigos,” Energy Secretary Rick Perry, Sondland and Volker. All of them were acting at the direction of the president of the United States. One of them, Sondland, even admitted that he was “taking orders from the president” in everything he did in Ukraine.

What they did amounted to a crooked scheme that the House impeachment committee is about to describe as bribery and extortion, and for which the full House will likely impeach Donald Trump.  If you go by the number of employees who testified over the past two weeks, the entire clusterfuck in Ukraine was a State Department enterprise.

Where was Mike Pompeo all of this time, you might ask? Nowhere to be seen. And what has he been doing since assuming the office of secretary of state last year?

It’s what he did when Trump picked up the phone and called Turkish President Recep Tayyip Erdogan and gave him the green light to invade northern Syria. Pompeo sat on his ass in his office in Washington while Trump stabbed our Kurdish allies in the back and Turkish forces killed several hundred Kurdish fighters, with whom we had partnered in the fight against ISIS in Syria and northern Iraq. He could have advised the president in advance of his call to Erdogan that it was a bad idea to abandon the Kurds. He did nothing.

It’s what Pompeo did when he and Trump sat across from the murdering Saudi Crown Prince Mohammad bin Salman last summer in Japan at the G20 summit. When Trump called the man who ordered the execution and dismemberment of Washington Post columnist Jamal Khashoggi “a friend of mine” and congratulated him for doing “a spectacular job,” He could have advised the president that he shouldn’t be meeting with a murderer. Instead, Pompeo did nothing.

He did nothing in Ukraine except sit back and watch while Trump’s squad of amateurs tried to railroad the new president of Ukraine into helping Donald Trump get re-elected. When it came time to tell the American people what had been done in Ukraine in their name, Pompeo did everything he could to keep the truth from coming out. He left the people who worked for him on the battlefield — Taylor, Yovanovitch, Holmes and the rest of them. Pompeo ran away and hid while his troops went before the Congress and told the truth.

Pompeo may have graduated first in his class from West Point, but he certainly hasn’t lived up to its motto, “Duty, Honor, Country.” He’s Donald Trump’s secretary of nothing. He’s first to kiss Trump’s ass, but last in loyalty to his troops and to his country. He is a disgrace and a coward.