The apple crisp that made me fall in love with... beets

The earthy flavor of the beets pairs perfectly with the tart sweetness of the fruit. 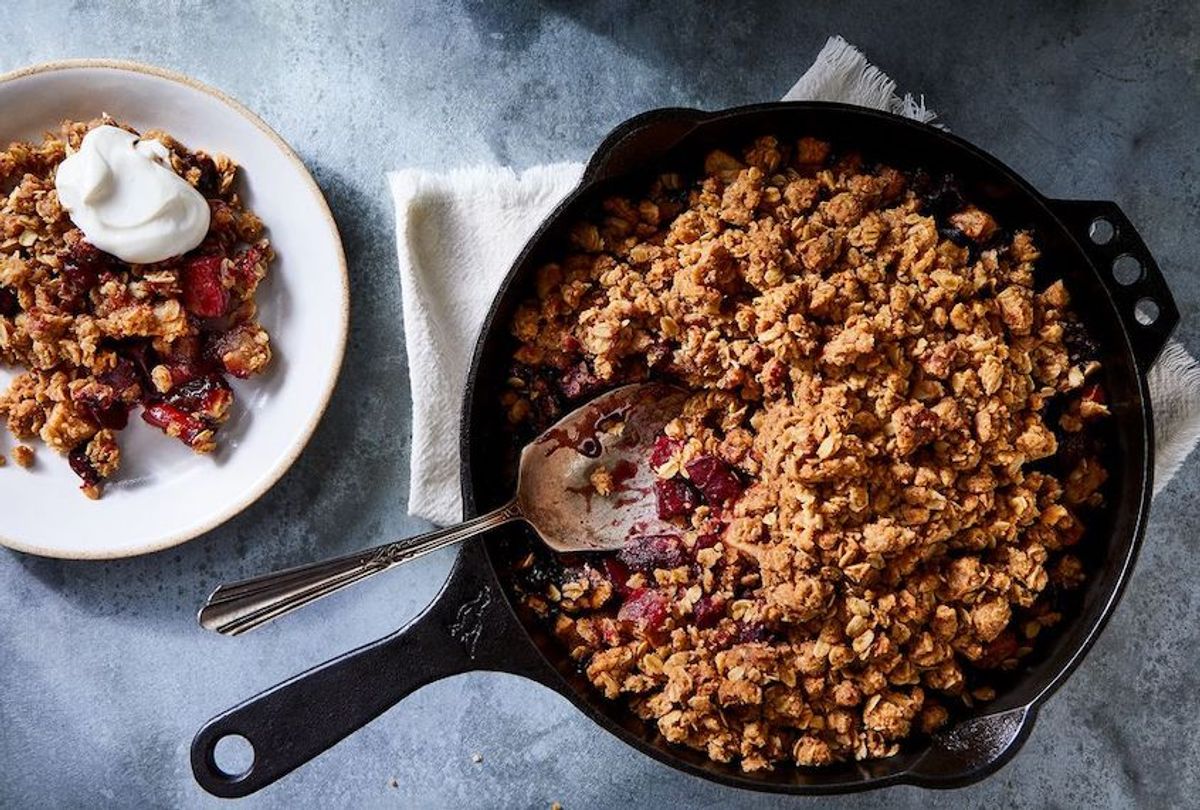 I didn’t always love beets. In fact, I used to loathe them. But it wasn't my fault. My first introduction to the root vegetable was via my father, the culprit for my aversion. He would boil them in unsalted tap water until tender and pawn off the red liquid as "borscht" for dinner. The soup (a generous term for his creation) tasted like dirt — so for the entire duration of my childhood, I was conned into thinking that beets tasted dirty, bitter, and metallic. And to make matters worse, my only other encounter with them was with a sałatki z burakami that was swimming in harsh white vinegar: a not-so-great rendition of a simple beet salad.

It wasn’t until I experienced beets in a dessert that I truly understood why my father loved them so much.

The dish that changed it all was a beet ice cream I had at a fancy restaurant on my 16th birthday. Instead of tasting like dirt, the beets presented themselves as the candy equivalent of a vegetable. They were gentle, sweet, and complex — not at all like the unappetizing beet water I was accustomed to. Just as dark chocolate has the ability to balance out desserts with its earthy bitterness, the beets did just the same to the ice cream. They rounded it out, adding a depth of complex flavor and bright red color that completely transformed the humble ice cream into something special. I would have never thought to add beets to an ice cream, but it worked. It was a revelation that made me question why I ever hated beets in the first place.

Beets are now one of my go-to ingredients to use in desserts. I’ve made cakes, ice creams, and cookies with them — utilizing both their striking color and distinct flavor to add excitement to my recipes. My absolute favorite dessert to add them to is apple crisp because, as it turns out, beets and apples are a perfect match. The earthiness of the beets tames the tart bite of the apples, and the sweetness of the fruit highlights the root vegetable's natural sugars. The juices from the two thicken into the most stunning red sauce that bubbles up the sides of the crisp as it bakes like crimson lava.

A dollop of vanilla goat cheese made with yogurt complements the beets and finishes the crisp with a cool, tangy bite that brings it all together. It’s an unexpected recipe I’ve made several times, and has the ability to convert even the most die-hard beet haters into newly enlightened lovers.

I now understand my father’s love of beets. I love a crunchy sałatki z burakami, hearty (properly made) borscht, chilled chlodnik litewski, and all of the other classics my father grew up with. I’ll happily eat them in everything from stews to cakes, and I simply can’t get enough of them. All it took was experiencing them in a newer, sweeter context to change my mind. Maybe it’s because I am my father’s son, so a love of beets is in my DNA and an epiphany was bound to happen. Or maybe it’s because beets are actually just really, really good — when used right.

Either way, I blame my father’s “borscht” recipe for my rocky introduction, and present to you this crisp so you don't have to go through what I went through.

2. To make the topping: Combine flour, oats, melted butter, walnuts, brown sugar, cinnamon, and salt in a large bowl and mix using your hands until large clumps form. Set aside.

3. To make the filling: Melt butter in a large 10-inch cast-iron skillet over medium heat. Add beets and cook, stirring often, until fork-tender and lightly browned on the edges, about 12 minutes. Remove skillet from heat and let cool for 10 minutes.

4. To the cooled skillet, add apples, brown sugar, orange juice, cornstarch, vanilla, cinnamon, nutmeg, and cloves. Toss to thoroughly coat the apples and beets. (If your skillet is too small, transfer the mixture into a large bowl, toss to coat, and pour back into the skillet.)

5. Distribute prepared topping evenly over beets and apple mixture. Bake until the top is lightly browned and the sides are bubbling, about 30 to 40 minutes. Let cool for 20 minutes.

6. As the crisp is cooling, make the tangy vanilla goat cheese: Whisk yogurt, goat cheese, sugar, and vanilla extract together in a medium bowl until smooth. Serve alongside crisp and spoon onto individual servings.