The popular baby alien from "The Mandalorian" is probably not actually a baby Yoda, but an infant from his species 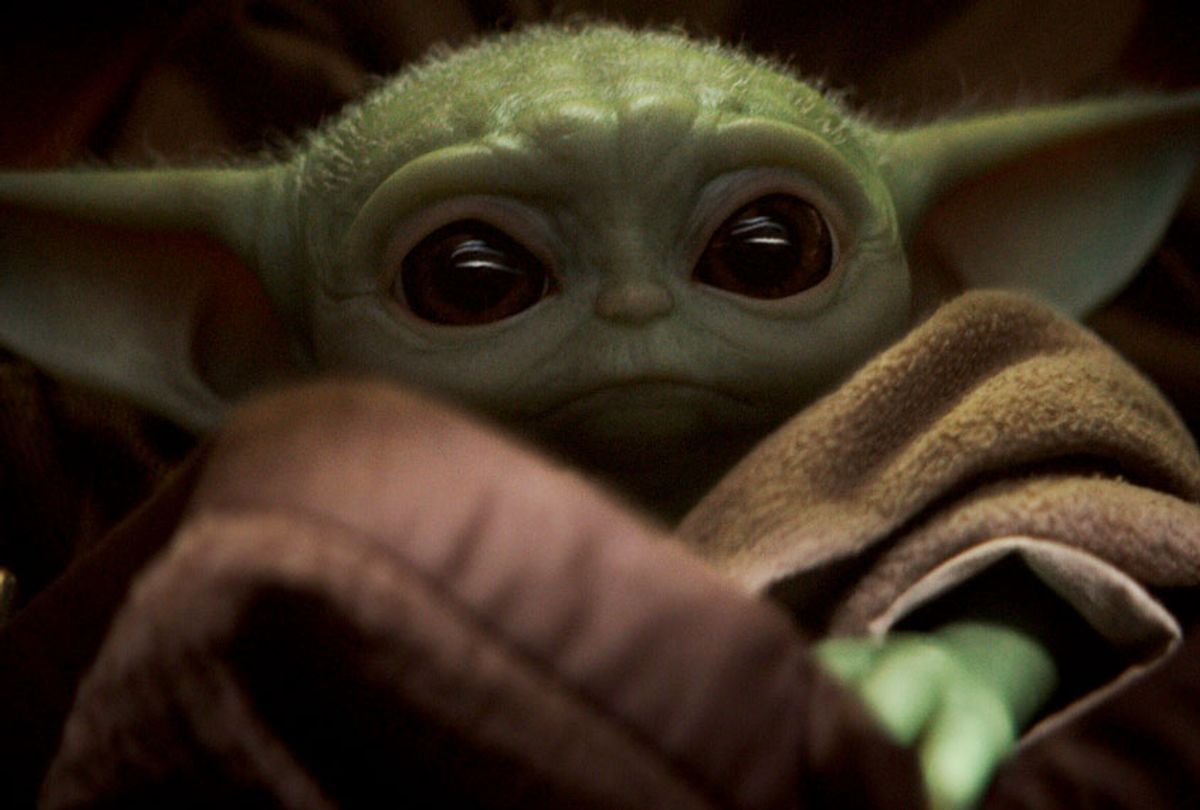 The Child is a mysterious alien pursued by bounty hunters on behalf of Imperial interests. (Disney+)
--

Now that Baby Yoda has been unleashed upon the world, his appeal cannot be denied. And even though the demand for adorable Baby Yoda merch has been high as soon as he emerged from his robe/blanket, gazing from the depths of his floating bassinet, fans were left empty-handed and fully wallet-ed. This will soon be rectified. Fans of the hit "Star Wars" series "The Mandalorian" will be able to own official toys, clothes, and other merchandise based on the pint-sized, pointy-eared extraterrestrial rugrat.

Baby Yoda, as fans of the new Disney+ show will be quick to tell you, is almost certainly not the character of Yoda himself as a young child. Introduced to audiences five years after the events of "Star Wars: Episode VI - Return of the Jedi" (and, consequently, after Yoda died), the youthful creature from Yoda's species is referred to as The Child and was sought by the titular character The Mandalorian (Pedro Pascal) at the behest of The Client (Werner Herzog) and Imperial Dr. Pershing (Omid Abtahi). It has already been revealed that Baby Yoda has Force-sensitive powers much like Yoda himself, and he is clearly quite valuable as he was seen being experimented upon by Dr. Pershing. Although a baby version of his species, The Child is actually 50 years old, which makes sense considering that Yoda was 900 years old when he died.

So what was the reaction to the introduction of Baby Yoda? To paraphrase a famous line from the original "Star Wars" movie — it was as if millions of voices suddenly cried out in "Awwwwww" and began creating memes.

Given the popularity of the character, it seemed odd at first that there wasn't any merchandise available based around such an obviously toyetic character. Yet series creator and showrunner Jon Favreau told a Collider reporter during a red carpet interview at "The Mandalorian" premiere that the character's likeness had not been capitalized upon because Disney wanted to respect their storytellers.

“We really wanted to have it be that you had to watch it yourself, so that every time you watch the show, there are new twists and secrets that come out. That requires a lot of restraint from the people who are footing the bill, saying they’re gonna hold back on certain things so that the public doesn’t know ahead of time. Part of that was holding back on some of the merchandise and holding back on some of the characters," Favreau explained.

Of course, now that Baby Yoda's existence is known to the millions of people who may not have even watched "The Mandalorian" but have access to social media, there is no reason to avoid merchandising opportunities. Indeed, as The Hollywood Reporter observed last week, there has already been an explosion in bootleg merchandise for the popular character. Now CNBC has reported that official apparel and accessories featuring The Child will be available at Amazon, Box Lunch, Hot Topic, Kohl's, Macy's, Target and Zazzle.

The controversies over appropriations of Baby Yoda have not been limited to the world of bootleg merchandising. Last week, a number of Baby Yoda GIFs from Giphy were pulled down for mysterious reasons; it has been speculated that Disney was behind the move, but no proof has emerged that that was the case.  Either way, the GIFs are now back, with Giphy cryptically explaining in a statement that "there was some confusion around certain content uploaded to GIPHY and we temporarily removed these GIFs while we reviewed the situation." The statement apologized to both Disney and Vulture, whose GIFs were impacted by the takedown.

The Baby Yoda memes have, incidentally, managed to perfectly capture the zeitgeist of 2019 pop culture. They include "OK, boomer" memes, jokes about the difference between how people look on Instagram versus real life, parodies of the "woman yelling at a cat" memes, and (of course) a number of jokes about how cute he is.

Despite all of the gushing over Baby Yoda, though, we still aren't entirely sure what The Child's relevance will be to the broader "Star Wars" universe. Favreau has already described The Child as an "important character" and a number of theories have been put out there regarding what purpose Baby Yoda will actually serve. These include that he is going to be cloned for a Jango Fett-esque army, that he is a clone of Yoda himself, that he will be exploited for his midi-chlorians (the microscopic life forms that "Star Wars: Episode I - The Phantom Menace" established are connected to Force sensitivity), that he was born in the same year as Anakin Skywalker and will somehow be tied into the Darth Vader storyline, that The Child's story will be linked to that of Emperor Palpatine and the climax of "Star Wars: Episode IX - The Rise of Skywalker" or that he will be part of a plan that also entails the Sith Troopers seen in recent "Rise of Skywalker" trailers.

"The Mandalorian" tells the story of a "Star Wars" bounty hunter, known only as The Mandalorian, and his morally complex adventures as he attempts to carry out the will of The Client and Imperial Dr. Pershing. In the three episodes that have been released, The Mandalorian has yet to remove his helmet, which adds to the mystique. In her initial review of the pilot, Salon TV critic Melanie McFarlane wrote that the show has a "spaghetti-Western-meets-ronin-samurai vibe."

"The Mandalorian" is streaming new episodes weekly on Disney+.