Tucker Carlson is not "just joking" about rooting for Russia 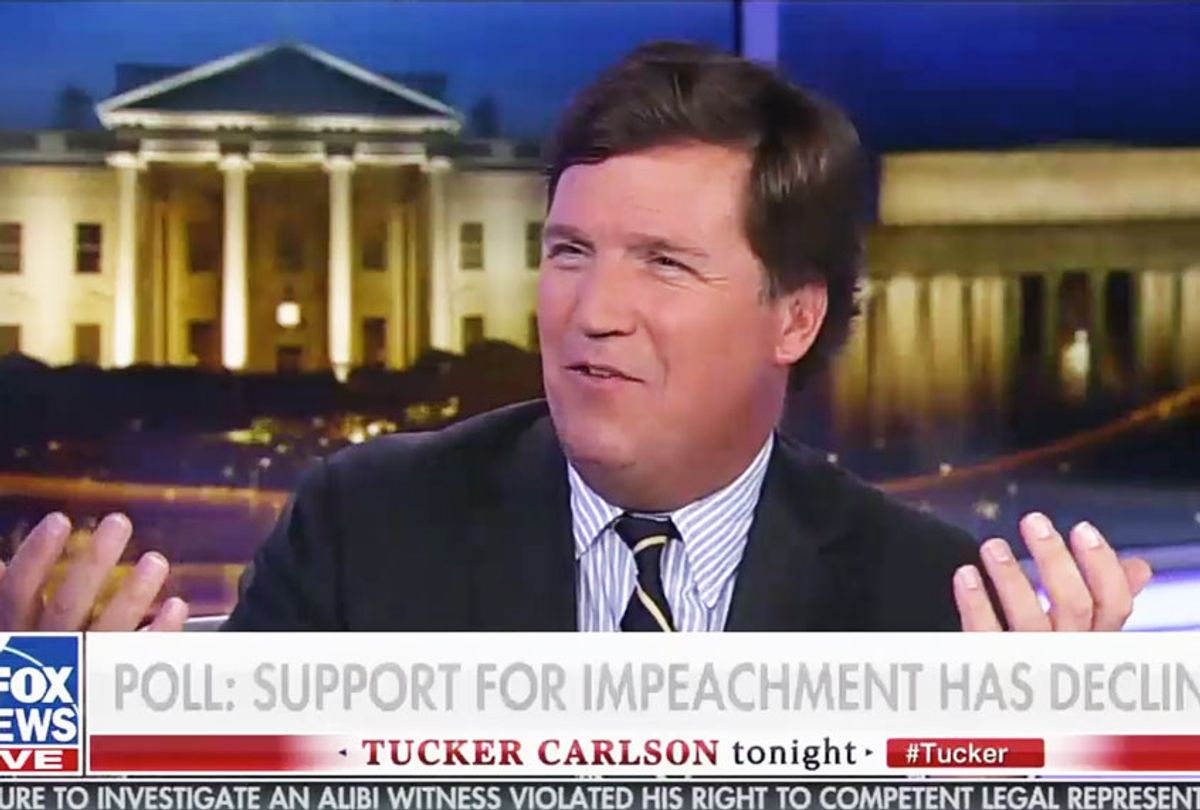 There is an air of inevitability to Fox News host Tucker Carlson declaring, as he did on Monday night, "Why shouldn’t I root for Russia? Which I am."

The topic on "Tucker Carlson Tonight," the highly rated cable news program that is a particular favorite of white supremacists and neo-Nazis, was the impeachment of Donald Trump. Carlson, unsurprisingly, wants to minimize the evidence that Trump was running an extortion scheme aimed at forcing Ukrainian President Volodymyr Zelensky to offer public support for a smear campaign against former Vice President Joe Biden. The crux of Carlson's argument was that it's silly to care about all this: So Trump withheld military aid from Ukraine in an effort to blackmail Zelensky into backing Trump's lies. So what?

"[P]eople are dying on the front lines," said Richard Goodstein, a former adviser to Hillary Clinton who foolishly accepted the role of the evening's punching bag during Carlson's propaganda blitz. "You think it's a joke."

Carlson was not to be shamed about his total indifference to the lives of Ukrainians who trying to defend their nation against Russian aggression.

"Why do I care what is going on in the conflict between Ukraine and Russia?" he declared. "And I’m serious. Why do I care? Why shouldn’t I root for Russia? Which I am."

Towards the end of the episode, Carlson moved to cover his booty by claiming, "Of course, I’m joking," arguing that he only said it to troll the left.

Notably, however, Carlson declined to offer any support for Ukrainian independence, obnoxiously hiding behind some pablum about how he's "only rooting for America."

No one should be fooled by this half-hearted retcon. Of course Carlson is rooting for Russia, an anti-democratic autocracy, to overwhelm and destroy Ukraine's efforts to establish a free and open democracy. That's completely on-brand for Carlson, who has been a champion of Trump's more fascistic urges and who has been the most aggressive Fox News personality in helping reshape American conservatism into an openly white nationalist movement.

Ever since he took over his prime-time spot from the disgraced Bill O'Reilly, Carlson has acted as the tip of the spear for a more authoritarian and frankly fascist brand of conservatism. Carlson has kept up a steady drumbeat of segments designed to mainstream talking points from neo-Nazis and other white nationalist groups as "common sense" conservatism. This, of course, aligns with the agenda of Trump, who employs Stephen Miller, an overt white nationalist, as his primary speechwriter and one of his main advisers.

The "just joking" gambit should be familiar to anyone who has observed the behavior of the fascist trolls who adore Carlson so much. It's a standard rhetorical strategy for testing and pushing boundaries. By hiding behind the claim to be "joking," fascists can gauge reactions to their ideas and help gradually normalize certain ideas or areas of discussion. Online neo-Nazis, for instance, hid for years behind claims that their racism was "ironic" and "just for the lulz" in order to test and popularize racist ideas. The neo-Nazi website The Daily Stormer even put out a guide for how to use the fake "just joking" stance to spread racist propaganda.

Carlson is playing the same game with his Russia "joke." For years now, there's been genuine, if sublimated, conflict on the right over how to think about Russia and the war it's waging in Ukraine. Ostensibly, Republicans support the spread of Western-style democracy and oppose Russian efforts to undermine democracy around the world. But in the face of Trump's flagrant preference for Russia and for dictatorships over democracy, Republicans have gone squishy on Russia, starting with the party's decision to weaken its support for Ukrainian independence and democracy in the 2016 party platform, at Trump's behest.

That internal confusion was on full display over the past two weeks of impeachment hearings. A series of witnesses — some of whom, like former National Security Council Russia adviser Fiona Hill, are pretty clearly conservatives — reiterated the importance of supporting Ukraine in the war with Russia. But Rep. Devin Nunes, R-Calif., along with others of the Trump faithful on the House Intelligence Committee, spent much their time demonizing Ukraine and defending Trump's hatred of that country. Other Republicans, however, insisted that, even though they were defending Trump, they still believed in Ukrainian independence.

Clearly, the question of whom to "root for," between Ukrainian democracy and Russian authoritarianism, remains unresolved in the Republican Party. Which is why Carlson popped a "just joking" on there to cover his bases. But it's also clear that he's moving closer to Moscow, and if history is predictive, Carlson will gradually turn up the heat on this issue, as he did in promoting white nationalist ideas.

Honestly, it makes sense for Carlson, and Republicans generally, to do this. While the Putin-directed hacking conspiracy to interfere with the 2016 election was done to benefit Trump, the point was more to benefit Putin's long-term goal of undermining democracy worldwide.

Unfortunately, that anti-democratic goal also suits the current iteration of the Republican Party which, for demographic reasons, cannot win nationally in truly democratic elections. Instead, the party has been relying on our outdated constitutional design, which awards disproportionate electoral weight to rural areas over urban ones. So even though Democrats get far more votes in almost every election than Republicans do, the latter cling to a share of power they haven't earned.

But even with that unfair advantage, Republican power is threatened. So the party has turned ever more to undermining democracy: Voter suppression, gerrymandering and campaign finance deregulation. All of it is meant to ensure that voters are unable to determine their own leaders in fair and free elections. So it's not surprising that Republicans aren't just minimizing the amount of Russian-directed cheating in the 2016 election, but also the evident fact that Trump was conspiring to cheat in the 2020 election as well.

Carlson's segment on the Ukraine-Russian war was, in large part, about turning impeachment into an incomprehensible foreign policy issue, so he can convince Fox News viewers that it has nothing to do with them and they can safely ignore it.

As Adam Serwer of the Atlantic pointed out, it isn't just Ukraine Trump has victimized. Indeed, "the core reason for the impeachment inquiry" is that "the Trump administration was engaged in a conspiracy against American democracy."

It's also a stance Carlson has been selling to Fox News viewers for years by framing white conservatives as the only legitimate Americans, a view incompatible with democracy. Gradually turning up the volume of support for Russia's worldwide assault on democracy is an unsurprising and inevitable — if deeply disturbing — part of Carlson's larger agenda.