Not content with the mythical "war on Christmas," Trump now claims that liberals want to cancel Thanksgiving 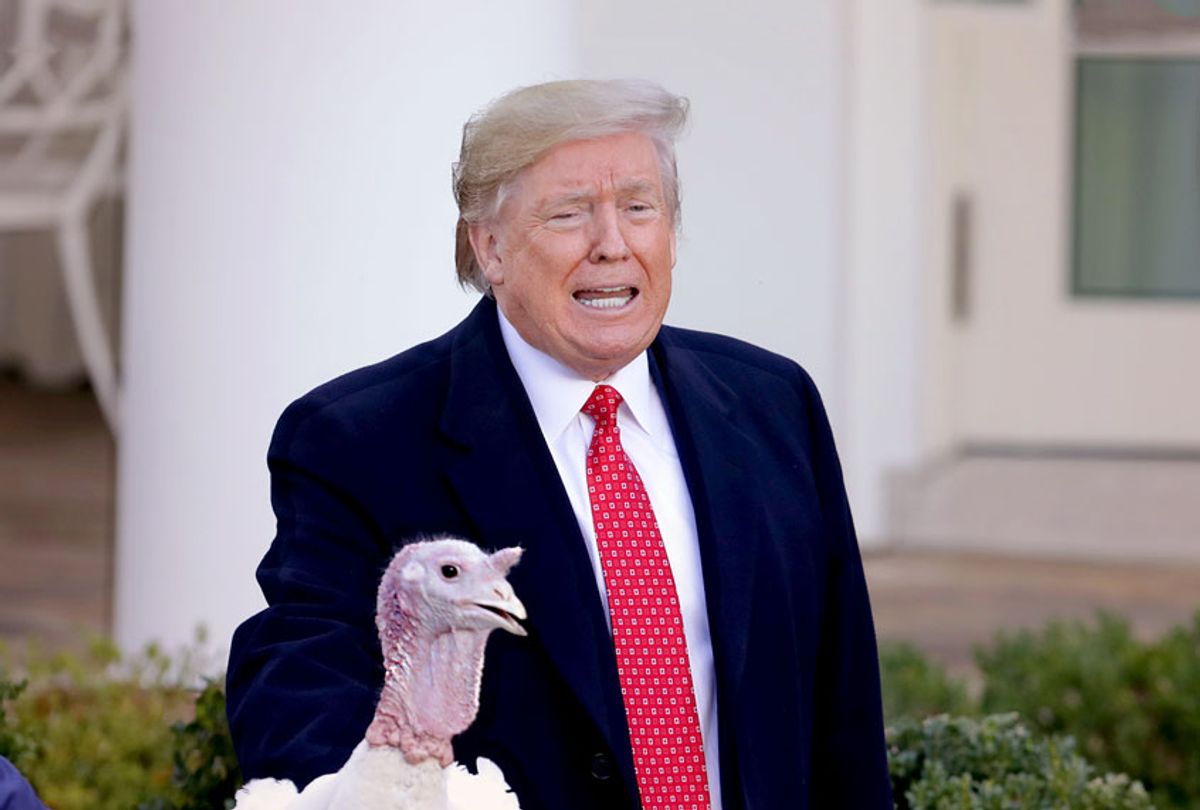 U.S. President Donald Trump gives a presidential ‘pardon’ to the National Thanksgiving Turkey Butter during the traditional event with first lady Melania Trump (R) in the Rose Garden of the White House November 26, 2019 in Washington, DC. The turkey pardon was made official in 1989 under former President George H.W. Bush, who was continuing an informal tradition started by President Harry Truman in 1947. Following the presidential pardon, the 47-pound turkey which was raised by farmer Wellie Jackson of Clinton, North Carolina, will reside at his new home, 'Gobbler's Rest,' at Virginia Tech. (Chip Somodevilla/Getty Images)
--

Increasingly desperate as the evidence mounts showing that he definitely committed the crimes he will soon be impeached for, Donald Trump auditioned a new lie to whip up his culture-war base at a rally in Florida Tuesday night: Overly P.C. liberals or socialists or whoever are trying to cancel Thanksgiving.

"You know, some people want to change the name Thanksgiving. They don't want to use the term Thanksgiving," Trump declared in front of the crowd, who ate it up, booing wildly at these imaginary liberals and their imaginary war on Thanksgiving.

This war on Thanksgiving is clearly a cut-rate sequel to the wildly successful "war on Christmas," a long-running right-wing lie that liberals want to cancel Christmas. This was built up over years of Fox News pundits flipping out because sometimes people use the term "Happy Holidays" to accurately reflect the fact that there are various other December holidays — including Hanukkah and Kwanzaa — that are celebrated in addition to Christmas. (In the right-wing imagination, holidays are like the Highlander: There can only be one.)

Trump acknowledged as much, in his fashion, saying, "And that was true also with Christmas, but now everybody's using Christmas again."

"Remember I said that?" he added, getting nostalgic for his greatest hits of lies.

Unsurprisingly, the right-wing media immediately took up this lie and ran with it.

Fox News celebrated its orange champion's heroic stand against fictional villains with the headline, "Trump vows not to change the name of Thanksgiving despite cries from the 'radical left.'"

On "Fox & Friends" Wednesday morning, the story had morphed into speculation about the nefarious motives of the imaginary liberals who were scheming to cancel Thanksgiving.

"I think the issue that a lot of people have with potentially changing that name is the fact that in that name we're expressing gratitude," one of the interchangeable female hosts declared, even in the face of male hosts expressing muted doubts about Trump's tall tale.

As often happens in the age of Trump, it appears this nonsense also originated with the same right-wing media that is now eagerly hyping Trump's lies.

As Media Matters editor-at-larger Parker Molloy chronicled, earlier this month Fox News spent days running scare stories claiming that liberals are trying to take away Thanksgiving. Hosts on multiple shows worked themselves into a frenzy, railing at the liberals who allegedly want "to tear down an American tradition that was fine" and "are demanding you cancel Thanksgiving dinner".

The justification for these claims? A HuffPost story about the climate impact of Thanksgiving — the meal, the travel, the food waste — and strategies to reduce that impact. Nowhere in this story, not a single word, is there any indication that the writer, Alexandra Emanuelli, wishes to cancel Thanksgiving. The opposite, in fact.

"No one should be discouraged from enjoying the holiday or celebrating with family and friends," the article reads, in a paragraph that comes before the page break, so that all but the absolute laziest readers will see it.

This whole situation is a perfect example of the Trump-Fox News closed-loop ecosystem of bulls**t. Fox News comes up with some nonsense story designed to stoke the cultural resentments of their elderly white viewers. Trump, who is 110 percent the target demographic for this nonsense, half-remembers what he heard watching his "stories" and spits out an even more ridiculous version for his adoring crowds, who will eat up any lie, no matter how silly. And because someone who is technically the president of the United States said it, right-wing media sources then use it as an excuse to pretend the lie, which gets sillier by the second, has some validity.

It is true that for five decades now members of the Aquinnah Wampanoag tribe mark Thanksgiving Day by gathering at Plymouth Rock for what has been deemed the "National Day of Mourning." This event is largely an effort to counteract the specific myth of harmony between the Puritans who settled in New England in the early 17th century and the Native Americans who were already living there, and to remind the public that Native Americans were subject to a multi-century campaign of theft and genocide at the hands of European immigrants.

This fact was seized on by Fox News to justify Trump's fantasy that there's a serious threat to the name of Thanksgiving, one that he alone has prevented from being enacted. There is also no evidence of any connection between that event and a random HuffPost article suggesting that people might try to make Thanksgiving celebrations more environmentally friendly.

This is a typical right-wing propaganda trick: Take the tiniest grain of truth or plausibility and use that to justify the 99.9% of the paranoid narrative that is straight-up lies.

There's a deep irony to this fake war on Thanksgiving, which is that the modern version of the holiday — despite the legends of Pilgrims and Native Americans — owes more to the social reformers, such as slavery abolitionists, of the 19th century. Abraham Lincoln declared Thanksgiving Day a national holiday in 1863 as a signal of his intention to reunify the United States despite the attempted secession by slave-holding Southern states.

Also, it appears that the person who is really gunning to ruin Thanksgiving is Donald Trump's eldest son.

"Trigger a liberal thanksgiving!" Donald Trump Jr. tweeted recently, trying to get someone besides the Republican National Committee to buy his "bestselling" new book. He went on to suggest that his followers "talk politics at the thanksgiving table" with an eye towards getting a "pic/vid of something/someone triggered." Which is all right-wing gibberish for using racist and/or sexist rhetoric to anger a relative, so you can then mock them online for having the nerve to respond.

What a heartwarming sense of the holiday spirit!

But really, all this fits in with the larger "war on Christmas" and now "war on Thanksgiving" rhetoric flowing from the right. It's never been about actually protecting these holidays, which are robustly celebrated and in no danger of disappearing. It's always been about remaking these holidays in the image of right-wing grievance politics, turning them away from traditional values of love, community and generosity and towards the same nastiness and cruelty that infuses every aspect of conservative politics in the age of Trump.