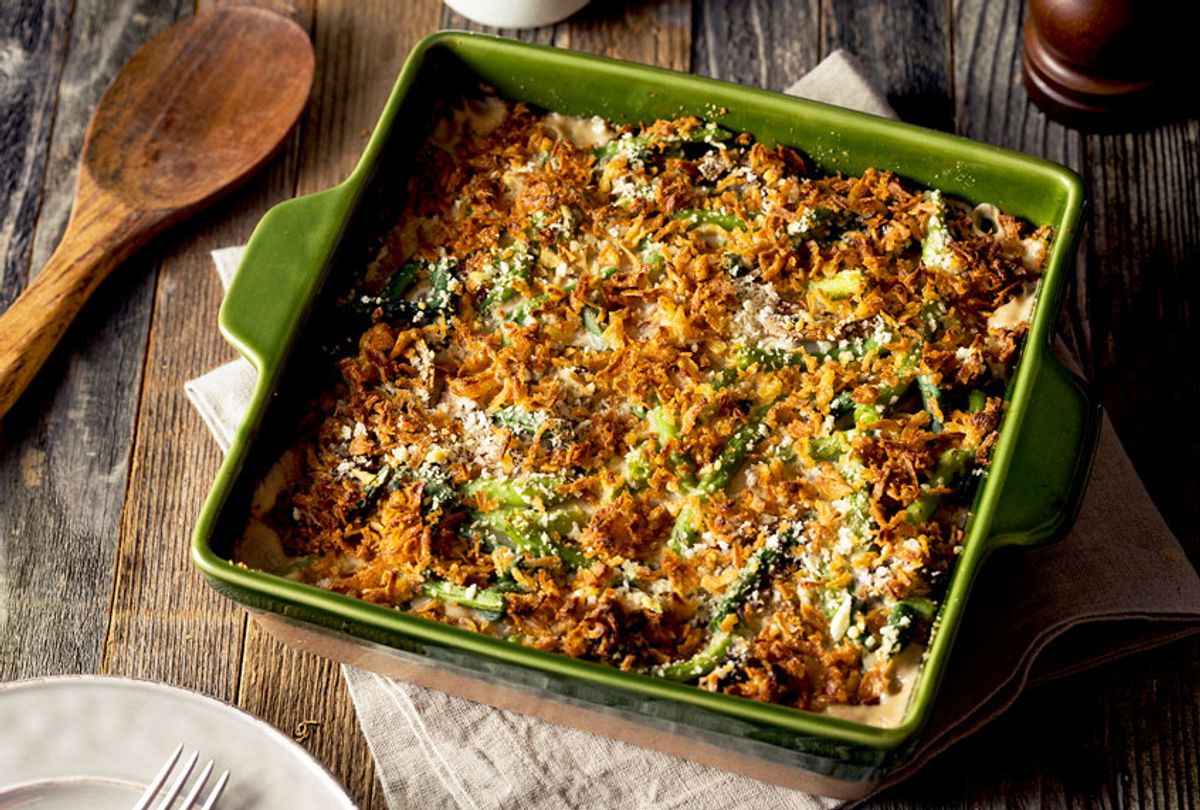 Originally this was going to be a gentle story about reclaiming and modernizing clunky holiday foods, using the specific example of that most loved or loathed Thanksgiving classic, the green bean casserole.

Then I read Jennifer Weiner’s opinion piece, “Don’t Mess With the Dressing. Don’t Tinker With the Turkey,” and my thesis shifted – but probably not in the way you might suspect.

I’m still going to defend the merits of making a green bean casserole from scratch and forgoing the two-can gloop-and-glop (albeit more briefly than previously planned). Before that, I feel the need to stand up for holiday cooks and stand against the unspoken holiday tradition of regressing back into so-called “family roles.” The two are related.

In her piece Wiener describes, with great humor and affection, her brother Joe’s bottomless appetite and his boundless laziness. When they were younger he would bellow for his mother, referring to her as Fran, and order her to prepare him a meal. Not with a please, or a thank you, just a directive.

“Fran!” he would roar, according to Weiner. “Make me some eggs!”

And Weiner’s mother would hop to it, no questions asked. When Weiner questioned her mother about this, “She always gave the same answer,” Weiner writes.

"Joe is my baby,” my mother replied, as Joe nodded approval at this obvious statement of fact.

Joe is the baby. And so, when I was promoted to the family’s Thanksgiving hostess, I knew that keeping Joe happy was Job One.

Maybe you know where this is headed. Weiner, who loves to cook, went all out. The menu she describes is gorgeous: cornbread sausage stuffing made with homemade cornbread and locally sourced sausage. Cranberry chutney with orange zest. She also made green bean casserole constructed out of “béchamel sauce with fresh herbs and sautéed shiitake mushrooms . . . topped with deep-fried onion sprinkles, made with love, at home.”

Joe, the baby, comes into Weiner’s home, eyes the casserole and throws a fit. And then . . .

"Fran!” he yelled. “Make me some casserole!”

First, the morals of this story. Weiner lists hers near the end of her piece, but I’m leading with mine. One: respect the efforts and generosity of your holiday cooks and hosts, even and especially if said cooks and hosts are family. This should go without saying.

If someone is charitable enough to invite you into their home to eat food they spent hours preparing, your job is put that food in your mouth and express your gratitude to the best of your ability. When you word hole isn’t full of food, say “wow” or “this is good” and most importantly, “thank you.”

If the person preparing the food is your oldest sibling, a role that Weiner takes to mean “I am the role model, the good example, the provider,” say thank you.

If the person preparing the food is the youngest — we’ll get to what Weiner thinks that means in a moment, because that’s the part that really got me revved up — the overall requirement is the same. Be grateful. Respect the fact that your sister or brother cares enough about you, the older sibling, to make sure you are not sitting at home alone in some sad, crooked chair under a solitary, swinging light bulb while slurping down a Hungry Man dinner for one.

Above all, do not presume to complain about what is on the table, especially if they are nice enough to ask for your input on the menu. Do not bitch about their decision to prepare a dish different than “Mom used to make.”  Don’t you dare act like some tantrum-throwing brat in a high chair even though you are closer in age to qualifying for the AARP than you are to being legally able to ride in an automobile without a car seat.

If you are not thanking the cook or enjoying the cook’s handiwork, shut your gob.

You may be sensing a pointedness to my tone. You are correct. Understand, however, that it’s not directed at Weiner. By all accounts she seems delightful, funny, and overly accommodating of her brother Joe, who I picture as a gigantic Stay-Puft marshmallow manchild.

“The baby of the family will always be the baby,” Weiner declares in the second of her “morals.”  (I agree with her first one: It’s true, only monsters serve turkey without skin.) And there it is, one of my biggest peeves. Joe and other fully grown infants like him make life harder for others who happen to be the youngest in their family but somehow managed to do things for ourselves . . . and others.

There were five kids in my family growing up, and like most families, each of us has always had a role. As the youngest, I was the worker bee, the pleaser, the eventual escapee. And I’ve always loved to cook.  I’ve also always resented the assumption, one perpetuated by people like Joe, that I am “the baby.” There are specific connotations associated with that term that are absolutely maddening, and they typically float to the surface like a Macy’s parade balloon at holiday dinners.

This probably sounds silly to anyone raised beside some coddled moppet, but trust me: if the dynamics of your family meals had more in common with the dinnertime scene in “The Texas Chainsaw Massacre” (minus the cannibalism) than, say, “The Family Stone,” you would also resent people goo-gooing at you about being “spoiled.”

If you identify more with The Final Girl than any princess, you would not take kindly to being referred to as "the baby." People who think that way are informing you that they do not respect you.

Ergo, at these family gatherings, even if you are the cook, you are permanently relegated to the kids’ table. Unless, of course, you host your own damn Thanksgiving. Here is my second moral.

My lovely aunt always took on Thanksgiving duty, so the only indignity I had to deal with at her house was folding my five foot-10 inch frame into a too-small chair at the kid’s table well after I’d passed legal drinking age (“Widdle baby!”). But following many returns home for other holidays where I’d cook for abusive, ungrateful family members and their children, enduring criticism and hissing through every step of the prep, table setting, service and clearing, I decided to reclaim one holiday for myself.

I hosted a Thanksgiving in a small house I rented from a former friend who split the duties with me. I also fielded a specific request, posed in a more kindly fashion than Weiner’s brother does, for green bean casserole. Another request, equally as specific, asked me to leave it off the table.

As someone who takes her home chef duties seriously and did not grow up with green bean casserole on any holiday tables, I split the difference. I have no emotional connection to the classic recipe of canned vegetables stirred up with canned cream of mushroom soup, and topped with Durkee fried onions.

But the image of fresh, bright green beans swimming in a creamy mushroom sauce with a homemade crunchy topping of some variety — I went with shallots that first time — sounded wonderful. So I bought a package of good quality frozen haricots verts from my local grocery store, made the white sauce, fortified it with gruyere, topped it with crisp-fried shallot coins and baked it up.

Although I had no frame of reference based on “like mom used to make,” it tasted great. The guests who wanted the dish ate it. The one who didn’t, did not complain. And if they did, they knew the door was a few steps away. To them, I wasn’t the “baby.” I was the holiday chef, and this was Thanksgiving, the home cook’s day to shine. When I hosted again the following year, they gladly showed up.

Here, then, is Weiner’s moral number three: “Thanksgiving is a time for tradition, which means no revising the family standards.” Speaking as someone whose immediate family’s standards deeply suck, I beg to differ. Keep the traditions you love. Make new traditions for yourself.  Accommodate the easy asks: make the ginger-spiked cranberry chutney if that’s what you want, knowing how easy it is to open a can of the jellied stuff and serve up that log of wiggly garnet weirdness right next to it.

Otherwise, cook whatever you desire, in the manner of your choosing. If you want to construct a green bean casserole from scratch, go ahead. The person who prepares the meal makes the rules, be they the oldest sibling, the youngest, or one of those middle child psychopaths.

No matter what, refrain from infantilizing your adult sisters and brothers. Odds are they don’t appreciate it. On the other hand, if they act the part the way Weiner’s brother did, let them know that it’s your table and you have no problem sending them to their rooms – in their own houses, across town or several states away, and without a to-go plate.

With that, you’re gonna read the following green bean casserole recipe and dammit, you’re gonna like it. (Remember the usual caveats: I am a TV critic who loves to cook, not a chef. Taste as you go along and make whatever seasoning adjustments are necessary.)

Optional: 2-3 slices of thick-cut bacon, diced or thinly sliced. (If you use bacon, lay off the olive oil)

Salt and pepper to taste

(You can make this part from scratch, but I recommend sparing yourself the trouble, you have other things to do.)

Pre-heat oven to 350 degrees. Bring a large pot of salted water to a boil.

While the water is heating, heat the olive oil over medium heat. (If you’re using bacon, fry it until it’s just about crispy, then add the other ingredients as directed.) Add ½ cup of onions and cook for around 5 minutes, just until soft and translucent. Add the mushrooms and garlic and cook until the mushrooms are soft. Spoon the mixture into a bowl and set aside.

Once the water has boiled, add the green beans and let them cook for about five or six minutes until they are bright green. Drain them in a colander, then plunge them into cold water to halt the cooking process. Drain again and set aside. If they’re still holding water when you’re ready to use, get a clean kitchen towel and pat them dry.

Melt butter in a saucepan over medium-low heat and add the tablespoon of onion, cooking until translucent and soft. Add the flour and whisk until well blended. Continue cooking and stirring for about two minutes. Add the salt and pepper to taste, and the pinch of nutmeg.

Combine the chicken broth and cream and whisk them in gradually. Continue gently whisking the mixture over low heat until the mixture thickens. When you’ve just about reached the desired thickness, add the cheeses, stirring continuously until the mixture is smooth.

Grease a 13 by 9-inch casserole dish.

Add the mushroom and onion mixture to the sauce. Then gently add the beans, folding all of the ingredients together. Spoon the combination into the dish, add the topping in any combination you choose; I like to go heavier on the fried onions.

Bake for uncovered 30 minutes or until the sauce bubbles and the crust is golden. Serve hot.