How Donald Trump ruined Christmas: I won't celebrate this year, and he's why

My enthusiasm for the Christmas season was always weak. Amid the ugliness of Trump's America, it's disappeared 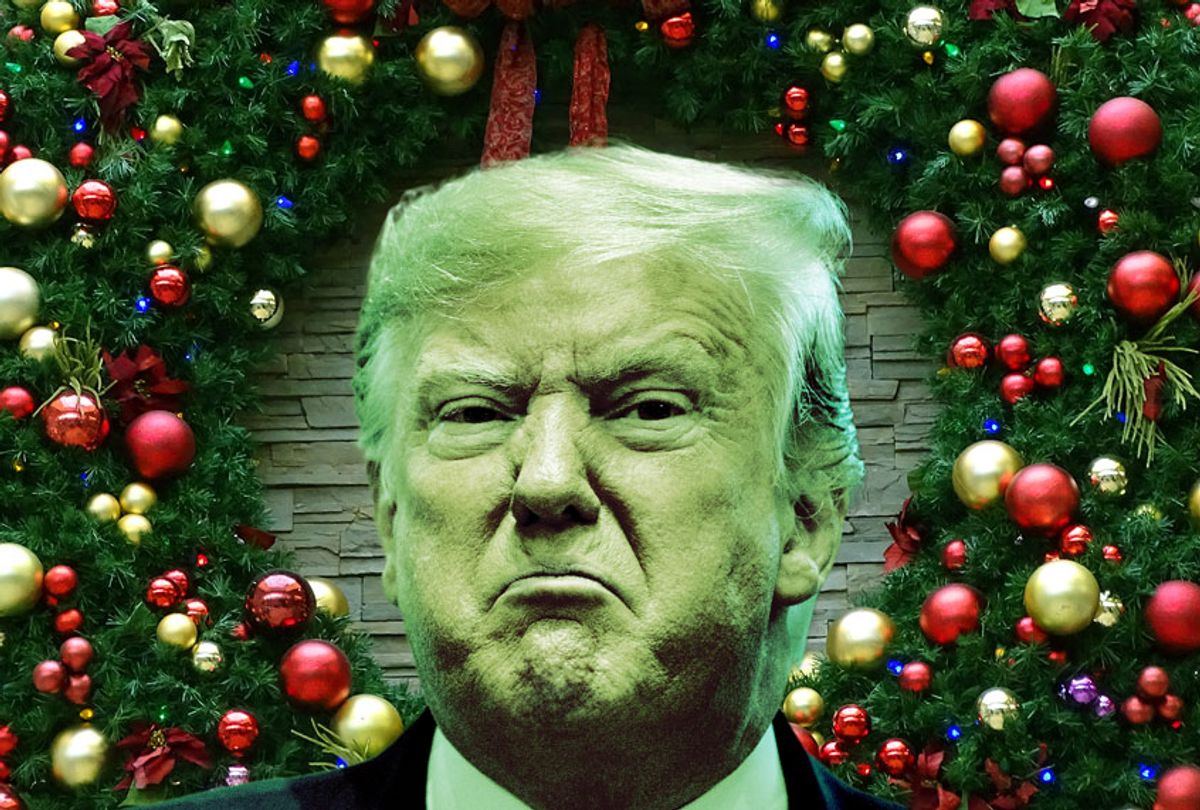 It wasn't a conscious decision, but it's time for me to admit it: I've mostly given up on Christmas.

It was never a holiday of great importance to me. I've never put up a Christmas tree, for instance, though I have often indulged in some tinsel and lights to mark the holiday. But for most of my adult life, Christmas still had some meaning, and I've made an effort to mark the day as somehow special. I made pancakes for breakfast. My partner and I opened gifts. We tried to make something out of it.

But that has dissipated in the past couple of years. Even putting forward a minimal effort to mark the day as anything but a boring  24 hours that isn't even attached to a three-day weekend feels too hard.

The gross fact of the matter is that whatever enthusiasm I once felt for Christmas has dissipated entirely in the age of Donald Trump. He ruins everything he touches, and Christmas, for me, is no exception.

I'm an atheist, and have been at least my whole adult life. So the concept of Christmas as a religious holiday has never had any hold on me. But for believers and non-believers alike in this country, it's always been more of a secular holiday, at least in the United States. It's  about celebrating family togetherness and a larger sense of the nation coming together in the spirit of joy and generosity.

But all that feels like a lie in Trump's America.

Forget Tiny Tim declaring, "God bless us, every one!" It's clear that for that 40% of people in the Trump cult, it's closer to "Damn anyone to hell who isn't exactly like us!"

For years, Fox News has been hyping the annual "War on Christmas" lie, falsely claiming that "liberals" have banned saying "Merry Christmas" or other expressions of Yule-specific cheer. But Trump and his minions have taken this lie and pumped steroids in it. Now it has morphed into something even uglier, a way to imply that the point of Christmas is to declare white supremacist America as the only "real" America and to tell everyone else they can go hang.

I recognize that many people react to this campaign by declaring the intent to reclaim Christmas in the spirit of love. No doubt that's the correct response. Good for them. But I don't have the energy for it anymore.

For me, it's personal. My family is mostly a bunch of Trump voters, sucked up into a vortex of propaganda and lies, unable even to admit basic facts about the world that run contrary to what their tribal politics dictate. That sort of thing is stressful on a normal day, but makes a mockery of the idea of familial love and harmony.

This isn't a matter of political differences that can be set aside for the sake of the holiday. This is about not being able to make merry with people who think nothing of voting for a man who is on tape bragging about sexual assault, a man who cheats in elections and runs concentration camps on the border. A man whose racism has inspired a wave of terrorist violence, including in my hometown of El Paso, Texas.

To be sure, my partner and I had already, for the sake of our sanity, given up visiting relatives back in Texas for the holidays. Getting to my mother's place in rural Texas is a nightmare at normal times — a flight to Dallas, followed by a smaller plane to a four-gate airport, and then driving an hour and a half to her house — and during the holidays it's pretty much hell on earth. The one time we've made the trek after moving  to the East Coast, a snowstorm grounded our flight for four days, and we ended up renting a car and drive from Cincinnati all the way to New York. After that, we told our families that we loved them, but we would be celebrating Christmas from the safety of our own home.

But now the part about "celebrating" has fallen off over the past few years. It seems a little silly to make a big thing out of a holiday that just reminds me how my own family and so many other people in America have been sucked up into the Trump cult. I'd rather just read a book or binge-watch some TV.

Family is a touchy subject and the spirit of communal joy seems like a joke. The only thing left is the materialism of the season. Which, to be fair, seems to be going full force. The pull of capitalism is such that, unless you can plead poverty, the annual round of gift exchanges will go on no matter how much the nation appears to be collapsing around us. Gift baskets, I have discovered, are the saving grace of the person who has to put the bare minimum into Christmas but whose heart is not in it. And unlike the  often baffling gifts people give you when they try to guess at what you might like, getting a box of cookies is usually pretty welcome.

I can sense the shaming, criticism and condescension coming my way, let me be clear: I am not a joyless person. On the contrary, I'm a lucky and even privileged person, who gets to have a lot of fun in her life.

It's just that Christmas isn't fun for me anymore. It's a sad reminder that we are not the country we pretend to be when we sing songs about love and joy at this supposedly wonderful time of the year.

The good news is there's still Thanksgiving, thanks to some dear friends who have an annual party featuring communal generosity, not to mention a spirit of fun that eludes me in the family-oriented Christmas holiday. For those of us who have been alienated from our families in the Trump era, those families you create with friends have become a real lifeline.

As for Christmas, well, for now I'm taking a pass. Call me when we're a country where "God bless us, every one" is something other than a cruel joke.