El Paso is the best of America. No wonder a white nationalist terrorist attacked it

El Paso is the best version of America, which is why Trump heaped hatred on it until a terrorist attacked the city 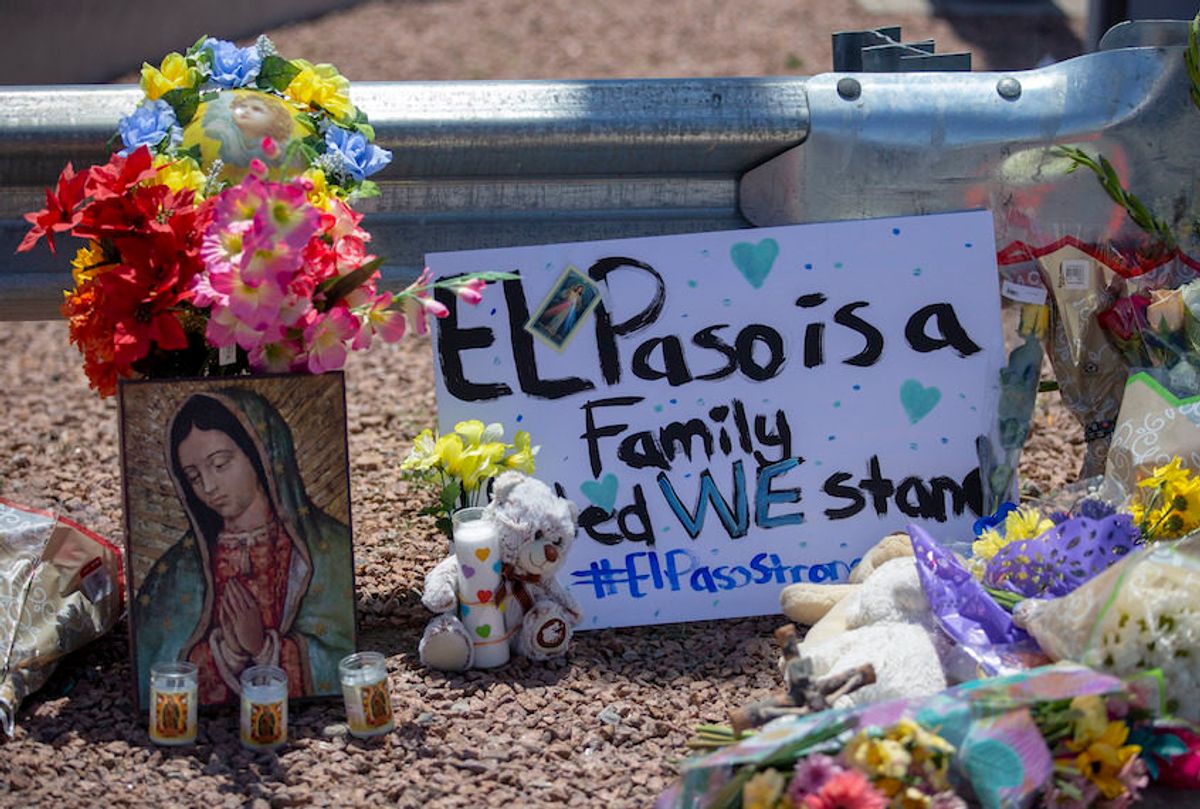 I grew up in the heyday of the shopping mall as the secular church of America. In the '80s and '90s, before the internet ruined malls, these massive shopping centers were a primary destination for family outings and teenage socializing. In my community of east El Paso, we were all of the denomination Cielo Vista, a sprawling behemoth of a shopping center that was one of the few reliable sources of entertainment in our relatively dull west Texas city.

We did everything there as kids, from movies to Santa photo ops to ear piercings to trick-or-treating to shopping trips with older relatives. Adolescence was the same: Weekends at Cielo Vista, attempting to relieve boredom by seeing if Claire's and Sam Goody's had refreshed their stock from the week before.

Cielo Vista Mall was, until Saturday, the backdrop of innumerable childhood and adolescent memories. Now it's yet another site of horror and trauma in the ongoing carnage of American mass shootings.

El Paso was my home growing up, a place that felt as normal and unremarkable to me as a pair of well-worn sneakers. But in the eyes of many Americans, including Donald Trump, El Paso is something else entirely. The city, which borders the much larger city of Ciudad Juárez and has a population that is 83% Latino, is a symbol of everything they hate and fear.

And because of that hate and fear, there are 20 people dead, dozens more injured and a place I have, until now, thought of strictly in terms of the pleasant normalcy of growing up in America is rewritten as a site of white nationalist terrorism.

For months now, Trump has exploited El Paso to generate racist propaganda meant to rile up his base and win the 2020 election. Under his leadership, the Border Patrol keeps stuffing migrants into cages and concentration camps, and Fox News uses the images both to drum up racist fears and illustrate Trump's claims to be "tough" on immigration. Trump even had one of his proto-fascist rallies in El Paso in February, drumming up false fears over the shared border with Juárez.

In a way, it was inevitable that El Paso would be targeted by one of the internet-molded young fascists. The suspect, currently in custody, is thought to be the author of an 8chan post, published right before the shooting, that echoes Trump's racist rhetoric and fear-mongering about Mexico and immigration. No doubt millions of Trump's supporters see El Paso through the same racist lens the shooter did, one provided by their beloved president and the white nationalist propaganda streaming of Fox News.

If only I could get into their heads and make them see that the very thing they hate about my childhood home, its bicultural nature, is the very thing that made it so special a place to grow up. We didn't necessarily see it as special; rather, it was normal. As a kid, it never occurred to me that other American kids didn't grow up with piñatas for birthdays and tamales for Christmas Eve and enchiladas for special occasions. It wasn't until I was older that I found out that it was unusual in many parts of America to hear people speaking Spanish or that most Americans do not rate Santana as a Hendrix-level rock god.

I did not know my home was "scary" or "foreign" or the front line in what a president would one day call an "invasion." It was just my home. I still think of myself as a desert girl, happy standing on a hill watching the explosive reds and purples of the sun setting in the big sky over the twin cities of El Paso and Juárez sprawled out in the mountain valley.

It's a rare vantage point in El Paso where the border between the two is visible to the eye: When you look out over the cities, it's just one mass of humanity, as far as the eye can see.

It is so big and it is so hard for me to see how the small eyes of bigots can reduce it to the hate that Trump spews forth, hate that led inexorably to murder.

To be certain, El Paso was not idyllic. The racism there is complex and, for outsiders, downright confusing. My grandfather was happy to lay down roots there because it helped him reconnect with Mexico, which he had missed since immigrating to the U.S. as a teen. But we are also a bunch of gueros — or Anglos, if you wish to be polite — and so far too many family members of mine have backed Trump and, though they would strenuously deny it, his message of white supremacy.

No one doubts less than me that the vitriol about immigration over the southern border is about making America white, which is why folks like me or my family — or like Bret Stephens or Mitt Romney — are never told to "go back" by Trump or his chanting rally crowds. And unfortunately, that is also why I have no real hope that this shooting will be a wake-up call to Republican voters about the evils they enabling. Already, the propaganda troops are spread out on cable news, offering ridiculous rationalizations and excuses, no matter how thin, to allow Trump voters to tell themselves they are totally innocent in this, and that their enthusiasm for his racist politics somehow has no relationship to the surge in hate crimes swamping this country.

This idea — that communities like El Paso are somehow less authentically American than whiter or more conservative places — is unfortunately a bit of poison that has spread even to the minds of those who should know better. Look, for instance, at the recent Twitter gaffe of New York Times editor Jonathan Weisman, who tweeted and then deleted a comment suggesting that Atlanta and Austin were somehow less authentically Georgian and Texan than the rest of the state. It's why the media continues to obsess over the votes of rural and suburban white people to the exclusion of covering what literally any other kinds of voters care about.

But as sentimental as it might be, when I imagine the best of America, what I want it to be, I think often of El Paso. It epitomizes the cultural exchange that actually created what we think of as "America," which is always morphing and changing and improving as different people from different parts of the world bring cool new ideas and aesthetics to us. I think of Latino hipsters who taught me to love The Cure and The Smiths. I think of the luminarias that dot the sidewalks at Christmastime. I think of the radio station from the '90s that would blast rock en español next to American hits. And I think, of course, of the foods like salsas and enchiladas that used to be unusual outside of our tiny corner of the country but now have become as standard American fare as the hamburger.

Nowhere is more American than El Paso, precisely because it defies the narrow, mean, sad idea of America that is embraced by Trump, his MAGAheads, and white nationalists determined to terrorize. This fear and hatred threatens to swamp us, and this terrorist act is just one more terrible reminder of what that means. There is little doubt that, come 2020, El Paso will reject the agenda of hate at the ballot box, just as they did in 2016. The only question is whether the rest of the country will follow.