The best way to resist Trump? Beto and El Paso show us how it's done

Thanks to Beto O'Rourke and the people of El Paso, Trump's first big rally of 2019 was a bust. Resistance, learn! 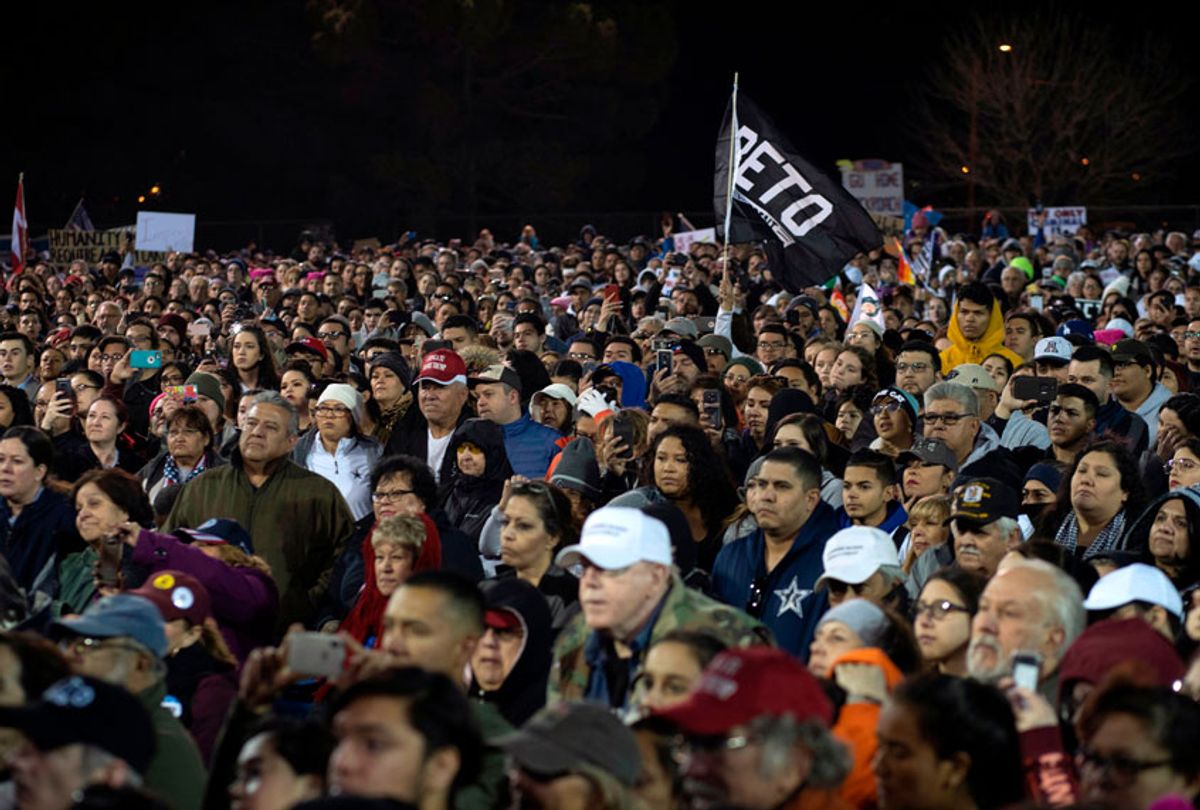 Supporters listen to former Texas Congressman Beto O'Rourke at Chalio Acosta Sports Center at the end of the anti-Trump 'March for Truth' in El Paso, Texas, on February 11, 2019. (Getty/Paul Ratje)
--

There is little doubt in my mind that Donald Trump went to El Paso, Texas, on Monday night hoping to create an ugly scene. Thecity, which shares a border with Ciudad Juárez, Mexico, is about 80 percent Latino and voted for Hillary Clinton over Trump by a whopping 43 points in 2016. With his already impossible border wall plan slipping out of his fingers, his stubbornly high disapproval ratings, and the number of investigations into his corruption multiplying, Trump turned to his old standby -- racist trolling -- in an obvious effort to distract the media and wind up his supporters.

It was a strategy he used to great effect on the campaign trail, most notably at his infamous Chicago rally: Show up in a racially diverse community, prompting protests and generating a number of photographs of white MAGA-hat wearers clashing with largely nonwhite protesters. The pictures are then disseminated across Breitbart, Drudge Report and other right-wing outlets to whip up Trump's base, nurturing their belief that they're "under attack" and their anger at people of color for showing defiance.

Trump's trolling can create a seemingly impossible conundrum for progressives. No one wants Trump to hold his rallies without the community standing up to reject his hate and show that his bigotry will not go unanswered. But how does the resistance speak its mind forcefully, without inadvertently creating photos that will be used to whip up racial resentment?

Well, on Monday night, former Rep. Beto O'Rourke and the fine people of El Paso created an elegant solution that allows progressives to speak out without feeding the Trump propaganda machine: Instead of a protest, hold a counter-rally.

Dubbed the "March for Truth" and organized by more than 50 local groups, the counter-rally did much more than protest the hate fest being held by Trump a few blocks away. It uplifted the city with heartening images showcasing the community of El Paso, and rejecting Trump's efforts to demean border residents with racist stereotypes.

The rally, held outdoors with the lovely desert sky of West Texas as a backdrop, created a compelling counterpoint to the ugliness inside the arena where Trump held his rally. Photos of the handsome, charismatic O'Rourke standing with a diverse crowd of cheerful, determined progressives competed successfully in the news cycle with photos of the Trump rally.

To most Americans' eyes, the progressive rally, which looks almost like a rock concert in some photographs, probably seemed a lot more fun.

Trump tried, of course, to get back on message about how his supporters are being oppressed, eagerly hyping the handful of protesters in the audience who were hauled out by security. But it was clear from the president's speech that the nearby rally was on his mind, as evidenced by the sheer ridiculousness of the lies he told in a pathetic bid to minimize the size and scope of the counter-rally.

In fact, it's likely that the progressive rally was bigger. The El Paso Fire Department said that about 6,500 people attended Trump's rally, and estimates of the counter-rally's size ranged from 7,000 to 15,000 people. Perhaps more importantly, the counter-rally looked more like the community in El Paso, compared to the largely white crowd at the Trump rally.

"Beto O'Rourke gets under Trump's skin in El Paso," reads a headline at NBC News.

"Trump seemed very interested in Beto O'Rourke's evidently larger crowd during his El Paso rally," according to a post at The Week.

Even though many outlets, especially Politico, tried to cram the story into their horse-race model — "Beto O’Rourke finally looks like a 2020 candidate" read the headline — the framing still makes clear that the counter-rally successfully hijacked the media narrative. Trump isn't used to that, and undoubtedly hates it.

Progressives need to pay close attention to this success story. There's little doubt that the backbone of Trump's campaign for 2020 will be his big rallies, which are always meant to be culturally divisive and racially provocative. Trump thrives on sowing distrust and racial animus, winning over voters who may not like him but are vulnerable to propaganda attacks that frame white people as victims of "political correctness." Any images of direct conflict between protesters and the MAGA-hat faithful will be repurposed for this cause.

Counter-rallies, on the other hand, help send a message of rejecting hate and embracing diversity without feeding the Trump propaganda machine.

Not incidentally, this fits the Southern Poverty Law Center's recommendations when it comes to dealing with white supremacist rallies. The racial justice groups tends to recommend counter-rallies instead of direct and confrontational protest, because white supremacists are eager use the latter to hype the idea that white people are under attack from people of color. Counter-rallies also reduce the chances of violent conflict.

To see Donald Trump takes a page out of a book written by the KKK and other white supremacists — hold a racist rally and then play the victim when progressive, anti-racist protesters show up — isn't surprising. The white nationalist movement's influence on Trump has been extensively documented, and he has deployed that movement's major talking points on many occasions, including his recent State of the Union address.

This creates unique challenges for progressives going into the 2020 elections. It's not just the very real danger that Trump will successfully use racist messaging to eke out a marginal electoral victory once again. It's also that in doing so, he will continue to mainstream white nationalist views that used to hide on the fringes of American society.

We've already seen the effects of this, in the surge of hate crimes in this country as Trump ascended to power. As this president and his supporters get angrier and more desperate, things are likely to get worse. So it's critically important for progressives to counter Trump's hate rallies in a productive fashion.

Granted, O'Rourke and the organizers in El Paso had some tremendous advantages. The majority of El Paso residents despise Trump, making it easier to turn out a big crowd. O'Rourke himself is young, charismatic, and easy on the eyes — and he had the benefit of the beautiful light to make the already appealing photos look better. The 2020 chatter meant that more media attention was going to focus on him.

Still, there's no reason to think this success can't be replicated. Trump's rallies used to get a lot more coverage because they were both novel and alarming. Now they're frankly starting to feel tired, and the anger radiating from his monochromatic crowds is getting wearisome. Reporters are ready to cover something different and new. Counter-rallies create that opportunity, especially if they can be staged in photogenic ways.

Trump's racist message should not be allowed to stand without opposition and resistance. But that resistance can and should come in the form of an alternative narrative, focused on positive energy -- and, yes, even love. On Monday night, El Paso rose up and showed progressives how it's done. It was an example to follow.