Trump and his allies aren't ashamed of images like the bridge in El Paso. They think racist cruelty is a winner 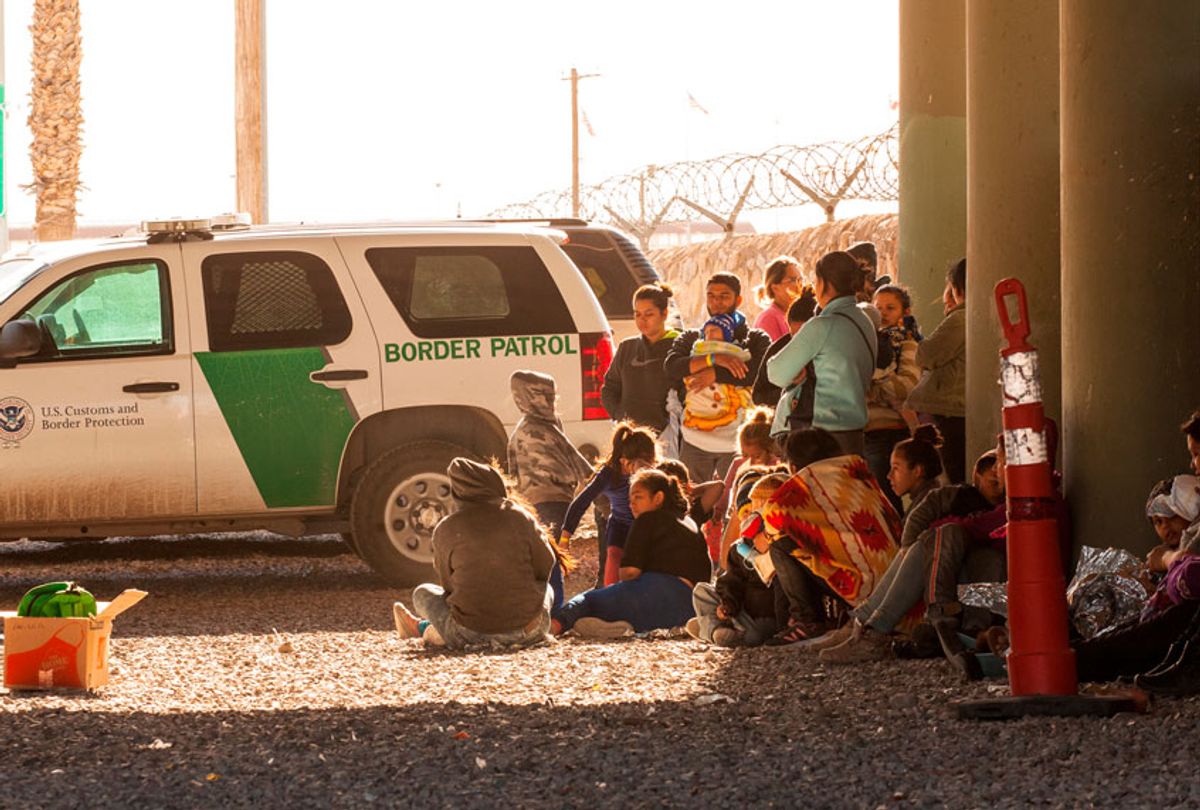 Last week, yet another image capturing the human rights abuses being inflicted by Donald Trump's administration on asylum seekers shot through the national consciousness. A group of migrants, including many families with small children and babies, were being crammed into a holding pen under the Paso del Norte Bridge in El Paso, Texas. They were exposed to the elements and trapped in what looks very much like a concentration camp. Images of babies crying and small children peering out from behind razor wire spread quickly throughout the news, showcasing yet again the human cost of electing a man with overt white nationalist sympathies to the highest office in the land.

But Trump is not embarrassed by these images. On the contrary, there's every indication that the president and his media supporters are flaunting the pictures of babies in cages. As absurd as this might seem to most normal people, it appears that Trump and his propaganda troops are betting that the more images are out there suggesting that the administration is forcing migrants into modern-day concentration camps, the better his chances are of winning re-election in 2020.

The coverage pattern around the holding pen is the first big clue. After a Washington Post reporter first tweeted images of the families crammed in a cage on March 27, CNN aired one segment on the situation and MSNBC aired three. But, as researchers at Media Matters found, Fox News aired a whopping 10 segments on the cage in the span of two days.

The spin offered by Fox News is that the cages were evidence of the supposed "invasion" that Trump is always prattling on about, trying to paint the thousands of people escaping violence in Central America as some kind of conquering army. While the images clearly showed people who were scared, cold and tired, Fox News pundits repeatedly told viewers that they were scary and violent, with one news anchor worrying "about people getting angry, people losing their patience, and things getting out of control quickly."

This coverage reflected the propaganda coming from Trump's Border Patrol chief, Kevin McAleenan, who also used the El Paso camp as evidence of this supposed invasion, telling reporters that it was the result of migration across the southern border reaching a "breaking point."

It's true that there's been an increase in the number of families crossing the border to seek political asylum, but McAleenan's hysterics should be taken with a grain of salt, especially since it's Trump's own policies that have exacerbated the situation. Draconian and punitive border management policies are actually encouraging people to cross illegally, rather than coming through ports of entry. The administration is also trying to cut back on the number of immigration judges, which will only slow down the asylum process further and cause more backlogs.

Frankly, the timing of the El Paso cage is suspicious, to say the least. It was erected just a few blocks away from where former Rep. Beto O'Rourke held his presidential campaign's kick-off rally, drawing in national reporters with large audiences. Shortly after O'Rourke's rally ended, Border Patrol officials shut down the holding pen, and it's not clear where all the people who detained there have gone. The Guardian has reported that some of them, perhaps most, were simply set free.

One church volunteer who has been helping refugees told the Guardian, "I think it’s being done by Trump’s people, as a way of increasing the chaos."

El Paso's congresswoman, Rep. Veronica Escobar, was more cautious about ascribing intent, but said Sunday that it was "very difficult not to be suspicious of the timing," given that the Border Patrol didn't prepare ahead of time "for what we all knew would be an increase in asylum-seekers with the arrival of warm weather."

Whether the timing was coincidental or not, there can be no doubt that Trump believes that highlighting his racism-fueled cruelty towards migrants is the sort of thing that will excite voters and get them out to the polls to support him in 2020.

At a rally in Michigan last week, Trump mocked asylum seekers, claiming they've been coached to say they're afraid for their life, and telling the audience that it's "a big fat con job." (This is more obvious projection from a man who has spent his life as a shameless grifter.

"Our detention areas are maxed out & we will take no more illegals. Next step is to close the Border!" Trump tweeted on Saturday, helping McAleenan and Fox News in pushing the idea that the caged families were visual evidence of this supposed "invasion."

(Not only is the word "illegals" equivalent to a racial slur at this point, it's also false. The migrants currently being detained are mostly people seeking to apply for political asylum, which is legal.)

But while the administration claims to believe that the country is being "swamped" by asylum seekers, its actual policy choices show little interest in reducing the number of people who feel compelled to leave Honduras, Guatemala and El Salvador. On the contrary, the administration is  cutting aid that those countries use to fight gang violence.

As Salon's Sophia Tesfaye notes, this "all but guarantee[s] that the flow of asylum seekers becomes a flood," since fear of uncontrolled crime and gang violence is the major reason people are fleeing those countries in the first place.

But why should the Trump administration care? The Fox News coverage, the tweets, the vicious rhetoric at rallies: It all suggests that Trump believes thinks that his best bet for re-election is to scare aging white conservative voters into believing there's an "invasion" at the southern border. Viewed in that light, having more refugees, more arrests of people crossing illegally and, above all, more images of kids in cages is not a negative at all. So it shouldn't be a surprise that his administration is pursuing policies likely to lead to more chaos and suffering at the border. It'ss all grist for the Trump propaganda mill.

To make the whole situation worse, the only thing that excites the Trump base as much as racist cruelty is opportunities to "trigger the liberals." So while exposing the human rights abuses and expressing outrage is of course a legitimate reaction, doing so only causes Trump supporters to become more loyal to their sadistic leader, who is so good at provoking "liberal tears."

But ignoring this problem is no solution, either. These are real human beings being abused to satisfy the whims of racist leaders.

Our best hope is that Trump's wrong about how many voters he can move with this cruelty. He eked out a win in 2016 by mobilizing enough fearful people to win a few key states while losing the overall popular vote. But back then, his racism was more an abstraction and therefore seemed less threatening. Maybe now that people see the results, there will be more mobilization on the left than there was in 2016. Until then, there's good reason to worry that Trump will keep finding ways to put more kids in cages.