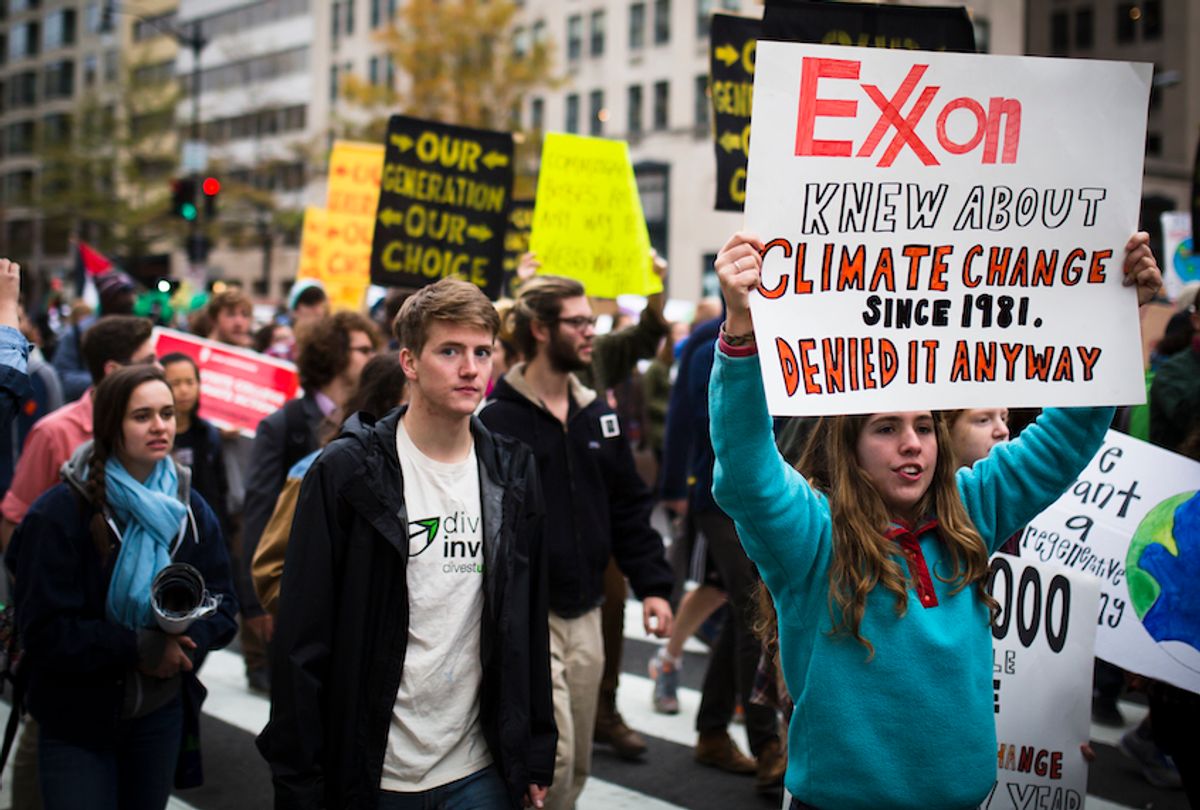 For some, climate change is a theoretical crisis looming in the distance. But for many coastal and island cities, the damage is here.

Last week, the Honolulu city council voted unanimously to file a lawsuit against ExxonMobil, Chevron, British Petroleum, Shell and other oil companies for their role in warming the planet. The city is following in the footsteps of more than a dozen others, including Baltimore, Boulder, Colorado; and Santa Cruz, California, along with some counties and states, in suing fossil fuel companies over climate change.

“We are already feeling the impacts of climate change and having to spend city money to adapt our infrastructure,” says Honolulu’s Chief Resilience Officer Josh Stanbro, citing as examples beach erosion and increased flooding. “We want to make sure the costs are born by the industry that created them.”

Hundreds of other complaints have been filed by environmental groups, activists and even some fishermen. Depending on the outcome, the rising tide of litigation could represent an important new front in the fight to limit the harm from climate change, and force energy companies to foot the bill for measures to address it.

But against the staunch opposition of energy companies, it’s not at all clear the tactic will succeed.

“These misguided lawsuits will do literally nothing to address climate change and are nothing more than an opportunity for politicians and activists to score political points and for trial lawyers to win big paydays if they succeed,” says Spencer Walrath, research director at Energy In Depth, a project of the Independent Petroleum Association of America, in an email.

Other critics contend that climate policy should not be determined in the courts. “These lawsuits are examples of what we call ‘regulation through litigation,’ ” according to an email from Tiger Joyce, president of the American Tort Reform Association, a Washington-based group that seeks to limit lawsuits against for big companies, including energy producers. “Our courts exist to resolve disputes, not to solve society’s most significant and complex problems,” he said.

But others contend that climate campaigners have little choice but to turn to the courts.

“Ideally, Congress would be taking aggressive action,“ says Michael Gerrard, a law professor and director of the Sabin Center for Climate Change Law at Columbia University, which tracks climate-related lawsuits on a database.  “But it’s not. The frustration on the part of the environmental community about legislative inaction is sparking litigation.”

Along with targeting energy companies, some of the lawsuits seek to force government regulators to act. Perhaps the most prominent was the action filed by 12 states and several cities to force the Environmental Protection Agency to regulate greenhouse gas emissions under the Clean Air Act. The EPA balked, claiming it lacked authority to act. In 2007, the Supreme Court rejected the EPA’s assertion, ruling 5-4 in favor of the states.

Although the Trump administration has chipped away at enforcement — for example, by weakening restrictions on methane, a potent climate-warming gas — the decision acted as a sort of bugle call for other cities and states to sue both the federal government and fossil fuel companies.

Still, a number of climate-related lawsuits have been dismissed on various grounds.  In 2011, the Supreme Court ruled, 8-0, that a group of six states couldn’t sue five power companies because their greenhouse gas emissions were a matter for the EPA. A suit by the Native Village of Kivalina against ExxonMobil was later thrown out for similar reasons. And last year, the city of New York’s lawsuit against ExxonMobil was tossed outby a judge who ruled that the problem of global warming demanded a political solution.

Separately, New York state sued ExxonMobil for securities fraud, claiming that the oil giant, having long known about climate change, defrauded investors by downplaying the risks to the company from climate regulation. A three-week trial ended earlier this month,  and the judge is expected to reach a decision before the end of the year. ExxonMobil officials did not respond to a request for comment.

Other lawsuits filed against ExxonMobil and other companies allege that they engaged in a disinformation campaign aimed at deceiving the general public and swaying government officials. One frequently cited 1998 memo  from the American Petroleum Institute, a leading trade group,  read in part: “Victory will be achieved when… average citizens ‘understand’ (recognize) uncertainties in climate science.”

Some advocates see the pattern as reminiscent of tobacco industry obfuscation about the risks of cigarette smoking, and cite lawsuits against tobacco companies as inspiration for suing oil companies.

Other plaintiffs have taken aim at state and federal governments over their alleged inaction. The furthest advanced of these suits is Juliana vs. United States. Filed in 2015 on behalf of 21 people, then-aged 8 to 19, the complaint argues that by failing to act to reduce greenhouse gas emissions, the EPA and other federal agencies are violating the Constitution’s protection of life and liberty.  “Defendants have known of the unusually dangerous risks of harm to human life, liberty, and property that would be caused by continued fossil fuel burning,” the complaint reads. “Instead, Defendants have willfully ignored this impending harm.”

The case is currently awaiting a decision by the Ninth Circuit Court of Appeals on whether it can proceed to trial.

“The conservative majority on the Supreme Court will probably quash the Juliana case eventually,” says Robert Percival, director of the climate law program at the University of Maryland. “But it’s possible you’ll see some victories in some of the state court suits.”

The Juliana suit was filed by attorneys working for the non-profit Our Children’s Trust, which has filed similar lawsuits on behalf of youthful plaintiffs against all 50 state governments. Many have been thrown out, but actions in nine states are still pending, with a decision expected soon by the Supreme Court of Alaska on whether that case can proceed to trial.

Hundreds of climate suits have also been filed in 28 other countries, including 98 cases in Australia, according to Gerrard of the Sabin Center at Columbia. A suit in the Netherlands would force the Dutch government to cut greenhouse gas emissions by 25 percent below 1990 levels.

"Climate change is certainly an all-hands-on-deck issue,” says Josh Stanbro of Honolulu. “You need a mix of tools and policies."

The city’s lawsuit “is not going to stop global warming from happening. It is only going to offset the cost being born by taxpayers. This is purely to adapt to the new climate reality we face as an island community.”