Tom Friedman, Bret Stephens and the rest of Bloomberg's fanboys don't want to talk about his real record in NYC

Former New York Mayor Michael Bloomberg’s entrance into the crowded presidential race hasn’t caused big changes in polling for the top three Democratic candidates Joe Biden, Elizabeth Warren and Bernie Sanders. It has, however, brought a number of media cheerleaders for the city’s richest resident out of the woodwork.

In the New York Post (11/9/19), columnist Michael Goodwin said that Bloomberg’s record of raising “student test scores, creating jobs and cutting crime,” while being liberal on “abortion, climate change and gun control,” is the kind of sensible centrism needed to counter the “militant class warfare” he sees in candidates like Warren, who he called an “Occupy Wall Street brat.” 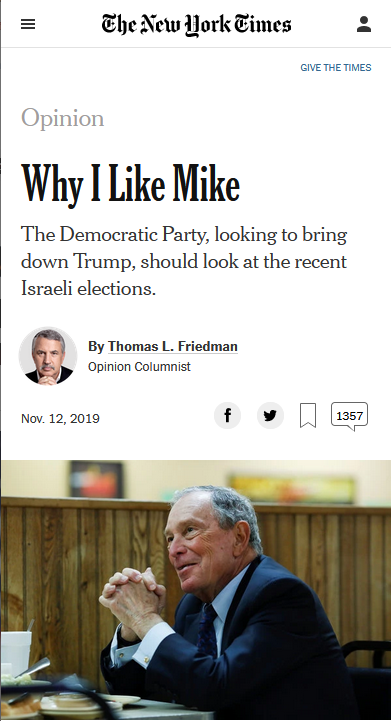 In the New York Times (11/12/19), Thomas Friedman yammered on about Israeli politics before he celebrated Bloomberg as an industrialist, which he described as a more virtuous form of making billions of dollars than investing or trading, and claimed that Bloomberg would be well-positioned to address inequality, because doing so requires “celebrating and growing entrepreneurs and entrepreneurship — and fostering a culture of accountability, lifelong learning and self-motivation.”

The right’s charge-sheet against today’s Democrats is that they hate capitalism, hate Israel, hate the cops, think of America as a land of iniquity, and never met a tax or regulation they didn’t love. Against Bloomberg it all falls flat.

At the New York Daily News (11/13/19), contributor Judi Zirin scoffed at anti-billionaire zealotry, saying it was Bloomberg’s business acumen that allowed him to turn the city’s “budget deficit into a huge surplus.”

There’s a clear theme emerging: In a world where Sanders and Warren are moving the Overton window to the left on economic issues, and Republicans are lockstep behind a white nationalist incumbent, a new pro-business centrist is needed to restore sanity to our discourse. In a world where it’s fun to hate billionaires, a money-maker who gives to nice causes, hates guns and supports environmentalism is the person who can give capitalism a good name again.

Better yet, Bloomberg, at least on the surface, appears to be a kind of tough, successful executive, of both a major company and the nation’s largest city, in a Democratic field dominated either by legislators or candidates with smaller-town executive experience. (Sanders was mayor of Burlington, Vermont, for example.)

But if the media are going to celebrate Bloomberg’s achievements as a private and public executive, they  need to address his baggage in those roles as well. The media crowing for Bloomberg’s sensible executive skills leave out several notable scandals during his mayoralty.

The CityTime scandal, which federal Judge George Daniels called “the largest city corruption scandal in decades,” was a 2011 debacle in which digitizing the city’s payroll system resulted in ballooning costs and the conviction of three contractors for bilking the city. Unions had rallied against the system, but Bloomberg, who oversaw and championed the overhaul, pressed on. 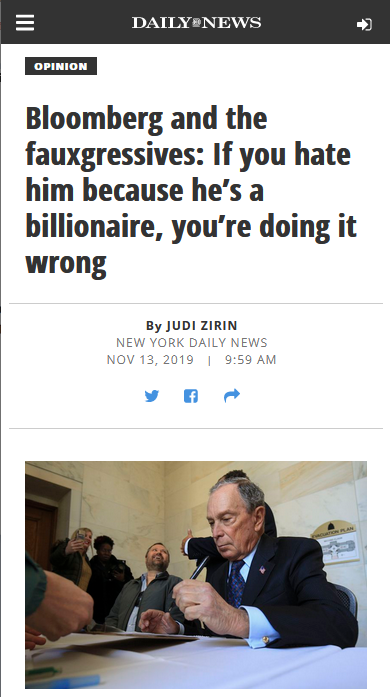 As longtime city reporter (and Salon contributor) Bob Hennelly noted on WNYC (6/29/11), even though Bloomberg never faced prosecution in the mess, this was his responsibility:

The irony here is rich. “The massive scheme” started as an outsourced city contract to design a payroll system that would precisely track the hours worked by city employees. After a couple of false starts with other vendors, defense contractor Scientific Applications International Corporation was awarded the job in a no-bid contract by the Giuliani Administration.

Under Mayor Bloomberg, the contract ballooned from $63 million where it had started out in the Giuliani years , to more than $700 million. Federal prosecutors now say at least $600 million of that was “tainted.” At every level, federal prosecutors allege grafters had honeycombed CityTime into a paragon of corruption.

Daily News columnist Juan Gonzalez, one of the main journalists to focus on the ripoff, called it the “biggest scandal of the entire Bloomberg era” (Democracy Now!, 12/23/10). But the late investigative journalist Wayne Barrett, in the now-defunct Village Voice (7/22/09), proposed another contender for that title: the deadly Deutsche Bank fire in Lower Manhattan, which he argued was a scandal that went up to the highest reaches of city power.

For months, Lower Manhattan residents and worker advocates had raised alarm bells about the controversial simultaneous decontamination and demolition of the former Deutsche Bank Building, which had been badly damaged on 9/11. They alleged that shoddy contracting could endanger the community, but the city pressed on despite these loud objections. On Aug. 18, 2017, faulty construction work led to a fire that killed two firefighters, largely because the contractors had violated construction codes that would have allowed for quicker emergency exits. The incident soured relations between the Lower Manhattan community and the administration, and inflamed tensions between Bloomberg and the firefighter unions.

Then we have Bloomberg’s long record of sexism as a boss, which often seems forgotten. The Washington Examiner (11/11/19):

For instance, a New York Magazine journalist reported that in his time spent with Bloomberg, he degraded women based on their appearance, in one instance ignoring the conversation they were in to gesture at a woman and say, “Look at the ass on her.” The same article recounts a female politician detailing how the mayor shamed her for wearing flats rather than heels and demeaned the gray streaks in her hair.

New York Magazine also reported on a list of “Bloombergisms,” common phrases and quips the mayor used to make. These reportedly included “If women wanted to be appreciated for their brains, they’d go to the library instead of to Bloomingdale’s,” and “I know for a fact that any self-respecting woman who walks past a construction site and doesn’t get a whistle will turn around and walk past again and again until she does get one.”

This matters not just because we live in a world of #MeToo, but if part of the outrage of Donald Trump is that his governance is intertwined with sexism, why is it so different that Bloomberg is similar, just behind closed doors? (Hint: It’s not.) 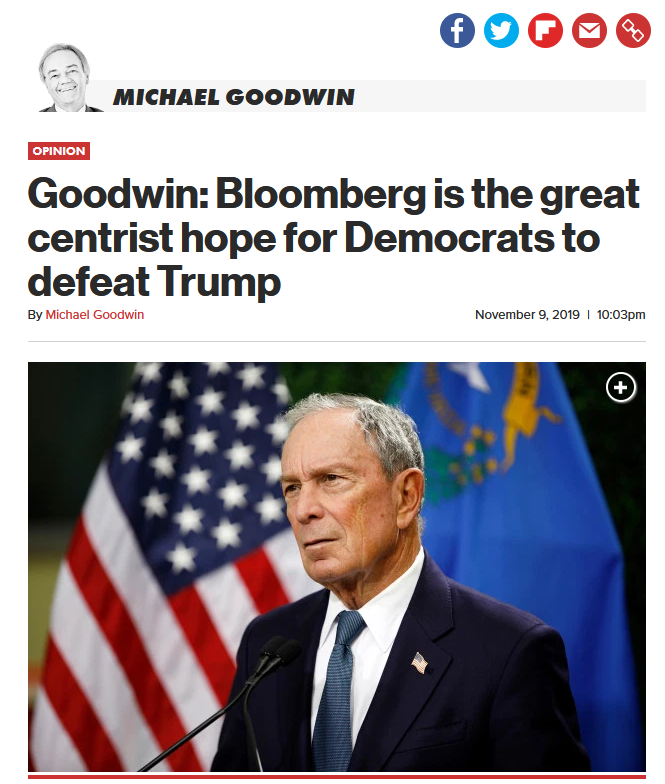 In the New York Post, Michael Goodwin (11/9/19) says Bloomberg “could help save the party from following Sanders or Warren into the political wilderness.”

“As Bloomberg’s New York Prospered, Inequality Flourished Too” (New York Times, 11/9/19) is corporate media’s ambivalent way of acknowledging that Bloomberg’s tenure benefited the few at the expense of the many, with the “growth and prosperity” the Times illustrated with the controversial Atlantic Yards/Barclays Center project in Brooklyn accompanied by increases in rents, gentrification and homelessness.

Finally, elite media celebrating Bloomberg as “our best chance to bring America together again,” as Judge Judy Scheindlin did in a USA Today op-ed (10/16/19), can only do so by downplaying the severity of the harm done by his eager expansion of the NYPD’s racist and unconstitutional stop-and-frisk program. Charles Blow (New York Times, 11/10/19) used his column to denounce as a “non-negotiable deal breaker” Bloomberg’s support for the scheme, which targeted black and Latino males as young as 13, making their routine harassment and humiliation “just a fact of life in New York” (New York Times, 11/17/19). But news articles and profiles still prevaricate, like the Times explainer (11/17/19) that referred to stop-and-frisk as a “crime-prevention strategy,” though it acknowledged that research revealed the stops no more successful at finding weapons than simple chance, and the city’s crime rate famously declined with the program’s phaseout.

Bloomberg defended stop and frisk up until it “emerged as a vulnerability for him on the campaign trail,” and his “apology” (“Our focus was on saving lives”) rings false.

Put it all together and you have a pretty good picture of the kind of executive Bloomberg was: the kind who would tolerate criminal negligence and excessive waste, all to make some absurd point about workplace efficiency. The kind who led an administration whose obsession with thrift and lack of appreciation for safety near the World Trade Center contributed to the needless deaths of two of New York’s Bravest.

All of this had an effect on real New Yorkers, especially working-class, and in the case of policing, non-white New Yorkers. That narrative often gets left out of the narrative that he’s a “get things done” type who can run the U.S. government like a successful business.

For Bloomberg’s cheerleaders in the press, the reality of his record as a governing executive is left out of their case that he’s the one to cure the nation of populism across the political spectrum. This is shoddy journalism, even if it’s partisan and on the opinion pages, largely because none of these things are secrets — these are stories that were doggedly covered by city reporters at the time.

These omissions show just how out of touch the punditry around Bloomberg is — not just with regular New Yorkers, but with journalism itself.