Trump is destroying what commanders call "good order and discipline." It's malicious, stupid and destructive 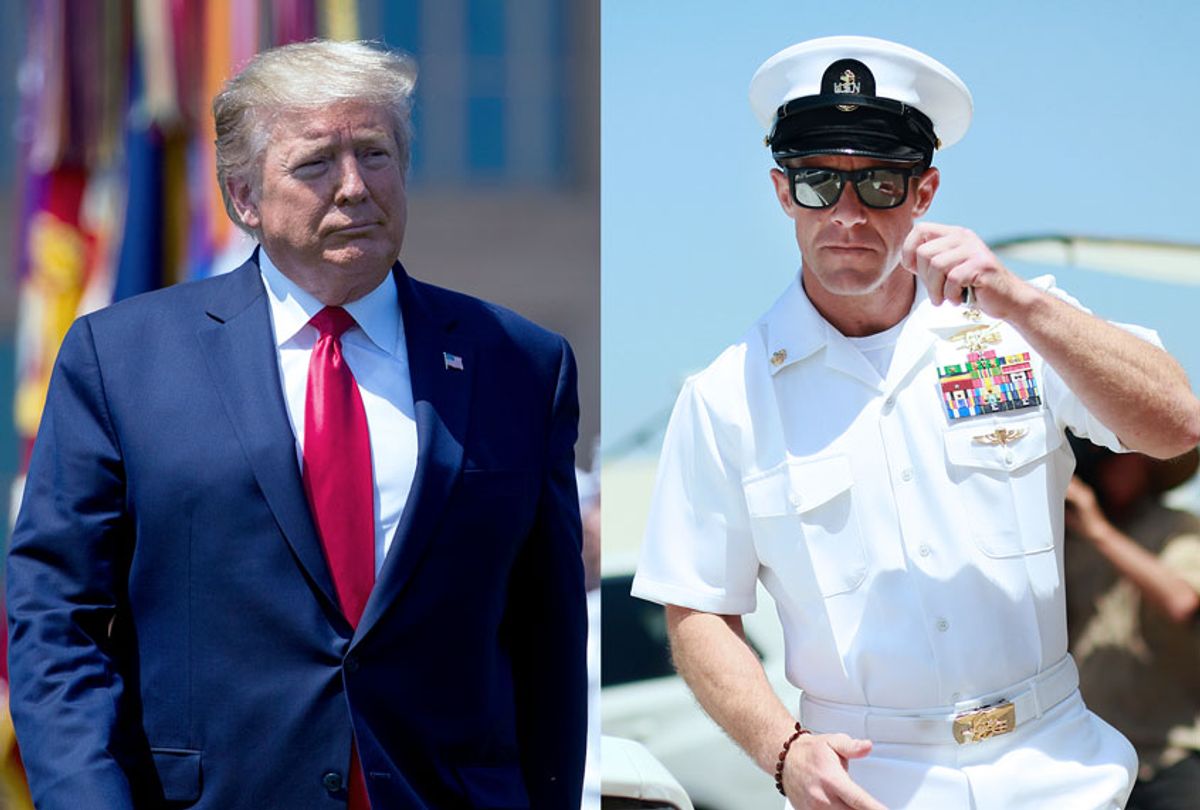 Let me tell you why it’s so dangerous for Donald Trump to pardon or otherwise excuse war criminals. Because it makes the enforcement of lesser laws and regulations in the military much more difficult.

Trump has no idea what he’s dealing with in the military. The population on an average army post, say, isn’t like the population of the civilian town just outside the gates. To begin with, everyone on the army post is a trained killer. It doesn’t matter if a soldier is a front-line infantryman or a clerk in the division finance office or a wrench-twister in a motor pool or an information technology specialist or a quartermaster handing out olive drab underwear. Every single one of them went through basic training and qualified on a modern military rifle like the M-4, and many of them qualified on more weapons, like the 9mm pistol or the M-240 machine gun or the M-2 .50-caliber machine gun or the 81mm mortar.

Here is what military weapons training is intended to do. It makes soldiers comfortable around deadly weapons and gives them the ability to shoot them effectively without having to think about it. That’s who you’re dealing with if you are put in charge of soldiers in a platoon or a company or a battalion or a brigade. You’re dealing with a bunch of people who have gone through training that rewards aggression and gives them the skills to exercise it effectively.

The problem faced by military commanders has always been the same: to harness the aggression and killing skills of soldiers while maintaining what they call “good order and discipline.” It’s not easy. The primary way this is accomplished is with training. Training hones soldiers’ skills while instilling in them an instinct to follow orders and maintain discipline. It also builds esprit de corps and what they call “unit cohesion.”

This is the instinct of soldiers within a unit to stick together and look out for one another and to follow the rules set down for them by their leaders. It’s a good part of what makes a unit an effective fighting force. Training produces disciplined soldiers without emphasizing rules that are written down and codified in law. It’s part of the whole thing about acting without having to think about it. Soldiers shouldn’t have to walk around thinking about the rules of warfare as written down in the Geneva Conventions. Their training should give them the discipline and confidence to act on the battlefield without worrying that they’re doing the right thing. They simply do it because they were trained to act lawfully. It becomes instinctual, automatic. When trained right, soldiers end up with a sense of pride in themselves and their unit. This is why when you see veterans, you’ll often see them display their unit insignia, like the “Screaming Eagle” of the 101st Airborne Division, or the crossed bayonets of the 10th Mountain Division, or the arched “tab” reading “RANGER,” which signifies training at the elite Ranger School.

Donald Trump has driven a stake into the heart of this system, which has been carefully developed and maintained by the military for decades, if not centuries. He did it when he began what amounts to his celebration of war criminals by pardoning Michael Behenna, an army officer who in 2008 stripped an Iraqi prisoner naked and shot him to death and then claimed he had been attacked by the naked prisoner and was protecting himself. When Trump issued that pardon in May, he was celebrated on Fox News and lobbied by supporters of other war criminals.

On Nov. 15, Trump pardoned Mathew Goldseyn, an army major who had been charged with executing a suspected Afghan bomb maker who had been captured and was being held as a prisoner of war. The same day, Trump pardoned Clint Lorance, a former army first lieutenant who had been convicted of ordering his soldiers to shoot and kill three men on a motorcycle in Afghanistan in 2012. He had been serving a 19- year sentence in the disciplinary barracks at Fort Leavenworth, Kansas. Also on Nov. 15, Trump involved himself in the heavily publicized case of Chief Petty Officer Eddie Gallagher, the Navy Seal who had been charged with stabbing an Iraqi prisoner to death with a hunting knife and shooting two civilians to death with a sniper rifle. Gallagher was eventually convicted of posing for a photograph with the body of the dead Iraqi prisoner. Trump pardoned him for that crime and later ordered that Gallagher be allowed to keep his “Trident” pin, signifying his membership in the Seals. He later fired Secretary of the Navy Richard Spencer for refusing an order to stop a hearing into Gallagher’s case.

Trump issued his pardons on the day Marie Yovanovitch, the former ambassador to Ukraine, gave damaging testimony in the House impeachment hearing on Capitol Hill. It was a naked attempt to change the narrative of the day’s news and to appeal to his bloodthirsty base in the Republican Party. “We train our boys to be killing machines, then prosecute them when they kill!” Trump had tweeted earlier.

It’s not worth discussing how ignorant and self-serving that statement is, coming from a man with five draft deferments, including one for spurious “bone spurs” which seemingly never recurred again in Trump’s life. But it cannot be emphasized enough how dangerous the pardons are that Trump has issued to war criminals, not to mention the way he has celebrated their crimes. It sends a message to the rest of the military that crimes committed while at war won’t be prosecuted, of course. More than that, Trump’s pardons for these war crimes, which included killing prisoners of war in cold blood, make the enforcement of every other regulation and military law that much more difficult.

If these guys are allowed to get away with murder, why should soldiers obey lesser laws? The UCMJ, the Uniform Code of Military Justice, is used to prosecute crimes within the military. But it’s also used to enforce discipline and keep order within units. So-called “Article 15” non-judicial punishments are handed out by commanders for minor infractions of the rules, like being caught speeding or sleeping on guard or failure to keep a barracks room neat and orderly. What’s the motive to obey the little rules and regulations which help to keep order and create effective units if the big rules and laws are not only being ignored, but crimes of murder and mayhem in war are being celebrated by the president of the United States?

The contrast between the way Trump has celebrated war criminals and the way he has trashed real heroes who have served honorably and with valor, like Lt. Col. Alexander Vindman and Ambassador Bill Taylor, couldn’t be more clear. He has made it obvious whose side he's on. He’s a lawless president presiding over a lawless administration, and now he wants the military to fight lawless wars. It’s too bad he can’t be impeached for pardoning war criminals, because these are among the greatest crimes he has committed since taking office. His pardons will cause the deaths of honest, law-abiding soldiers in the wars we fight, As a nation, we will be paying the price of Trump’s pardons for a long time.