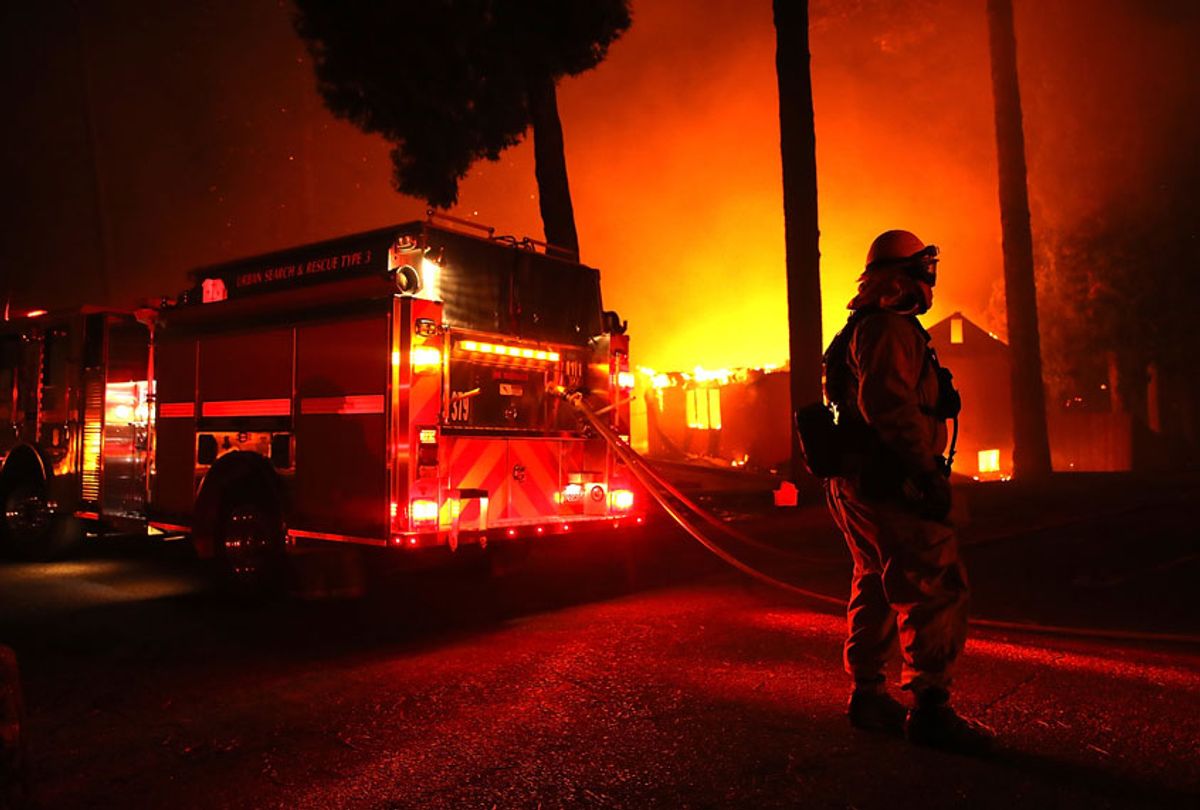 Firefighters try to save a building as the Camp Fire moves through the area on November 8, 2018 in Paradise, California (Getty/Justin Sullivan)
--

We all know that when the power goes out, refrigerators, heaters and air conditioners stop running. Homes go dark, and desktop computers shut down.

But those are mere inconveniences. If you need regular dialysis or chemotherapy at a clinic, or you have an infant in a neonatal intensive care unit or a loved one on a hospital ventilator, a loss of power carries far more dire implications.

California’s recurrent power outages this year by Pacific Gas & Electric Co. and Southern California Edison, in response to wildfire threats up and down the state, have forced patients to think about how they get care when the power is cut at hospitals and clinics.

Hospitals that provide critical care are required by state and federal law to have backup generators on-site. In California, hospitals, outpatient clinics and treatment centers have long-standing disaster plans in place, which cover the possibility of temporary power outages.

“But continuous power shut-offs, sometimes lasting for days and then happening again within a week or two, were never what those plans were intended for,” said Jan Emerson-Shea, vice president for external affairs at the California Hospital Association. “This is all very new to everybody.”

Communities in Northern and Southern California have been subjected this year to numerous outages, often with no assurance of when their power would be restored. The utilities’ estimates sometimes miss the mark. The outages are likely to be a long-term problem, given PG&E’s 10-year timetable for fixing power transmission risks.

And the fires are not necessarily finished for this season: The Camp Fire, the most deadly in California history, started in the second week of November last year. And the Thomas Fire, a huge blaze that ravaged swaths of Ventura and Santa Barbara counties, erupted in early December 2017 and burned well into January.

The bottom line: Hospitals and clinics must be prepared for this new reality. And so must patients. The following answers to some critical questions will help readers understand what patients’ options will be the next time a vital treatment is threatened by a loss of power.

Q: We have a family member on a ventilator in the hospital. What happens to her if the power goes out?

She will likely not be affected. All California hospitals must have backup generators and enough diesel fuel on hand to run for 72 hours without electricity. The generators kick in within 10 seconds of a power shut-off, Emerson-Shea said, so all critical functions — ventilators, heart monitors, surgical procedures — can continue without interruption.

Q: Some recent outages have lasted longer than 72 hours. What happens then?

As long as the hospital has access to diesel fuel, it can run on its generators for as long as it needs to (although air quality issues arise from their prolonged use). But even with generators, hospital administrators must decide which services are absolutely critical and which ones are temporarily dispensable.

Q: What are some examples of both?

If you have elective surgery like a knee replacement scheduled, and power is expected to be cut off that day, there’s a chance the hospital will reschedule the operation. The generators are intended primarily to power the critical-care functions of a hospital — operating and emergency rooms; labor centers; the monitoring of patients’ heart rates, breathing and blood pressure — and officials will keep those functions going even if it means turning off the building’s air conditioning or heat.

Q: I have a chemotherapy treatment scheduled on a day when a power shut-off may occur. Should I still go?

That depends on your provider. Many oncology practices are located within or next to hospitals, so they would retain access to power even in a shut-off. The situation changes, though, if your treatments are normally provided at a free-standing health clinic or private care center, where such backup may not exist. A survey by the disaster-preparedness nonprofit Direct Relief found that only 44% of California’s community health centers have a backup energy source in case of electrical failure.

Q: What do clinics without backup energy do, then, if the power goes out?

Phone calls by California Healthline to several such clinics found that most of them had a similar plan: Staffers use their cellphones to contact each patient and cancel his or her session. So be aware that you may see an unfamiliar incoming number that turns out to be your provider. If someone from your treatment team doesn’t call you, call them. And if your treatment is canceled, make sure it is rescheduled for immediately after power is restored. A few of the facilities noted that their doctors have privileges at local hospitals, so in cases where the treatment is indispensable, they can send patients there. Emerson-Shea said several hospitals have reported receiving patients who had been directed there by clinics.

Q: How bad is it if I miss a chemo or radiation treatment?

In many cases, a delay of a few days won’t hurt you. But missing a session altogether is not good. A study published by the National Institutes of Health showed that missed chemotherapy doses correlated with worse prognoses and higher mortality rates among cancer patients. Missed radiation treatments, likewise, have been linked to a greater risk of cancer recurrence. So it’s important to stay on track.

Q: What about dialysis? If my clinic has no power, can I get treatment elsewhere?

Yes. During mandatory fire-related evacuations in Sonoma County last month, some clinics with no formal affiliation functioned as ad hoc cooperatives, cross-referring their patients depending upon which facilities were up and running, said Monica Hannaman, a dialysis social worker at Fresenius Medical Care in Santa Rosa. The goal was to treat patients without having to send them to a hospital, she said, “because the hospitals are already so burdened during emergencies like that.”

Also, keep in mind that if your dialysis center is part of a bigger chain, you can go to one of its other locations. Some Sonoma County dialysis patients of San Jose-based Satellite Healthcare, which has multiple locations in California, went as far as Sacramento for treatment last month, said Lanie Borja, manager of the Satellite clinic in Windsor, Calif.

Q: What else can health care providers do to ensure my well-being in the likely case of future power outages?

Hospitals may start rethinking ways to store backup energy, Emerson-Shea said, especially given the long time PG&E has said it will take before it can stop the precautionary outages. Some free-standing medical clinics in areas with high fire and wind risk are considering buying generators large enough to power their operations, despite the big expense. Hannaman said Fresenius is thinking of putting generators in its two Santa Rosa-area clinics, because “this will be happening more often, we’re afraid.”