“I’m done being quiet,” Page says as she speaks out for the first time after years of Trump's "intimidating" abuse 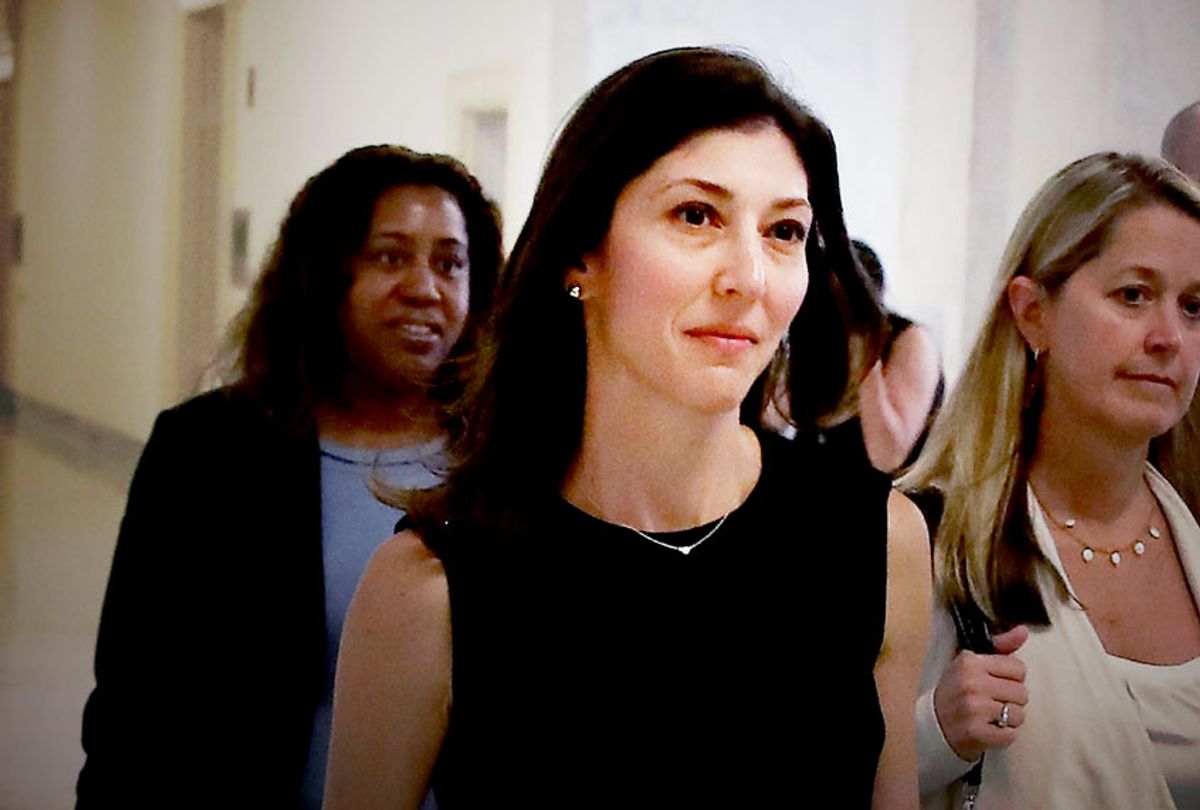 Former FBI lawyer Lisa Page broke her silence to respond to years of President Donald Trump’s attacks after he invoked her while acting out a fake orgasm at a Minnesota rally earlier this year.

Page, whose text messages with former top FBI counterintelligence agent Peter Strzok were used by Trump and his allies to fuel a conspiracy theory of a “deep state” coup, spoke out for the first time in an interview published Sunday by The Daily Beast.

“I’m done being quiet,” she wrote in her first-ever tweet.

“Honestly, his demeaning fake orgasm was really the straw that broke the camel’s back,” she told The Daily Beast. “I had stayed quiet for years hoping it would fade away, but instead it got worse. It had been so hard not to defend myself — to let people who hate me control the narrative. I decided to take my power back.”

Page was referring to Trump’s reading of an exchange between Page at Strzok, in which he repeatedly cried out, “Lisa! Oh, Lisa! I love you, Lisa!”

She spoke out ahead of the release of the Justice Department inspector general’s report on the Russia investigation, which is expected to debunk many of Trump’s claims about the FBI’s investigation into his campaign’s ties to Russia. The report is expected to exonerate Page and other FBI officials of allegations that an anti-Trump bias impacted the opening of the probe.

“While it would be nice to have the IG confirm publicly that my personal opinions had absolutely no bearing on the course of the Russia investigations,” she told the outlet, “I don’t kid myself that the fact will matter very much for a lot of people. The president has a very loud megaphone.”

Page said that it was “almost impossible to describe” what it is like to be attacked by the president on a regular basis.

“It's like being punched in the gut. My heart drops to my stomach when I realize he has tweeted about me again. The president of the United States is calling me names to the entire world. He’s demeaning me and my career. It’s sickening,” she said. “But it's also very intimidating, because he’s still the president of the United States. And when the president accuses you of treason by name, despite the fact that I know there's no fathomable way that I have committed any crime at all — let alone treason — he's still somebody in a position to actually do something about that — to try to further destroy my life. It never goes away or stops, even when he’s not publicly attacking me.”

Page said the rhetoric has caused her to “wince” when someone makes eye contact with her in public and “walk the other way” when she sees someone in a red “MAGA hat.”

Page, who stepped down from her position at the FBI in 2018, first joined the Justice Department in 2006 where she worked as a federal prosecutor before being hired for a “new special counsel-type position” in 2013 where she worked with top officials on the response to the Boston Marathon bombing and the Edward Snowden leaks, according to The Daily Beast. She later became special counsel to former FBI Deputy Director Andrew McCabe shortly before the investigation into former Secretary of State Hillary Clinton’s personal email server and then the Russia probe.

Page disputed that there was anything improper in the FBI’s handling of either investigation.

“We were very deliberate and conservative about who we first opened on because we recognized how sensitive a situation it was,” Page told The Daily Beast. “So the prospect that we were spying on the campaign or even investigating candidate Trump himself is just false. That’s not what we were doing.”

Page said that Trump’s firing of then-FBI Director James Comey changed the nature of the probe.

“It was horrible . . . It jolted the ranks and the investigation. It was so abrupt,” she recalled. “Yes, it was totally within the authority of the president, but it was unprecedented and unimaginable, given the circumstances. The president fired him with the knowledge that, of course, we were investigating Russian contacts with his campaign. I mean, it just gave the aura of an obstructive effort.”

“I don't have the first clue what they're talking about. What I do know is that my text messages will reveal that I had previously had an affair,” she told the outlet. “I’m overwhelmed by dread and embarrassment at the prospect that OIG investigators, Andy [McCabe] and my colleagues now know or could learn about this deeply personal secret.”

Page said in the interview that she does not believe anything in the text messages was improper, and despite being a federal employee, “I retain my First Amendment rights.” The Inspector General’s office assured Page that the affair was off-limits in its review of the messages, she said, but the affair quickly leaked out in media reports when the investigation was made public.

“So now I have to deal with the aftermath of having the most wrong thing I’ve ever done in my life become public, and that’s when I become the source of the president’s personal mockery and insults,” she told The Daily Beast. "Because before this moment in time, there’s not a person outside of my small legal community who knows who I am or what I do."

The scandal was made worse, Page said, when Justice Department spokeswoman Sarah Flores called reporters to “provide a cherry-picked selection of my text messages to review” ahead of then-Deputy Attorney General Rod Rosenstein’s testimony to Congress.

“Those texts were selected for their political impact,” she said. "They lack a lot of context. Many of them aren’t even about him or me."

Page left the FBI in May of 2018, calling the environment at the time “very inhospitable.”

Despite trying to put the events behind her, Page told the outlet that she and her husband still have to live with the fallout more than 18 months later.

“I wouldn’t even call it PTSD, because it's not over. It’s ongoing. It’s not a historical event that is being relived. It just keeps happening,” she said. “I mean, he tweeted about me four days ago . . . Not to mention, you know, his truly reprehensible, degrading stunt at his rally, in which he used my name to simulate an orgasm. And I don’t ever know when the president’s going to attack next. And when it happens, it can still sort of upend my day. You don’t really get used to it.”

Page said the most painful part of her experience was not just how the Justice Department and the FBI abandoned her but rather that they have failed to fulfill “the critical obligation that they have to speak truth to power.”

“It’s particularly devastating to be betrayed by an organization I still care about so deeply,” she said. “And it’s crushing to see the noble Justice Department — my Justice Department, the place I grew up in — feel like it’s abandoned its principles of truth and independence.”