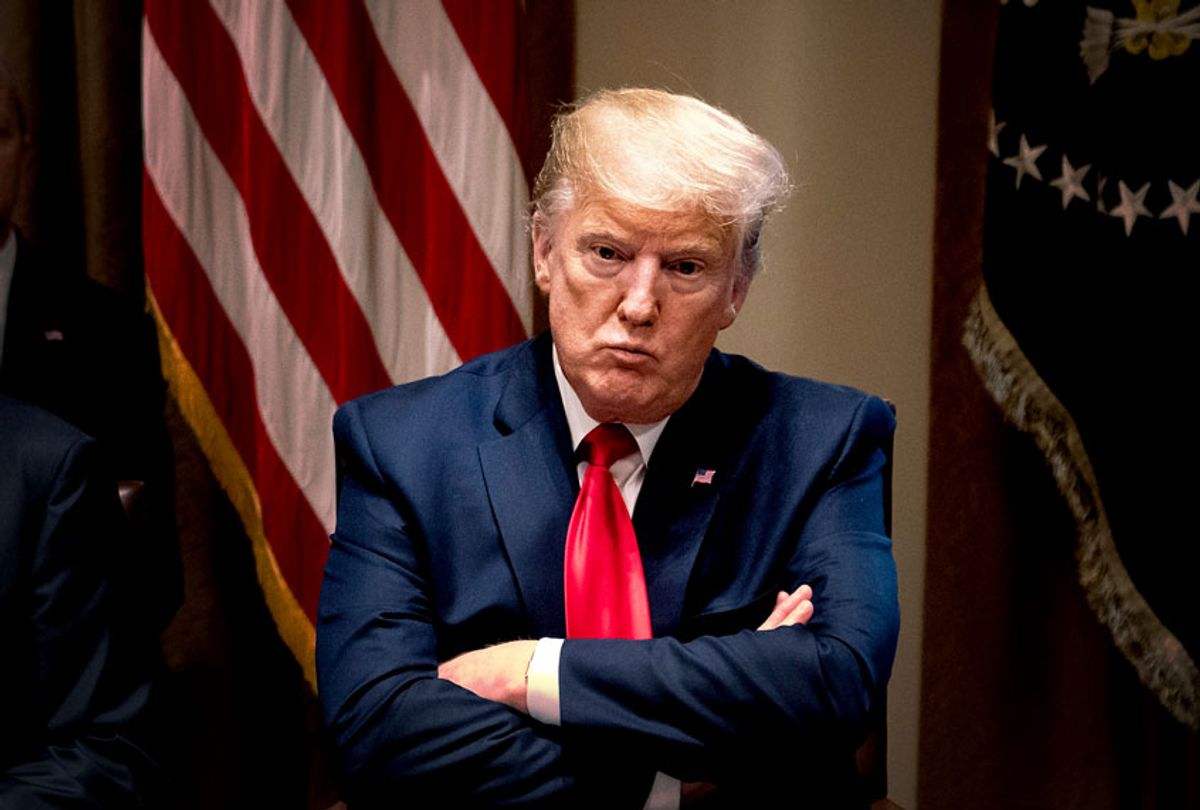 Detailing a long list of complaints which allegedly deny the president "any semblance of a fair process," lawyers for President Donald Trump said Sunday that they would not participate in the House Judiciary Committee's first public impeachment hearing on Wednesday.

The panel's chairman, Rep. Jerry Nadler, D-N.Y, had given the White House until 6 p.m. ET Sunday to inform the committee whether Trump or his lawyers would attend the hearing, where a panel of legal experts are set to discuss whether the president committed impeachable offenses.

"We cannot fairly be expected to participate in a hearing while the witnesses are yet to be named and while it remains unclear whether the Judiciary Committee will afford the president a fair process through additional hearings," White House counsel Pat Cipollone wrote in a five-page letter to Nadler, arguing that "an invitation to an academic discussion" would not "provide the president with any semblance of a fair process."

"Under the current circumstances, we do not intend to participate in your Wednesday hearing," Cipollone added.

Four constitutional scholars — three chosen by Democrats, one by Republicans — are expected to testify at Wednesday's hearing on the standards for impeachment and whether the allegations against Trump meet the threshold of "high crimes and misdemeanors" outlined in the U.S. Constitution.

The administration's response suggests that it will remain on the offensive against the impeachment inquiry, which the president and his Republican allies have called "deranged" and a "witch hunt."

Cipollone did not rule out participating in future hearings, saying in his letter Sunday that the White House "fully reserves the right to respond further" if Nadler releases more information about the committee's Wednesday hearing.

He also echoed a complaint that the president has noted about the timing of the first hearing: It will overlap with the president's appearance at the NATO summit in London. (Cipollone alleged that the timing was "no doubt purposely" arranged to coincide with the overseas trip.)

"You have given no information regarding your plans, set arbitrary deadlines and then demanded a response — all to create the false appearance of providing the president some rudimentary process," Cipollone wrote.

House Democrats are investigating whether Trump abused his office by soliciting Ukraine to open investigations that would implicate his domestic political rivals and boost his re-election campaign. They have alleged that Trump tied a White House meeting and military aid for Ukraine to pressure the country's president, Volodymyr Zelensky, to probe former Vice President Joe Biden, one of the frontrunners for the Democratic presidential nomination, and his son, Hunter Biden. House Democrats have argued that Trump's communications with Zelensky amount to a "quid pro quo."

Congressional Democrats have so far defended their process, arguing that Trump is being given opportunities to defend himself and that the White House should not have blocked current and former administration officials from testifying, as well as relevant documents from lawmakers.

Speaking on "Fox News Sunday," Rep. Doug Collins, R-Ga., the top Republican on the Judiciary panel, said he understood why the White House would not want to participate in a hearing — it is "just another rerun."

"We've already had constitutional scholars in the committee talking about — from the Mueller report and others — is there an impeachable offense?" Collins said. "This is a complete American waste of time right here."

Rep. Tom McClintock, R-Calif., a member of the Judiciary Committee, said on "This Week" that he thought it "would be to the president's advantage" to have counsel participate in the upcoming hearings. "But I can also understand how he is upset at the illegitimate process that we saw unfold in the Intelligence Committee," he added.

The president took to Twitter on Monday to question the fairness of Wednesday's scheduled hearing.

"The Do Nothing Democrats get 3 Constitutional lawyers for their Impeachment hoax (they will need them!), the Republicans get one. Oh, that sounds fair!" Trump tweeted.

In the past, however, Trump has claimed that he would like to participate in the impeachment inquiry. He claimed late last month that he would "love" for current and former administration officials to testify in the probe, but he claimed that the White House was preventing them from doing so in order to protect future presidents.

"The D.C. Wolves and Fake News Media are reading far too much into people being forced by Courts to testify before Congress," Trump said in a tweet on Nov. 26. "I am fighting for future Presidents and the Office of the President. Other than that, I would actually like people to testify."