There's no "one weird trick" to get conservatives to vote for Democrats. So forget it 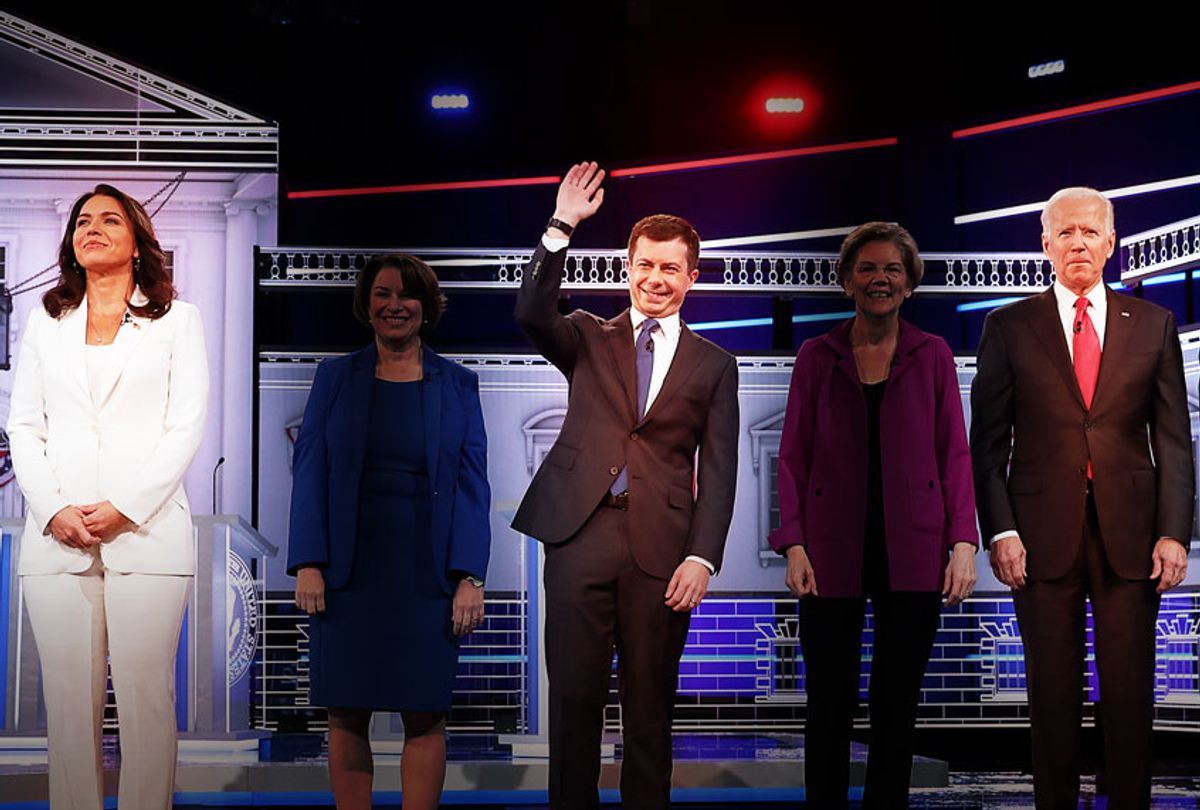 Over the weekend, New York Times readers who were flipping through the opinion pages while trying to recover from Thursday's over-indulgences were greeted with the latest spin on the question that obsesses the Beltway press: How can Democrats get conservative voters to abandon Donald Trump and vote for them instead?

This latest offering, by sociologists Robb Willer and Jan Voelkel, does improve on most such articles, which tend to recommend that Democrats abandon their commitments to social justice and a fairer economy in order to snag moderate voters and disaffected Republicans. (The argument is rarely phrased that way, of course. Instead these opinion writers lash out at the straw men of "political correctness" and "socialism" —  views no major presidential candidate, even Sen. Bernie Sanders of Vermont, actually express.)

Instead, Willer and Voelkel argue that the key to winning over conservative voters lies not in abandoning "progressive economic policies" but in a rhetorical shift towards "the invocation of conservative ideology and values like patriotism, family and the 'American dream.'"

Their argument is simple enough: A lot of Republican-leaning voters aren't conservative economically, but are easily wowed by "symbolic politics." Candidates who align themselves symbolically with conservatism by saying lots stuff about "family values" and waving the flag hard enough will win over conservatives. The candidate they single out as the guy who can get the job done is Mayor Pete Buttigieg, "who pairs invocations of freedom, military security and religious faith with a progressive platform."

Where's the proof? Well, these researchers ran a contained study that measured support for a hypothetical candidate after subjects read excerpts from his fictional speeches. They found that conservative and moderate voters felt more warmly towards the hypothetical candidate if he said stuff about how families are "sacred" and about his plans to "restore the American dream."

Sounds great, right? Just sprinkle in some conservative-friendly buzzwords into speeches and voilà! Watch those previously Republican voters come out for your candidate in droves. It's so easy that one has to wonder why nobody ever thought of this before.

Well, turns out at least one person did: Hillary Clinton. Take her speech at the 2016 Democratic National Convention, where she talked about how she fights for a country where "families are strong" and "communities are safe" and a "country where all our children can dream, and those dreams are within reach." Where she talked about how Americans "have the most powerful military" and the "most innovative entrepreneurs."

Also, here's someone else: Clinton's "democratic socialist" primary opponent from 2016, the aforementioned Bernie Sanders. In announcing his 2020 candidacy, Sanders waxed poetic about both his family and the American dream, saying that his "mother’s dream was that someday our family would move out of that rent-controlled apartment to a home of our own" and mentioning his "role model of a father" who immigrated to America "to start a new and better life." He also spoke eloquently of protecting veterans in the name of "patriotism."

Oh yeah, and then there's Sen. Elizabeth Warren of Massachusetts, who got the Working Families Party endorsement in large part because she frames her economic progressive agenda in terms of what is good for families and her plan "to put the American Dream within reach for America’s families." Warren also talks up her own "patriotic family," with three brothers who served in the military, and uses that framework to argue that her policies represent true patriotism, as opposed to the ideology of corporations that "have no loyalty or allegiance to America."

It's easy to go on, but you get the picture: Democrats always talk up family values, patriotism, freedom and other apple-pie values, and always have. This notion that they don't, all too often mindlessly parroted by mainstream pundits and op-ed writers like Willer and Voelkel, comes straight from right-wing media figures who claim, falsely, that Democrats don't believe in these things. Love of country and love of family are universal values, not conservative values. As the blogger tristero at Hullabaloo points out, the "American dream" is "an explicitly liberal dream" that is threatened mainly by conservatives who shut down opportunities for working people to challenge the power of inherited wealth.

It's easy to see the allure of believing that a rhetorical trick could manipulate conservative voters into switching their votes. After all, many Republican voters, especially from the fabled white working class, are voting against their economic self-interest. A widespread liberal assumption holds that conservative voters do so because they have been manipulated by right-wing propaganda outlets, mainly Fox News, into viewing Democrats as America-hating radicals. So it's tempting to believe that they could easily be manipulated into voting for Democrats with a little ostentatious patriotism.

Call it the "If Republicans can manipulate those voters, why can't we?" strategy. It sounds good. It's also misguided, for a couple of reasons.

First off, it is certainly true that huge swaths of Republican voters are so soaked in right-wing propaganda that it's affecting their ability to think. Study after study shows that Fox News viewers are both less informed and more likely to vote Republican than people who get news from virtually any other source. Anyone who has seen a parent or other loved one start inhaling large doses of Fox News can attest that the effect is real and terrifying.

That's also why it's naive to think that a few rhetorical shifts would be enough to overcome this propaganda blitz. A Democratic candidate could start wearing suits made out of the American flag and singing songs about Old Glory instead of giving speeches, and Fox News would still convince its viewers that candidate is a baby-killing communist who wants to genocide the white race.

After all, right-wing propaganda is powerful enough to convince legitimate sociologists who seem to want Democrats to win that Democrats never talk about family or the flag. If these social scientists with fancy degrees are so easily snookered by the Fox News worldview, good luck getting through to people who are more invested in it.

Just as important, what studies like the one conducted by Willer and Voelkel fail to take into consideration is the social context that drives so much Republican voting. That social context is the biggest reason why it doesn't make sense to compare the results of a lab experiment to what happens in the real world.

Conservative-leaning voters in a study run by academics are going to guess, with some accuracy, that the people running the study put a high value on academic values like empiricism and open-mindedness. Under the circumstances, it's no wonder that some study participants are inclined to appear more open-minded than they actually are. Their answers, even if unconsciously, are likely to reflect that desire to be thought well of by the researchers.

But once the conservative-leaning voter leaves the lab, their social context changes drastically. Instead of trying to look good for researchers, many conservatives, especially in rural and suburban areas, return to communities where there's intense stigma against being open-minded towards liberals. Essentially, these are communities where it's taboo to say nice things about Democrats or engage with their ideas, let alone consider voting for one.

"It’s hard to overstate the small-town social pressure to conform," Larry Womack wrote last month in an insightful piece for the British newspaper The Independent, noting that even if "[s]upporting a Democrat might mean a better standard of living," it "will also come at a personal cost."

Conservative voters aren't going to be suckered by more conservative framing because those frames aren't actually what motivates them. In the conservative world, talk about family and the flag is coded language for other ideas that are generally not spoken out loud. "Family" is code for patriarchy. "Patriotism" is often code for white supremacy — which is why conservatives decided that it was somehow unpatriotic for Colin Kaepernick to protest police violence against black people. "Freedom" is understood largely as the "freedom" of straight white men to restrict the rights and freedoms of virtually everyone else.

Of course it may be tempting for Democrats to give this advice a go anyway, rationalizing that waving the flag harder and talking up family more can't hurt and might chip off a few wavering Trump voters. But doing so comes at a great opportunity cost. Flag-waving and sentimental talk of family takes up time that could be spent on talking up issues that matter to voters — especially women and people of color — who need to be mobilized and energized if a Democrat has any chance of winning next year's election.

Even worse, trying too hard to sound like a conservative often means succeeding — and causing notoriously fickle Democratic voters to grow suspicious of candidates. This effect is noticeable when it comes to Buttigieg, whose efforts to ape conservative aeshetics have turned off black voters, who understandably worry that such a focus on winning over white, conservative-leaning voters means ignoring their concerns. And no Democrat can possibly be elected president without a strong turnout from black voters.

Ultimately, there's no one weird trick to win over conservative voters. The Democratic nominee — and Democratic candidates in general, up and down the ballot — will have to win this by doing the hard, often thankless work of organizing and campaigning to turn out the vote. Any persuadable Republicans or swing voters out there will most likely be won over by the same things that inspire base voters — passion and authenticity. That's how Barack Obama won in 2008, when most voters saw him as not just liberal in his policies but also in his affect. There are no cheap gimmicks that can substitute for genuine passion and hard work.