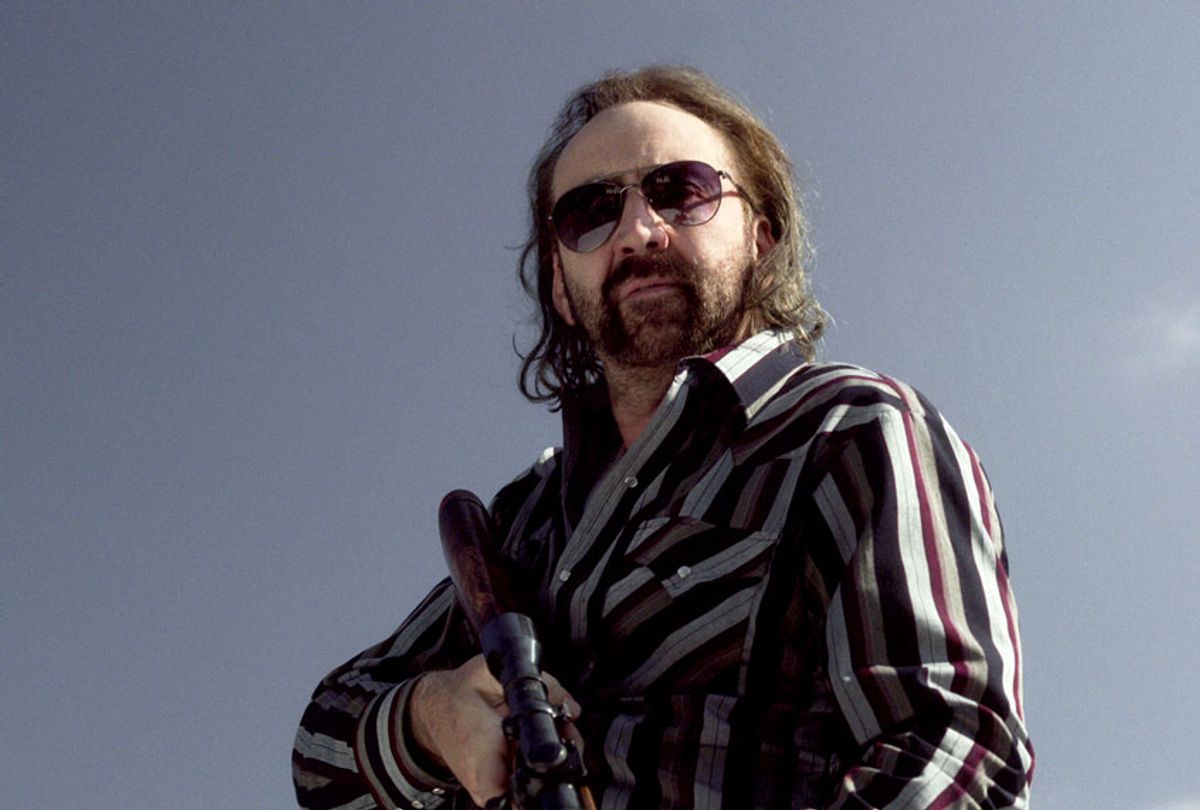 “Grand Isle,” Nicolas Cage’s sixth film this year, opens with shots of dense fog, trees, and a big Louisiana house, cueing viewers that they are entering Southern Gothic territory. And one might think Cage playing a Vietnam Vet with a drinking problem — as he does here — would generate some of his beloved manic scenery chewing. But director Stephen S. Campanelli, never allows Cage to quite go as batshit crazy as his fans want. In fact, Cage seems to be especially lazy; he doesn’t even seem to be consistent with his accent. (In contrast, the hammy Kelsey Grammer, who plays a detective in the film, sport a Southern twang as thick as the aforementioned fog, it is as if he were auditioning for Big Daddy in “Cat on a Hot Tin Roof.”)

This sloppy, low-budget thriller never quite makes its hothouse atmosphere palpable, but it has a serviceable plot that allows for some guilty pleasures.

It is 1988, and Walter (Cage) is awakened by the sound of a burglar in the middle of the night. Keeping a gun and slippers by his bed, he stands his ground and shoots at the intruder, who crashes through his white picket fence. When the drunk, disheveled, cigar-chewing Walter hires Buddy (Luke Benward), a broke father of a sick infant, to repair the fence, Buddy agrees. If he completes the job before the hurricane that’s a-coming, Buddy will be paid extra. (And yes, several people question why one would fix the fence before the storm).

Walter indicates that he doesn’t like this flirtation by standing on his roof with a shotgun, taking out beer bottles he places on the fence not far from where Buddy is working. The hunky handyman shouts, “WTF?!” But viewers will grasp the subtlety of Walter’s message.
When the storm rages, Buddy’s work ends, but his car won’t start. So, he seeks refuge with Walter and Fancy. His muscle shirt is surprisingly more dry than wet when he first enters the house after the rain begins falling — again, blame continuity — and, oddly, his hosts never suggest he get out of those wet clothes. (So much for Southern hospitality). Buddy agrees to wait out the hurricane, and a trap is set. As Fancy prepares mint juleps — because, in a hurricane, what else is there to do but drink? — Walter impolitely asks Buddy, “When was the last time you had your cock sucked?” It would be so great if the skeevy Walter’s question was him actually making an advance on the strapping young man, but alas, that’s Fancy job. She finds Buddy’s crotch with her foot under the table.

“Grand Isle” heads predictably into love triangle mode, getting juicy for a spell. Fancy gives Buddy a tour of the house, where he discovers a locked basement and voodoo dolls, before she seduces him in the film’s most delicious moment: she removes the button of his jeans using the spiked heel of her stiletto. Alas, Walter senses something is afoot, and diverts things by trading war stories with Buddy, talking about ‘Nam and shrapnel, and his squad dying in Da Nang. The scene gives Cage a moment to get all cray-cray, before he offers Buddy $20,000 to kill Fancy, because, well, she’s dying of terminal blood cancer, and he doesn’t want to see her suffer.

Fancy has a big ol’ dark secret herself, which also gets revealed as “Grand Isle” lumbers towards its obvious conclusion, and Buddy pits Walter and Fancy against each other hoping to come out on top.

It is disappointing that this flimsy B-movie isn’t better, because once it sets up its formulaic plot, it could have been both naughty and wild. Fancy and Buddy have an intimate scene when he catches her taking a bubble bath and singing “Strange Fruit,” while drinking wine. Their kiss in this scene indicates some of the pent-up passions these lonely and married-to-others characters feel. But “Grand Isle” skimps on providing a sex scene. Instead, there is a brief post-coital moment where the nude lovers get up and dressed. Why build up the sexual tension if you ain’t gonna show any sex?

The murdering-the-wife subplot also feels like a cheat. Besides being ludicrous (in a good-bad way), the action that transpires when Walter urges Buddy to kill Fancy is badly executed and edited. There are no real thrills here, and there also doesn’t seem to be much at stake.

Most of “Grand Isle” unfolds as the arrested for murder Buddy recounts “what happened” to Detective Jones (Grammer). Jones goes on about faith and sin and he doesn’t believe Buddy, who maintains he is innocent. Viewers won’t much care if Buddy is guilty. It could almost be ironic fun if he was punished for a crime he didn’t commit, or if he gets away with murder. But “Grand Isle” is — spoiler alert — never that clever.

Cage does not seem to be having any fun in his role, which is another reason the film is disappointing. Even when he is slumming, Cage can inject some life into Walter by acting out, but when he lectures Buddy about death and gratitude, it’s a snooze.   At least KaDee Strickland has some verve as the sexpot Fancy. Watching her walk down the stairs in a sheer bathrobe and heels singing Gershwin is amusing, and she is fierce when she uses the business end of a knife on one of the men in the house during a critical moment. Strickland is the best thing in the film because she plays things up but never goes over the top.

As Buddy, Luke Benward is blandly handsome. (Brendan Fraser could have nailed the part back in the day). For all his naivete and cunning, Benward never makes Buddy particularly sympathetic — especially when he insists on going into the basement, rather than escaping the house when he has the chance. Benward should have been smooth and mysterious good ol’ boy, not a chump.

But “Grand Isle” is not about being smart. If it were, it would avoid contrivance. Not bad enough to be fun, nor good enough to be Southern Gothic, this flat film is just painfully mediocre.

"Grand Isle" will be released in theaters and on demand on Friday, Dec. 6.