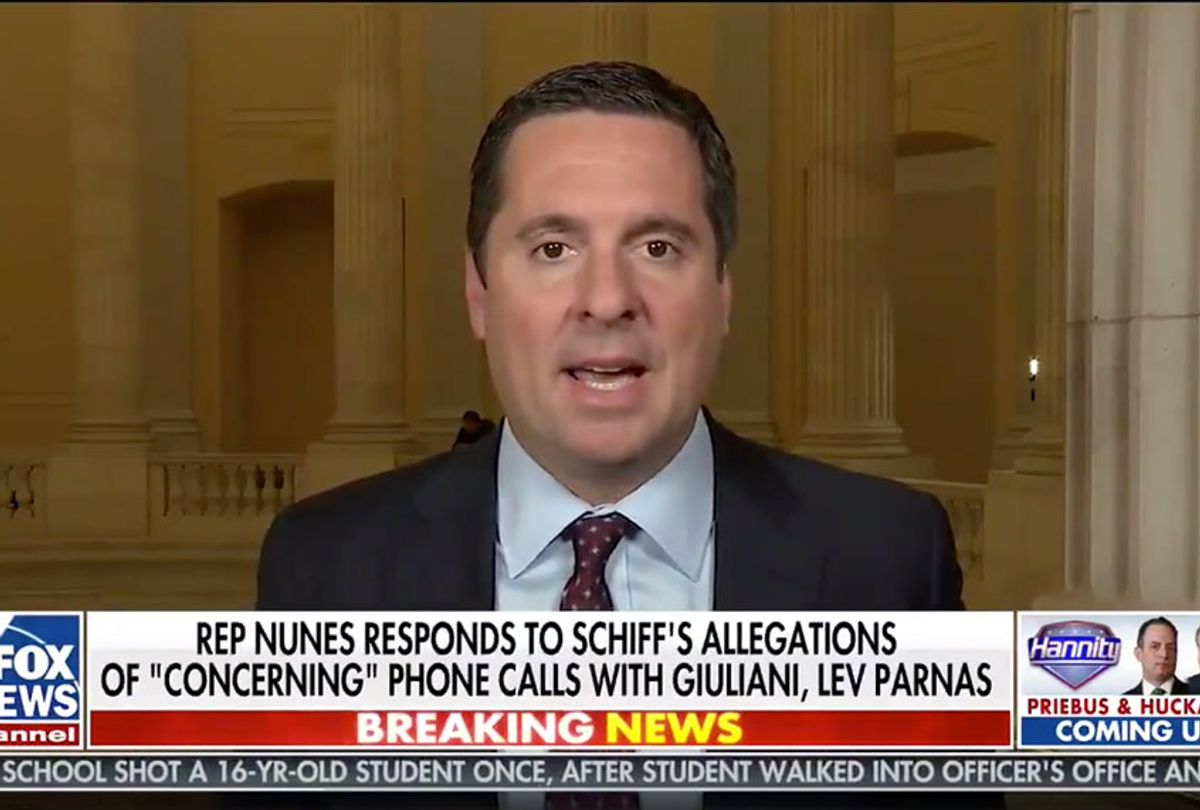 Rep. Devin Nunes, R-Calif., said during a Fox News interview that he could not “recall” speaking with Lev Parnas, an indicted associate of Trump attorney Rudy Giuliani, despite call records released in the House Intelligence Committee’s impeachment report showing numerous phone conversations between the two.

Call logs that apparently obtained from AT&T and included in the endnotes of the report show at least four calls between Parnas and Nunes on April 12, amid the smear campaign against then-Ukraine Ambassador Marie Yovanovitch. Parnas also called The Hill columnist John Solomon, who pushed the false narrative against Yovanovitch at the outlet. The logs also show that Nunes spoke multiple times with Giuliani ahead of those calls. Parnas, who was a key player in Giuliani’s search for damaging information on former Vice President Joe Biden in Ukraine, was later indicted on campaign finance charges.

Nunes, the top Republican on the Intelligence Committee (and its former chairman), appeared on Sean Hannity’s Fox News show after the report’s release to say that he does not “recall” speaking with Parnas.

Asked about the call logs, Nunes said, "I remember talking to Rudy Giuliani, and we were actually laughing about how [Special Counsel Bob] Mueller bombed out.”

"Did you ever talk to this guy Les Parnes [sic], or whoever his name is?" Hannity asked, feigning ignorance even though he was personally involved in the smear campaign against Yovanovitch.

"You know, it's possible, but I haven't gone through all my phone records,” Nunes replied. “I don't really recall that name. But it seems very unlikely that I would be taking calls from random people."

In fact, records show four calls between the two men, including one that lasted longer than eight minutes.

House Minority Leader Kevin McCarthy, R-Calif., said at a news conference on Wednesday that “Nunes has a right to talk to anybody.”

Former FBI acting director Andrew McCabe disputed that point, arguing that while Nunes can speak with whoever he likes, these specific calls raise ethics concerns.

“How could he not know that they have him in these call logs with Parnas? He’s a guy that he vilifies every chance he gets, why is he on the phone with him?” McCabe told CNN. “There’s nothing prohibiting Nunes from having contacts with the president’s lawyer and the president’s now-indicted friend and a very conservative journalist, John Solomon, but it sure does raise a lot of ethical questions about whether or not he should have disclosed that to the committee.”

“It is, I think, deeply concerning that at a time when the president of the U.S. was using the power of his office to dig up dirt on a political rival that there may be evidence that there were members of Congress complicit in that activity,” he said at a news conference on Tuesday.

Parnas’ attorney Joseph Bondy published the call logs on Twitter, writing, “Devin Nunes, you should have recused yourself at the outset” of the impeachment hearings.

Ed McMahon, another attorney for Parnas, told The Daily Beast last month that Parnas also helped arrange overseas meetings and calls for Nunes in 2018, when the then-committee chairman was leading an investigation aimed at undercutting the Mueller probe.

Shokin is the prosecutor at the heart of the Ukraine scandal whose firing was advocated by then-Vice President Biden over corruption allegations. Parnas worked with Giuliani and Shokin to push false allegations against Biden and the false narrative that Ukraine interfered in the 2016 election to help Hillary Clinton.

"Nunes had told Shokin of the urgent need to launch investigations into Burisma, Joe and Hunter Biden, and any purported Ukrainian interference in the 2016 election," Bondy told CNN.

On the same day that his own committee confirmed that he had been in contact with Parnas, Nunes filed a $435 million lawsuit against CNN accusing the network of running a “demonstrably false hit piece” about him.

Nunes told Hannity on Tuesday that CNN “shouldn’t be listening to somebody who’s been indicted,” referring to Parnas, who spoke to Nunes himself multiple times.

"I wasn't in Vienna, and I didn't meet with this guy Shokin,” he said, adding that he has photos of himself in Libya and Malta “at the time frame.”

Bondy, meanwhile, asked a judge on Monday to allow him to turn over phones and electronic devices obtained by federal investigators to Congress in order to comply with a House subpoena, according to The Washington Post.

U.S. Attorney Douglas Zolkind told the judge that the Justice Department would not stop Parnas from turning the materials over to Congress. He added that Parnas is “under investigation for additional crimes.”