Women still belong in the kitchen, according to the advice-seeking men of Reddit 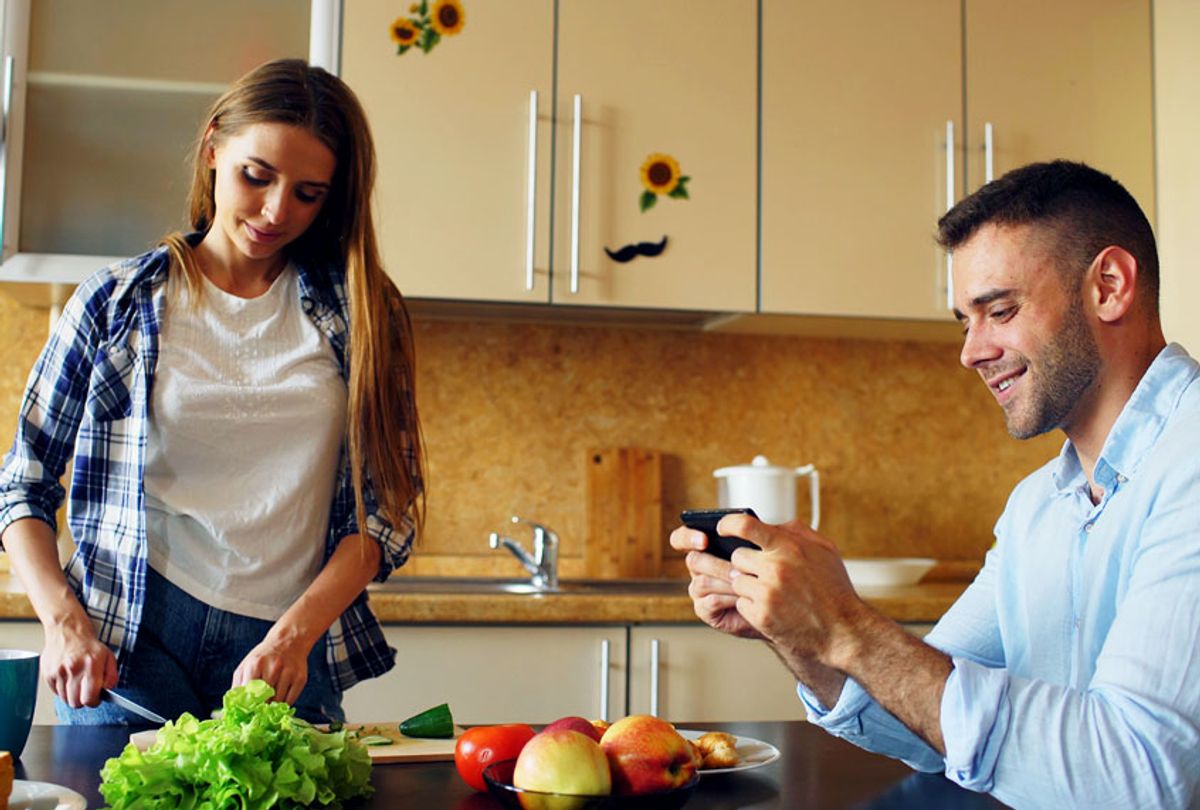 Even by the standards of the Reddit advice-sharing community, the story was a doozy: A poster named AwayPerformer, on the popular "Am I The Asshole" (AITA) subreddit, complained that his neighbor wouldn't cook dinner for him.

After explaining that he's "a 31 year old single guy" who doesn't "know how to cook," Away went on to write that he has noticed that his neighbor, a woman named Katie, cooks frequently and "it always smells amazing."

"So I got the idea that I'd offer to give her some money each week to cook a little extra and bring it over to me," he continues.

Unsurprisingly, Katie said no,  but Away was undeterred, asking "if she was sure" and upping "the amount I was offering," until Katie, realizing that polite deferrals weren't getting the job done, said " I should get a housekeeper if that's what I want."

This story is a rather extreme example, but, as a review/dive down the rabbit hole of Reddit by Salon shows it is part of a larger pattern of users reaching out for advice on how to manage what is still a space ruled by deeply old-fashioned and sexist gender norms: The kitchen. While Americans may claim to believe in equality between the sexes, the advice-seekers on Reddit show that, in far too many homes, women are still expected to take a servile role when it comes to cooking.

(Why Reddit? Well, unlike most advice columns, in which the columnist selects and edits the letters, Reddit is an open forum.)

"When Chris and I were dating he bragged all the time about how well he could cook" and "often cooked for me" to impress her, one woman on r/relationships writes. This attracted her because, "I promised myself I would never end up with a man who refused to cook."

"However we’ve been married for a bit over a year and he completely stopped cooking," she continues forlornly, noting that if she asks him to pitch in, he will "insist on ordering something or warm up left overs" or "just say he’s really tired and beg me to cook."

"I cook 4+ nights a week, the last time he made me anything was a grilled cheese after I had surgery 18 months ago," another woman complains, noting that when she tried to push back, he declared that "he sees my business as a joke" and that justifies expecting her to be his "bang maid."

Over and over from just the past few months, there were variations on the theme: Women having to do it all in the kitchen, while men came up with excuses or otherwise used passive-aggressive behaviors to get out of not just cooking, but also cleaning up afterwards.

(Though one redditor dispensed with the niceties by telling his girlfriend, "I honestly wouldn't mind having a housewife," and that she should do that because while because she is "certainly not stupid but isn't quite on my level.")

But perhaps the most eye-popping example was a redditor who claimed to suffer from "Mageirocophobia - fear of cooking" and therefore was justified in asking his girlfriend if "she could cook for me because I wanted to have some healthy homemade food." Now he is angry that "her friends thought I was sexist," because he is "afraid of using the stove."

This deep dive into the world of advice Reddit isn't just about gawking at people's bad decision-making skills, however. It's a glimpse, however unscientific, into the likely answer for the ongoing question of why it is, despite Americans claiming to believe in gender equality, women are still doing more domestic labor, which means men get to enjoy more leisure time. Yes, even women who are breadwinners do more housework. And married women do more than single women, despite supposedly having a man around to help them.

Often, women are blamed for this state of affairs by conservatives and even liberal men who swear up and down that women "choose" these discrepancies by being more particular about household  management and more interested in domesticity than men.

But what the realms of Reddit show is the opposite: Men are actually quite interested in having neat households and well-cooked meals, and put a lot of pressure on women to provide those things, often to men's exacting standards. And while a lot of women don't like it, they go along because of gendered expectations, or even just not wanting to have conflict with their socially more powerful male partners.

This anecdotal evidence comports with research that shows that while Americans largely support the idea of women's equality in the workplace (though reality leaves much to be desired), research shows that women, not men, are judged lacking if a household isn't being run smoothly. Even among teenagers, the majority of boys — 59 percent — believed that women should have more responsibility at home. (The majority of girls wanted equality in the home.)

Cooking is just a subset of overall housework, but it's one that has more emotional resonance than, say, just cleaning the toilet.

On one hand, cooking is about nurturing people — quite literally — and there are still, obviously,  deeply embedded cultural beliefs that nurturing others is mainly the duty of women. Cooking also features a lot of tedious, repetitive work, from grocery shopping to chopping vegetables, and tedious work tends to be foisted on women, so men can be freed to do more interesting things. (This dynamic is replicated in the workplace, where women are expected to do more of the boring administrative work so men don't have to.)

On the other hand, cooking is also about creativity and mastery — qualities our society tends to associate more with men. Cooking is often pleasurable, to the point where a lot of people treat it as a hobby as much as a domestic chore. We literally have TV shows where people compete to show off cooking skills, something that doesn't happen with toilet-scrubbing. And cooking often means presenting your work to others to admire and evaluate, meaning it's often  emotionally rewarding in a way that other household duties are  not.

No wonder, then, that some of the most painful conflicts reported on the Reddit advice threads involved men who expected women to do all the cooking, but also denied their female partners and relatives the autonomy and creative pleasures of the task. Instead, a lot of Reddit stories were about men trying to control how women cook.

One woman who does all the cooking writes to say her boyfriend claims her foods "make our whole floor smell" and constantly harps that her cooking is boring and stinky. One night "he texted me before coming home from work, saying he wanted carbonara," which she decided not to make, causing him to go off on her, "saying that I’m refusing to learn to adapt to him and that his preferences matter."

Another man wrote in about how he and his girlfriend "came to an agreement that she will do the cooking," an agreement he found suitable because "I was all on board for having a hot meal ready when I come home." But alas, the hot meals are not to his liking and so "I started to give her pointers" and, when his mother came to visit, "I casually said that she could give my girlfriend some cooking advice."

Now his girlfriend "still refuses to make anything food-related at home for me," which he describes as "overreacting."

"He will closely watch what I'm buying, and make suggestions to make it 'more' or 'better,'" a woman complained, noting that no matter what recipe she was making, her partner would follow her around, trying to "helpfully" badger her into completely changing it.

But perhaps the most bone-headed was the redditor who, up top, denies that he is "a sexist asshole," but is mad because his wife, a stay-at-home mother of two, did not think it romantic that he enrolled her "into a couples cooking course with me" as anniversary present, so "she can learn how to cook properly."

What this survey suggests is that the debate over gendered expectations about housework and cooking is about more than the dry statistics showing women do more labor around the house. The losses run deeper than just the time women give up in order to cover men's deficits. After all, plenty of men seem willing to give up their time in order to micromanage a female partner's cooking. (They're also willing and able to cook when it's a "real" paid job in a professional kitchen, a male-dominated realm.) No, the real damage is the harder to measure stuff, the pain that is inflicted on women when they're denied respect and autonomy, and the damage it does to relationships.

And for men who are invested in sexist gender norms, the desire is clearly about more than just getting out of household chores. It's about power — about having your status as superior affirmed by having a partner who doubles as an unpaid servant.

That much was made stark by one redditor who wrote in, who was clearly excited to be engaged to a woman "loves to cook and cares a lot about health so she makes a lot of stuff from scratch that we both eat" and "her place is super nice," while his "a mess."

But when he swung by her place one day " to take some leftovers home for lunches," he discovered — to his outrage — "my gf has a cleaning lady she never told me about."

Readers, he unleashed on her, saying "I felt betrayed" because "i always thought it was great that I was marrying someone super tidy to balance it out" (by which means to clean up after him). And even though she tried to placate him by saying "it frees up more time to cook stuff from scratch," he was furious that she hired someone to do "something she could do herself."

Luckily, the other redditors called him out, saying, "This sounds like you were getting married to get yourself a maid."

But, obviously, it runs deeper than that, as there is no doubt that if a maid is what he wants, he would be happy to let his fiancee keep paying her cleaning lady. No, this isn't just about laziness, but about power. Having the wife who cooks and cleans and caters to a man is the fantasy, and hiring anyone to relieve that duty, even a little bit, takes away the emotional satisfaction.

This guy is an extreme example, but helps illuminate why the cooking and housework wars stubbornly persist, despite decades of pressure from feminists on men to do just a little more work around the house. It's not about the amount of labor. It's about what the labor means. And that's a harder thing to talk about.

Still, there is a silver lining, which is that the Reddit community, while not as fiercely feminist as I might like, tended to pull in the right direction, dunking heavily on men who showed up to complain about women not doing more unpaid labor and commiserating with women who were clearly miserable about being expected to do too much.

"Stop cooking for him. Order out. Microwave frozen meals. Buy sandwich fixens or other absurdly simple, easy to slap together stuff and inform him of where it is located so he can get it himself. If he complains, remind him you've been cooking for him for a year straight. It's his turn," a commenter advised a woman.

"Tell him you need an actual adult partner . . . and mean it," another agreed.