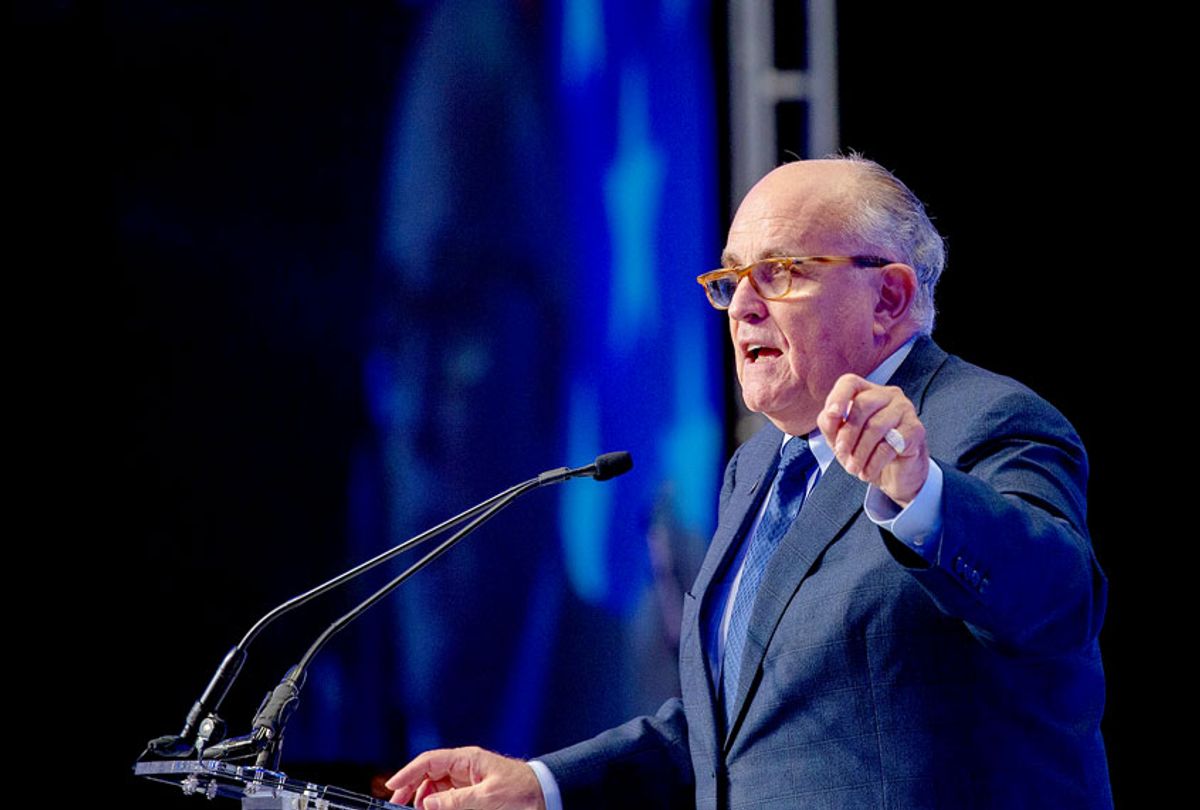 I am not making this up, so fasten your seatbelts belts. It is all downhill from here in the ever-stranger Trump universe.

Moving to the global front pages is a company called Fraud Guarantee. Its co-owners, Ukrainian and U.S. nationals, Lev Parnas and Igor Fruman, have held many meetings at the Washington, D.C. Trump Hotel with Rudy Giuliani, the former mayor of New York city and the real-life version of Alice in Wonderland’s Mad Hatter.

Parnas and Furman have claimed to have had many conversations with President Trump as well and to have given hundreds of thousands of dollars to his 2016 election campaign. They were arrested, holding one-way tickets, at Washington’s Dulles International Airport on their way to Europe.

They have been charged with U.S. campaign finance violations. It remains a mystery where they got the cash to donate to Trump’s campaign coffers, or exactly who was financing their business dealings with Giuliani.

It is increasingly clear that Parnas and Fruman are not the prime targets of a far-reaching investigation pursued by U.S. public prosecutors in New York. They are combing through Giuliani’s many business operations, especially those with Ukrainian and Russian clients.

An eventual prosecution of Rudy Giuliani, the President’s private lawyer, could spell trouble for Trump. Rudy claims that everything he has been doing has been in keeping with his role as Trump’s personal lawyer.

To the suggestion that he is an increasing embarrassment to Trump and may be dumped, he grins and declares that he remains in good standing with the President. Then, as if he has watched too many mafia movies, Giuliani adds, “I have insurance.”

Giuliani has been relentless in his efforts to seek political dirt on former U.S. Vice President Joe Biden, who continues to lead the polls as the potential Democratic Party’s presidential candidate in next year’s elections.

The main locale of Rudy Giuliani’s hunt for dirt has been in Ukraine, aided by his sidekicks Parnas and Fruman. They also claim Biden’s son, Hunter, was involved with a crooked Ukrainian natural gas company and that it was Ukrainians, not Russians, that interfered with U.S. elections.

Some, if not all of Guiliani’s exploits were well known to U.S. Attorney-General William Barr. However, it does not appear that the former New York City mayor ever gave much thought to conflicts of interest that might arise as he acted both as Trump’s private lawyer and on behalf of his own businesses.

In Ukraine, the key person to make up dirt on Biden for a time, until he recanted, was former Ukrainian chief prosecutor Yuri Lutsenko. Giuliani had tempted him to enter into a business contract with Rudy’s private investigations’ company in New York.

The business suggestion made by Giuliani was that, for a fee, he could assist Ukraine in repatriating stolen cash. Partners in this planned deal were a husband-and-wife team of Washington lawyers, Victoria Toensing and Joseph diGenova, with powerful Republican Party connections.

Giuliani says a contract was never signed, although he has acknowledged that he held various meetings with Lutsenko in Ukraine, New York and in Madrid.

As it happens, the latter encounter was at a time when Rudy Giuliani was also meeting there with a client from Venezuela who wanted Rudy to arrange some legal help from the U.S. Justice Department to kill outstanding money laundering charges against him in Florida.

What is unclear so far is what stolen cash Rudy Giuliani and Lutsenko were discussing. Maybe it was the many billions that disappeared in 2014 when then Ukrainian president Viktor Yanukovych fled to Russia?

In that case, the FBI believe a lot of information might be had by interviewing Dmitry Firtash, an old associate of Yanukovych, who has been living in the Austrian capital Vienna for the last few years.

Firtash has been fighting U.S. extradition requests related to international bribery charges that have been brought against him by the U.S. public prosecutor in Chicago. Parnas and Fruman had contacts with Firtash and, at Giuliani’s suggestion, he hired Toensing and diGenova on a $300,000(!) a month retainer to make his case against extradition to the U.S. Justice Department.

But maybe the cash that the Ukrainians were looking for was upwards of $5 billion that disappeared from the reserves of PrivatBank, and led to the nationalization of the institution, and to the sudden departure from Ukraine to Israel of its chief shareholder, Ihor Kolomoisky?

Kolomoisky was the owner of the TV station that screened the comedy show that brought national fame to Zelensky and catapulted him into politics, winning the presidential election last April.

As soon as the election results had come, Parnas and Fruman flew to Israel. They were under instructions from Rudy Giuliani to do a deal under which the banker would use his influence with the new government in Ukraine to see that an investigation was launched to produce dirt on Biden.

Perhaps Parnas and Fruman suggested that in return they would pressure the new Ukrainian government to let Kolomoisky get his bank back. The banker claims that no sooner did he understand what Parnas and Fruman wanted, than he threw them out of his office.

Meanwhile, Rudy Giuliani, who claims that everything he did in Ukraine was supported by Secretary of State Michael Pompeo, was aided in his quests by the “Three Amigos.”

This is not a Mexican restaurant. Rather, it is the name that U.S. Energy Secretary Rick Perry, U.S. Ambassador to the European Union Gordon Sonderland, and U.S. Special ambassador to Ukraine Kurt Volker created to describe their partnership.

You call these people diplomats?

Volker, a career diplomat, has been a partner of the BGR Group for the last six years. It is a major lobbying firm that has represented a range of Saudi Arabian clients, as well as Russia’s Alfa Bank, among many others.

Volker remained on the BGR payroll, while taking no pay for his part-time job as U.S. Special Envoy to Ukraine, where he was meant to advise on negotiations with the Russians. Volker resigned as ambassador on being called to testify by Congress about his work with Rudy Giuliani and his fellow “Amigos.”

While Rudy, Parnas and Fruman were seeking all manner of ways to push the Ukrainians into investigating Biden, they were also looking for some energy deals.

So too was Perry, who led the U.S. delegation to Zelensky’s presidential inauguration. He gave Ukraine’s new leader a list of names of people who he claimed would invest in Ukrainian natural gas, and who also happened to be supporters of Perry’s old political campaigns in Texas.

We do not know the substance of Perry’s discussions on gas deals because officials from the U.S. embassy in Ukraine were excluded from Perry’s meetings. Perry, who has refused to testify to Congress, has resigned his government job.

To date, Gordon Sonderland, who secured his ambassadorship with a $1 million donation to Trump’s presidential inauguration, has not resigned.

But after declaring that “everyone was in the loop” on pressuring Zelensky to announce investigations of Biden — by everyone it is assumed this means President Trump, Vice President Pence, former National Security Advisor John Bolton, Pompeo and Barr — he does not seem to have much diplomatic credibility left. Maybe he will quietly return to his hotel businesses.

One of the people who did not like Rudy Giuliani’s nefarious dealings and those of the “Three Amigos” was career diplomat Marie Yovanovitch, who had been ambassador to Ukraine since 2016.

She also didn’t trust chief prosecutor Lutsenko to clean up Ukrainian corruption. It is hardly surprising that the prosecutor should have complained about her to Parnas and Fruman. They forwarded the complaint to Rudy Giuliani, who convinced Trump to have her fired. Pompeo did not object.

Footnote — Trump explained one of the reasons why he fired Ambassador Yovanovitch to Fox News: