Cancel culture is emulated from “an ethic of white supremacy,” says Jay-Z scholar 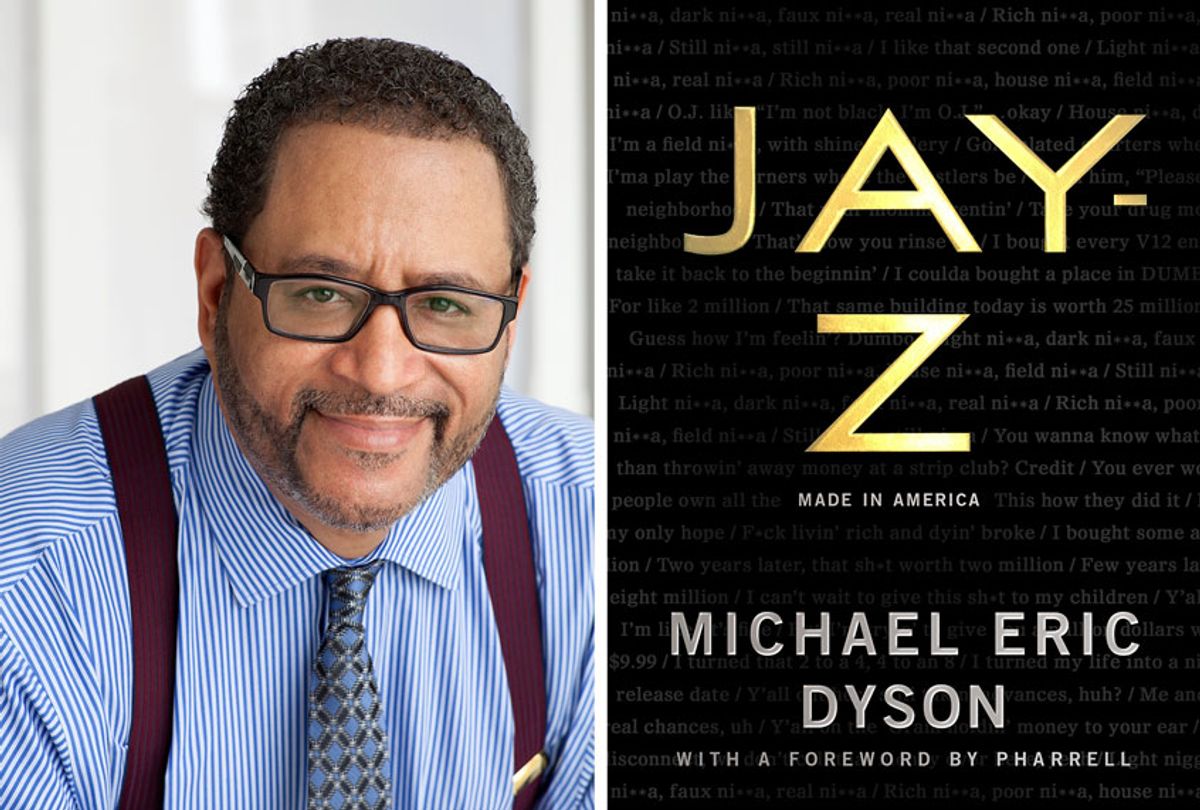 Michael Eric Dyson and his book "Jay-Z: Made In America" (Nina Subin)
--

I came of age in time where Bill Cosby’s infamous pound cake speech, that he delivered during the NAACP awards ceremony in 2004, defined my generation. He demonized our style, music, and even the way our moms raised us. Huge segments of young black Americans rejected old dudes like him, that bourgeoisie type of intellectualism or stuffy scholars who dared to speak on our culture without fully understanding it. Many of them came off like Cosby to us, old clowns that luckily made it out and then turned around and blamed us for racism, failed policy from rip-off-politicians, and poor policing. And it has been that way until Michael Eric Dyson exploded onto the scene.

Dyson, a celebrated scholar, preacher,  author, and editor of over 20 books emerged as a champion of the oppressed. He attended the best universities and didn’t use that education to demonize us, but to interpret our struggle to outsiders while uplifting the beauty that is created in the streets. Dyson wrote books on Tupac ("Holler if You Hear Me: Searching for Tupac Shakur"), Nas ("Born to Use Mics"), and many of our heroes who don’t normally get a fair shake in mainstream. Dyson’s newest book, “Jay-Z: Made in America,” continues that legacy of celebrating the underdog.

The book has been attracting acclaim. Questlove of the Legendary Roots crew said, "Dyson's incisive analysis of Jay-Z's brilliance not only offers a brief history of hip hop's critical place in American culture, but also hints at how we can best move forward." And Publishers Weekly wrote, "Dyson’s excellent study serves as a succinct blueprint of Jay-Z’s artistry and legacy.”

Salon jumped on the phone  with Dyson to discuss Jay-Z, how hip hop – America’s No. 1 genre – has created the greatest poets in history, and why he is teaching a class on Drake at Georgetown University.

The following was edited for length and clarity.

Thank for your time and doing this interview, I know you are extremely busy. The book was fire. You’ve been teaching the Jay-Z class at Georgetown for a long time, right?Anything for you, young brother, but yeah . . . I’ve been doing the Jay-Z class for 10 years.

Wow, the last 10 years. So how did the whole class come about?
Well, you know, I wanted to be able to figure out a way to present some ideas in a systematic fashion to explore Jay-Z. You know, as his cultural relevance is artistic genius and is political as well.

In my opinion, and a lot of my contemporaries, hold Jay-Z up, as the best that has ever done it. And then, when we talk about you, your writing style as a commentator and the person who put out a body of work that we've been learning from since we were kids, we hold you up as the best. So, how does it feel, or how did you feel when, when you sat down to do this project?
Thank you very much for those kind words, you know, it felt. It felt good to know that you are in an arena with somebody of such substantial value. I knew it would be a treat to prove to people who are outside of the realm of hip hop wrong and their dismissal of rappers and merely thinking it was clever as opposed to poetic genius – especially the way hip hop is constantly engaging in serious political reflection, cultural, and racial observation that has much more substance than people gave it credit for. And one of the reasons they fail to give it credit is because the way it is interspersed with the bleeding of material culture.

You wrote about a lot of his lyrics, one of my favorite passages was on "Allow Me to Reintroduce Myself" when he says, “No matter where you go, you are what you are player/ And you can try to change, but that's just the top layer/ Man, you was who you was 'fore you got here.”

Yes! Here he gives a philosophical argument about the persistence of identity. Despite the context of appearing to change. And you can do that, even if he's talking about, you know, alcohol and sex and material culture. So, people end up missing the value of the substance, because he had to woo listeners over with his ability to party and celebrate.

And as a result, a message so delectable was created, and people missed the many gems right in front of them. It was my responsibility to go beyond the surface into the deep and profound preoccupation of the ideas that I engaged with.

I hate when I have to explain Jay-Z to people who don't get it.
Exactly! All of these poetic devices that have been deployed by the greats through the ages and we're underestimating him, because he's a black boy from the 'hood. We don't think that he has that kind of gift.

When in actuality, he’s better than the greats.
And the fact that he's done it all without writing it down.

Yeah. That’s crazy!  About the rest of lyrics you put in the book, were they just bits and pieces from your favorite songs, or you thought they were the best for articulating the overall message?
I needed them for my message, but many are my favorites. You know in most books, you can’t share too much, you need copyright. But Jay-Z gave me permission to liberally quote his lyrics in my quest to prove his poetic genes. That was a gift for which I am grateful because I didn't have to curtail my explanation about this particular lyric or that particular phrase.

So, I wrote a piece about Jay and the NFL deal. I talked about all of the great things that Jay-Z has done, and how people are so quick to jump on social media and explain what they think this deal is after seeing a clip and instantly determine that he needed to be canceled – even though he spent so many years doing all of these great things for people who look like us. I’ll always ride with Kap, but him and Jay don’t have to pull from the same playbook. They can both make change. Who's to say that one person has a monopoly on change?
No one can copyright social change. Kaepernick is a tremendous symbol of social transformation and political challenge, to the extent, the status quo. But he cannot do it alone. A movement of social resistance must be done with others. Sometimes others will take a different route: Martin and Malcolm, Ida B. Wells, Booker T, and Dubois.

And, you know, when you think about the extraordinary diversity of thought that we possess as a people. No one human being, no one leader can exhaust our capacity to enact or to imagine social change.

Kaepernick began his protest, and his organization raised money to give to people on the ground that wouldn't ordinarily receive funding, and then they're highlighting issues of a systemic nature that need to be addressed. Cancel culture is, you know, is to me, the internalization of an ethic of white supremacy, which is wanting to cancel black people from the beginning, straight up emulating a culture that has attempted to eradicate this race.

If we turn around and apply the same principle and means to each other, it's ludicrous – as brother Mike Tyson would say– ridiculous. There’s more than one way to skin a cat. And even if we create goals, we can add different means to attain them. We have to stand outside and protest and force people inside of the system to do the right thing. And when we get inside we actually need to negotiate to make certain that those changes can be made.

An unlimited amount of black people can take checks from the NFL, but Jay-Z taking a check from the NFL is a problem?  Kaepernick was paid handsomely by the NFL and he's still trying to play with them which is fine. But if Jay-Z takes a check from an NFL it is a problem? So, let's just say Kap never gets an NFL job and doesn’t play football again, he's good, he’s rich already. If Jay-Z takes a check from the NFL and employs 1,000 people who aren’t as fortunate, it’s a problem? So, one person who doesn't need the money is more important than a whole bunch of people who could potentially benefit from this? How is that a win?
You are preaching to the choir. It's just, it is incredibly short-sighted. The logic is distorted.  And it doesn't make sense. I think cancel culture needs to be canceled.

When cancel culture works with a clown like Weinstein, it’s amazing, but some cases are just silly. What’s your Top 5 Jay-Z albums?
You know, sitting down to write this book is another labor of love and scholarship from examination and the engagement with an incredibly important figure, who continues to make a tremendous contribution to American culture. What a tough question. I should have five favorite Jay-Z albums. So, I would say, in no particular order, I mean obviously The Blueprint, Black Album, 4.44, and Reasonable Doubt. He puts it at the bottom, but the Blue Print 2 is one my favorite albums. It was his first run at 4.44.

What are you working on now?
I'm teaching a class at Georgetown on Drake. Drake is genius. With Drake, man, you got the Afro diaspora, you got the Afro Canadian versus the American, you got the influence of Caribbean culture on black expression, you got the black Jewish dialogue and debate. You got the transnational interconnect interaction and gesture toward black culture creativity. You got the global acceptance of an art form. He's got the bringing back of melody, you got the tolerability of masculinity, you got all that, and I think Drake is an enormously influential and productive figure who deserves to be executively critiqued. Don’t sleep on Drake.

No, you can't you can't sleep on Drake. He shuts the internet down every time he put a project out.  He's definitely somebody that deserves to be studied, straight up. I guess the last thing I want to ask you is there anything about Jay, in his music and his influence that you feel like the general public doesn't really get, that you've discovered through your scholarship and research?
So, that's a great question. You notice when you studied these sophisticated, complicated, extended observations about human existence that we wouldn't expect from a dude from the projects, with no formal education and no college. Yet he's bringing extraordinary depth weight, and people miss that this brother has been talking about police brutality, he's been talking about the over-medication of black children, and the need for psychotherapy. He's been talking about slavery and has been accumulating a body of work that addresses the depths of our existential and racial crisis for over two decades. Pure genius.