Climate, not conflict, drove many Syrian refugees to Lebanon

Climate is a major obstacle for many people when they consider returning to their homeland.

By Hussein A. Amery 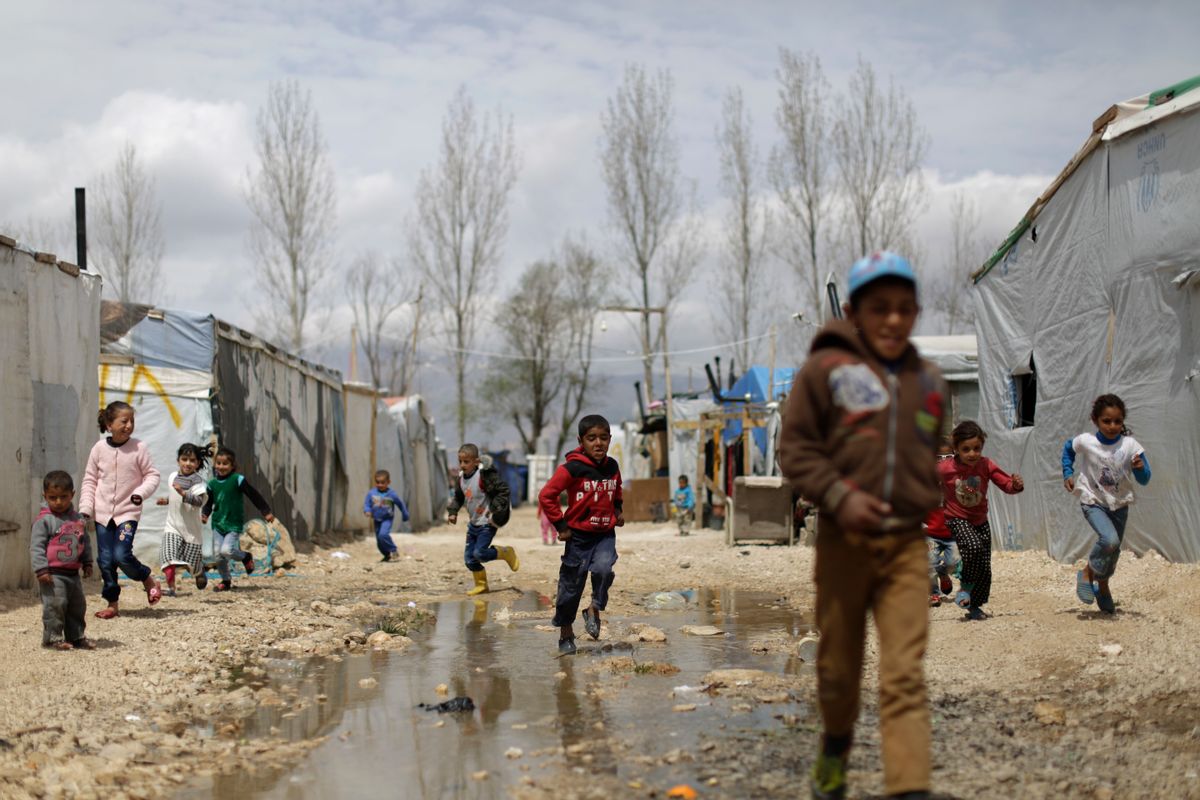 Syrian refugee children run at an informal refugee camp, at Al-Marj town in Bekaa valley, east Lebanon Lebanon, Saturday, April 8, 2017. For the millions of Syrian refugees scattered across camps and illegal settlements across the region, the chemical attack on a town in northern Syria and subsequent U.S. strike was a rare moment when the world briefly turned its attention to Syria, before turning away again.(AP Photo/Hassan Ammar) (AP)
--

People who fled Syria in recent years are often viewed as war refugees because of the violence that has engulfed much of the country since 2011.

But those from the northern and northeastern parts of Syria may more accurately be viewed as climate refugees, fleeing not a worsening conflict but an increasingly severe drought.

I have been studying various aspects of water and food security in the Middle East for a long time. Now I have begun a new project studying the social and economic conditions needed to repatriate rural refugees to the farming communities in Syria.

My recent interviews with Syrian refugees who now live in Lebanon reveal that climate is a major obstacle for many people when they consider returning to their homeland.

In Syria, most farming relies on rain, not irrigation, which makes it vulnerable to climate change. Many refugees from the Raqqa region tell a similar story: As one told me, “The land has been giving less and less.”

The reason, they told me, is that it rains far less than it used to when they were young farmers, and rainfall is less predictable.

Historically, northern Syria has been a productive agricultural area, making up part of the fabled Fertile Crescent of the Middle East, where humans first began farming around 9,000 B.C. An estimated 75 percent of Syria’s wheat production is in northern and northeastern parts of the country: Al Haksa, Ar-Raqqa, Aleppo and Dayr Az Zawr provinces.

In general, precipitation is highest in the coastal areas in the west of the country and along the Turkish border to the north. Usually, there is enough rain to support rain-fed farming and pastureland for sheep and goat herders. Rainfall decreases farther east and south in the country.

In the last few centuries, the country’s drought cycle has become more frequent, from having a drought once every 55 years, to every 27 years, to every 13. Now, droughts happen every seven or eight years.

The poorest peasants of the Raqqa region are hit the hardest because they do not have many assets to sell in times of drought — nor any surplus grains to save for the next planting season.

There is not a direct, immediate relationship between changing climate and the drive to migrate. The climate can change slowly, and people don’t usually respond instantly when circumstances shift. Thousands of Syrians have been leaving northern and northeastern parts of the country over the past 20 years or so.

As the severe drought of 2006 to 2011 hit, the number of emigrants rose. A 2011 study found that Syrian households had lost 19.5% of their income as a result of droughts and other environmental factors — and that rain-dependent farmers were hit harder than farmers who relied on irrigation.

The vast majority of Syrians who left northern and northeastern Syria are farmers and unskilled workers. Many of them were drawn, on a permanent or seasonal basis, to the Bekaa Valley, a large agricultural area in eastern Lebanon. The valley enjoys a moderate Mediterranean climate.

A rise in refugees

In 2011, before the Syrian civil war broke out, up to one million Syrians were believed to be working in Lebanon.

When the violence started, those established settlers drew in relatives and neighbors. Official numbers say there are close to a million Syrian refugees also in Lebanon now, in addition to the million workers there before the war. The Lebanese government and U.N. officials believe the actual number is closer to one and a half million refugees. That means Syrians make up over one-quarter of Lebanon’s population.

In my recent interviews with Syrian refugees in the Bekaa Valley, I learned why they had left their homes and what it might take for them to be ready to go back. The refugees I spoke with came from farming backgrounds. Many were from the city of Raqqa and nearby villages.

A few, especially those from southwestern Syria, spoke of bumper crops and routine farming challenges like varying harvests and the costs of seeds, fertilizer and livestock fodder. However, farmers who came from northern and northeast areas such as Raqqa and nearby towns and villages were almost unanimous in describing how hard farming had become over the last 20 years.

The refugees attributed this to government agriculture policies that changed in the face of drought. The Syrian government reduced the amount of land that could be planted with cotton and sugar beets, water-intensive crops that earn farmers a lot of income. The government tried to boost farmers’ income by selling drought-resistant cotton seeds and sprinkler systems, which conserve water and boost yields.

However, refugees told me, farmers were already financially squeezed from lower yields due to the drought. Most were small-scale farmers, or didn’t own the land they worked, so they could not earn enough to purchase the technology.

Many refugees told me that even if their home region became physically safe to return to, they would not go back. They feared they would be unable to eke out a living from the increasingly arid land.

If they did return, they would also be faced with needing to repair war-damaged wells and irrigation canals and restore services from veterinary experts and farmers’ suppliers, who were driven away by war. Almost all of this infrastructure remains unrepaired.

Together, the drought and the war’s destruction mean it’s unlikely that many of these refugees will leave Lebanon anytime soon — if at all. The Syrian civil war may end one day, but the land’s problems will remain.

MORE FROM Hussein A. Amery