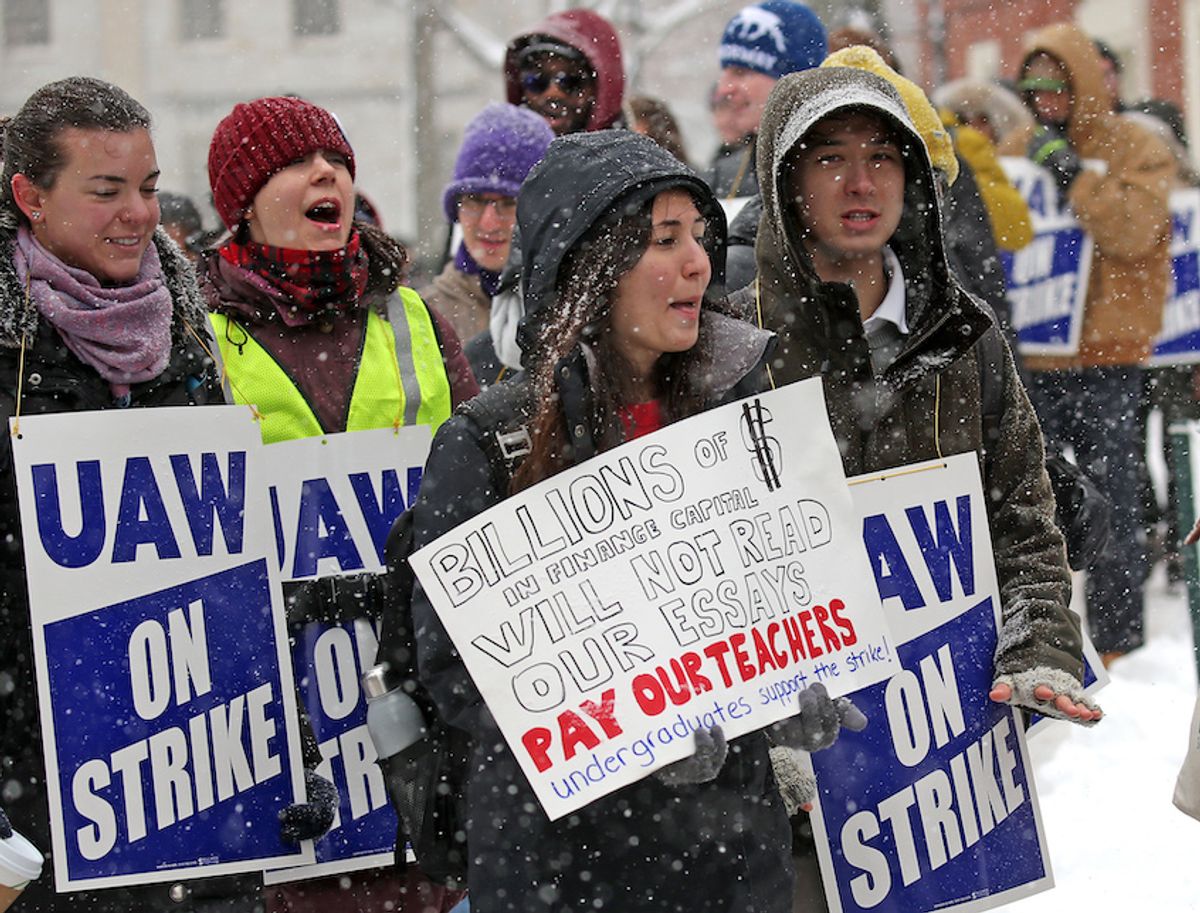 In late September, the National Labor Relations Board (NLRB) proposed a ruling that will fundamentally change how graduate students can interact with their universities. The Board argues that graduate research and teaching assistants are only students, not workers, and therefore do not have the right to unionize and collectively bargain with our universities.

I’m a graduate student in the biology department at New York University (NYU), and like many other graduate students at private and public research universities, I perform critical roles for the benefit of my university. On average, graduate student research assistants in the U.S. make only about $20,000-$25,000 a year in the form of departmental support and grants, although this can vary significantly based on academic discipline and location of the university. Despite this, we work more than one job. We spend years doing research around the clock. We attend conferences and do outreach to publicize our teams’ work and build collaborations with researchers at other universities. We teach classes and labs for minimal, or sometimes no, additional pay because our schools don’t have enough full-time instructors. And we do the grunt work to apply for — and win — lucrative grants, which fund our own work and the laboratories for which we work.

Yet despite all of these roles, the NLRB claims that graduate student workers at private universities should not be considered employees. (The NLRB does not have jurisdiction to rule on graduate students at public universities, which are governed by state labor laws.) The board’s reasoning: The endeavors of graduate students are first and foremost educational, which means they don’t fall under their definition of labor.

This ruling is part of a long history of back and forth at the NLRB on the issue of graduate worker unions. In 1972, after asserting jurisdiction over private college and university faculty, the board explicitly excluded graduate students from collective bargaining. Graduate student teaching assistants were not considered employees with the right to unionize by the board until a decision in 2000. But over the next several decades, the presidentially appointed board flip-flopped its position multiple times, as political power in Washington changed hands. The most recent of these changes had come in 2016, under President Barack Obama, when the NLRB classified not only graduate teaching and research assistants, but also undergraduate teaching and research assistants, as workers.

Under President Trump, the NLRB has now proposed to strip our right to unionize away again. But the ruling’s logic — that graduate assistants’ work is primarily educational — is deeply flawed and demonstrates a fundamental misunderstanding of the duties that graduate students perform. The work that we do not only furthers our own training, it is necessary and important for our departments and universities to function.

A primarily educational relationship would describe a situation where students simply learn course material and do not produce any novel insights. Attending classes, completing homework assignments, and taking tests are primarily academic endeavors: They are attempts to understand or synthesize information that already exists.

But for many graduate students — as is clearly true for Ph.D. students in science, technology, engineering, and math (STEM) fields — classes, homework, and tests are hardly the primary focus of their work. The task that defines a Ph.D. is the completion of original research that marks a significant advance in knowledge for the field, something the student must prove to a committee of experts when defending their dissertation.

As a result, graduate students make up a large part of the United States’ $72 billion-a-year academic research industry. That total does not even account for the work that graduate students do teaching classes and labs, grading tests and assignments, and designing syllabi and course work. Clearly, the university has an economic interest in its graduate students that goes far beyond tuition checks.

In the face of those economic interests, unions can provide students with vital protections. Between September 2016 and May 2017, graduate student organizing committees at six private universities successfully negotiated contracts with their universities. These contract negotiations delivered, among other things, standardized pay rates; annual cost-of-living raises; improved health care, childcare, and dependent-care benefits; and arbitration support in contract disputes.

And then there’s the matter of overworking. Departments or graduate schools usually offer set amounts of sick days or vacation days for their students, but students often forego this much-needed time off. This may be due to their inability to get away from the lab if they have ongoing experiments or because they don’t want to appear lazy. Union contracts have helped address that problem by setting standards for paid leave.

If it passes, the NLRB’s proposal to strip graduate students of employee status will have tangible repercussions. I am fortunate to work at a university that, due to decades of strong organizing by graduate students and their allies, has voluntarily recognized our Graduate Student Organizing Committee as a valid bargaining unit. The university has said the NLRB’s decision won’t have an impact on proceeding with a new contract agreement in 2020. But other universities have not been nearly as willing to voluntarily negotiate with unions.

As a result, there is a national campaign by unions who have partnered with graduate workers to submit public comments on the NLRB’s proposed ruling. This period of public comment continues until December 16, during which time anyone can write to the Board explaining how this ruling would affect them.

The historical underpaying and overworking of graduate students will surely continue unless graduate students have a way to effectively organize and negotiate with their universities. By denying graduate workers the right to unionize and bargain, the NLRB has decided that we do not deserve to be protected against these abuses. But they are wrong: Our work is always work, not just when it is convenient for our universities. And we as graduate workers have a right to stand up for better working conditions.

Marissa Knoll is a second year Ph.D. Student in biology at New York University studying host-pathogen relationships and evolution. She is an active member of the UAW-GSOC that represents graduate students at NYU.