Impeachment: Republicans have no defense for Trump — just tribal hatred of Democrats

During the "opening arguments" hearing, Republicans stick to conspiracy theories and claims that Trump is a victim 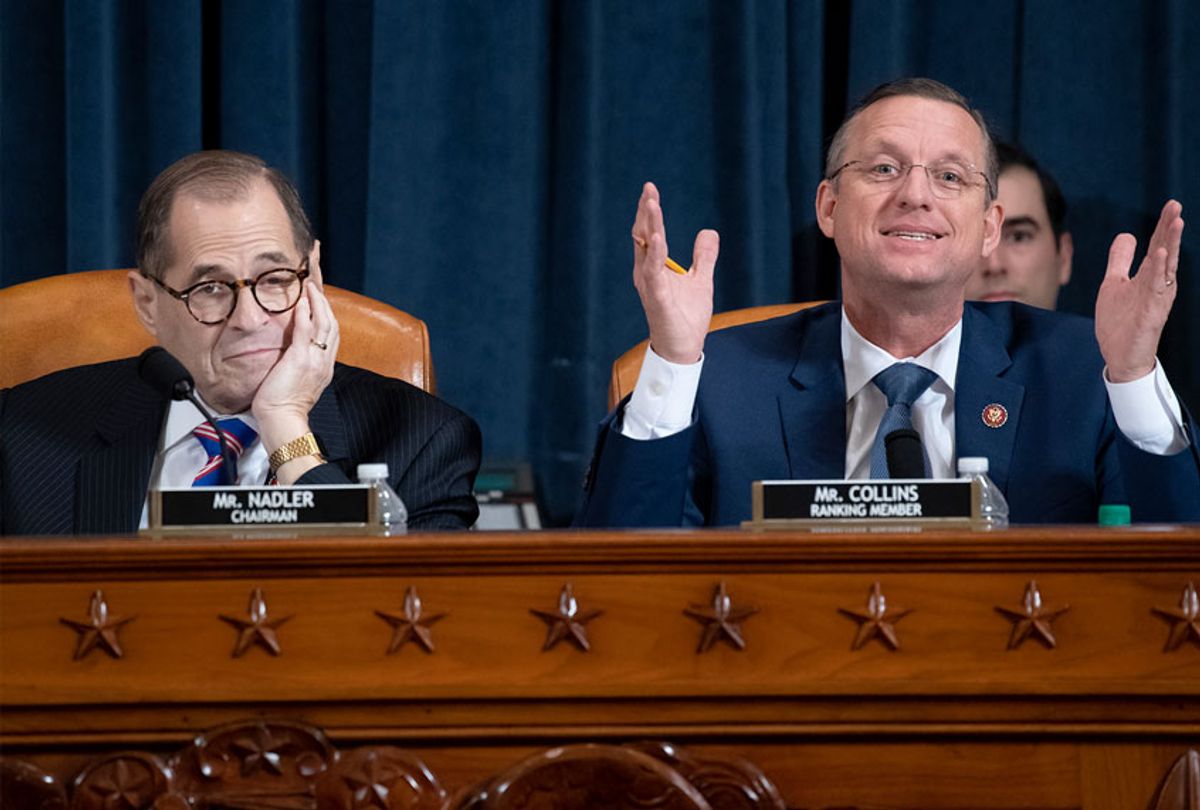 Ranking member Rep. Doug Collins (R-GA) speaks as Chairman Rep. Jerrold Nadler (D-NY) listens during testimony by constitutional scholars before the House Judiciary Committee in the Longworth House Office Building on Capitol Hill December 4, 2019 in Washington, DC. This is the first hearing held by the Judiciary Committee in the impeachment inquiry against U.S. President Donald Trump, whom House Democrats say held back military aid for Ukraine while demanding it investigate his political rivals. The Judiciary Committee will decide whether to draft official articles of impeachment against President Trump to be voted on by the full House of Representatives. (Saul Loeb-Pool/Getty Images)
--

Republicans have nothing: That is the only reasonable conclusion one can draw after Monday's impeachment hearing before the House Judiciary Committee. It's clear that Donald Trump is guilty of running an extortion scheme against Ukraine in order to gin up false accusations against his potential 2020 rival, former Vice President Joe Biden. The evidence, which has been laid out in a series of hearings and in a 300-page document released last week, is voluminous and crystal-clear.

There is no substantive defense of Trump in the face of this overwhelming evidence. Instead, Republicans are betting that Trump's base voters hate Democrats so much that they will keep on supporting Trump, no matter what crimes he commits, in order to stick it to the Democrats. It's not necessarily a bad bet.

The Democrats, as they have throughout these hearings, presented sober-minded arguments focused on protecting democracy from the president's illegal machinations. In his opening statement, House Judiciary Chair Jerry Nadler, D-N.Y., argued that the founding fathers "knew that the most dangerous threat to our country might come from within, in the form of a corrupt executive who put his private interests above the interests of the nation."

The two Democratic lawyers, Barry Berke and Daniel Goldman, spent their time in Monday's hearing laying out the details of the case against Trump, showing, as Berke argued, "that the president abused his power" and, in doing so, "betrayed the national interest" and "risked corrupting our elections."

(The abuse/betray/corrupt formula was presented in a literal ABC format.)

Both lawyers laid out, in clear and compelling detail, the evidence against Trump: a reconstructed call between him and Ukrainian President Volodymyr Zelensky, the withheld military aid, an admission from acting White House Chief of Staff Mick Mulvaney that the aid was withheld as leverage, text messages between State Department employees about the extortion campaign, Trump doubling down on the pressure on Ukraine in public and the testimony of multiple witnesses from the State Department.

Collins pronounced, in his usual tone of loud but faked umbrage, that all this is happening because Democrats "can't get over the fact Donald Trump is president of the United States and they don't have a candidate that they think can beat him."

Castor and Collins complained at length about how various Democrats have, for years now, called for Trump's impeachment on a variety of issues, claiming that this is evidence of a campaign of persecution.

In reality, of course, the issue is that Trump is as enthusiastic about committing impeachable offenses as he is about guzzling Diet Coke. The problem isn't that Democrats were over-eager to impeach, but quite the opposite: Because Democratic House leadership refused to move forward to impeach Trump for using his businesses as cut-outs to take bribes or for his campaign finance violations or for sexual assault or for obstructing justice on the Russia investigation or for any of his other impeachable offenses, Trump felt empowered to up the ante. Which is how he ended up extorting Ukraine's government and forcing the Democrats' hand.

The extreme bad faith of Castor's arguments was evident in the way he accused Democrats of hearing a "disgraced felon," Michael Cohen, as a witness — without mentioning that the disgraceful felony Cohen committed was at Trump's behest.

Castor also complained about "a rushed process" and said Democrats had "missed opportunities to obtain relevant information" by not getting more testimony. Again, this is eye-popping bad faith from the Republican counsel. Democrats definitely wanted more information, but the White House has blocked all document requests and prevented numerous witnesses from testifying.

This gambit also defies common sense. Castor is trying to imply there's some exonerating evidence Democrats could find if they just looked hard enough. But if Trump has evidence to exonerate himself, then why doesn't he simply provide it, as Speaker Nancy Pelosi has repeatedly invited him to do? Why, when asked by the House to offer a defense of himself, has the president refused, leaving it to a congressional staffer like Castor to do the work instead?

To be clear, Castor repeatedly argued that there was no hard evidence of Trump's scheme. It was a remarkable show of the Republican skill at gaslighting, in the face of the extensive of evidence that has already been exposed and was carefully laid out by Goldman and Castor.  Castor's willingness to bluntly lie about the record is remarkable, but shows how Trump has boxed in his Republican defenders by running around insisting that his call to Zelensky was "perfect" and repeating "no quid pro quo" like a parrot. Castor also used his time to push Trump's baseless conspiracy theories about Biden and to accuse Ukraine's government of somehow working against him.

But the meat of the Republican defense is focused less on trying to make the laughable argument that Trump is innocent than on simply heaping more hate on the Democrats, hoping that the base's loathing of anything labeled with a D will create a knee-jerk unwillingness even to consider the evidence against Trump. They're probably right to bet their money on this, as polling data shows that Trump supporters are far more concerned with refusing to admit that they voted for a bad person than with petty issues like the survival of democracy.

Sadly, this demoralizing display of shamelessness, mendacity and bad faith from Republicans is probably only a taste of what the country is facing when articles of impeachment go to a trial in the Senate. As Heather Digby Parton argued in Salon Monday, Trump is already "demanding that Senate Republicans allow the president's lawyers to put Joe Biden on trial, and air their nutjob conspiracy theories on every network."

Republicans in the House went all-in on the strategy of lying, spinning conspiracy theories, and betting that their base hates Democrats enough to play along. In real time, it's mostly confusing nonsense. But Republicans are counting on their voters, for good reason, not to watch the actual hearings and instead to get their information from misleading videos edited together after the fact. There's absolutely no reason to think this strategy won't continue to work. Republicans know they don't have to convince most of the country — just those voters in red states who, by dint of their own racism and sexism, are already primed to back Trump, even if, as in his own famous example, he shoots someone on Fifth Avenue.

For this reason alone, I'm beginning to be glad that Democrats want to wind this up quickly. The Republican lies are exhausting — arguably they're meant to be exhausting to people of good faith, because exhausted voters often stop voting altogether. Limiting the amount of air time handed over to Republicans to spin their lies is starting to feel like a mercy.