A new Instagram meme is actually good for your body image, study says 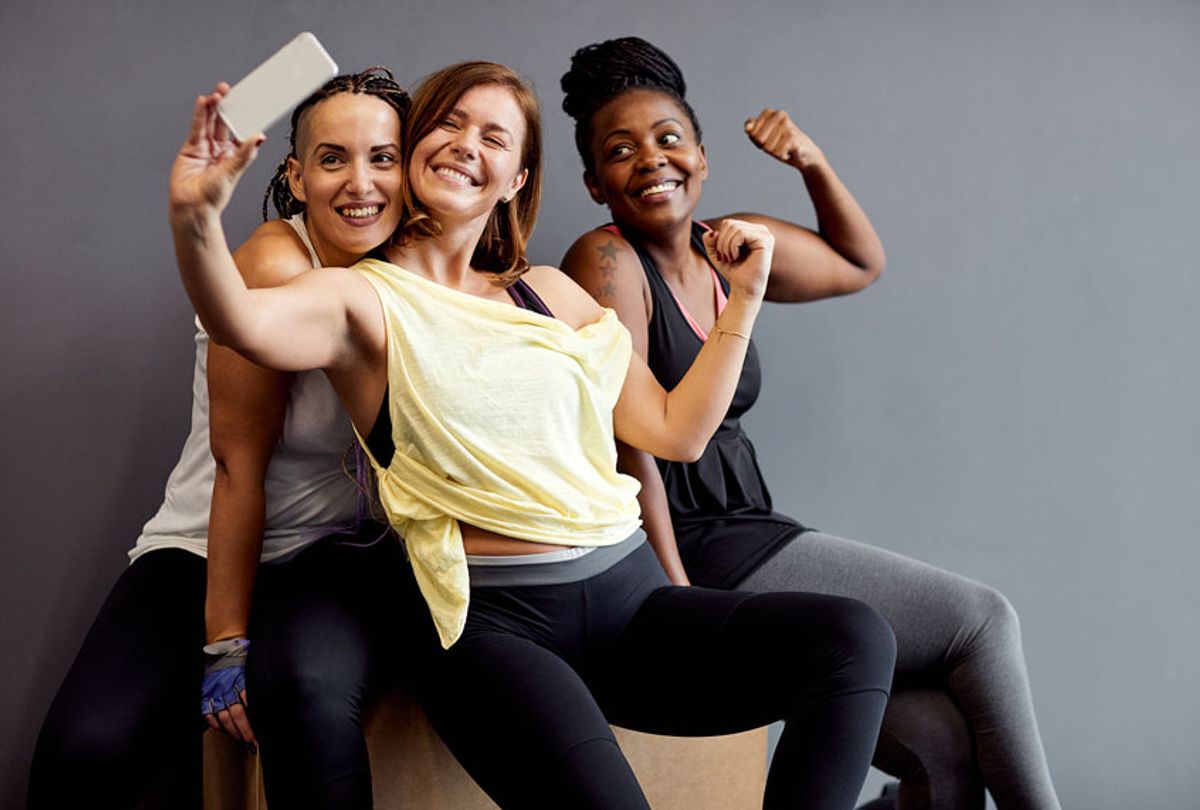 Women taking a selfie at the gym (Getty Images)
--

Many psychologists have observed with alarm that Instagram encourages unrealistic beauty standards and distorts our impression of our peers’ lives (and of our owns). Indeed, the social media giant has a filter effect — literally and figuratively — on our self-perception. One is more apt to ‘gram photos of sunny days in vineyards, backpacking through Europe, or getting in shape — and omit or gloss over the sleepless nights, blemishes, and fights with loved ones. Photographic tricks, apps and filters transform influencers into supermodels, setting unrealistic beauty standards, especially for women.

And as many experts have warned, the selective portrayal of our lives via Instagram can have negative effects on mental health. A 2018 study conducted by researchers at York University in Toronto found that young women using social media often compared their appearance with that of their female peers, which led to negative thoughts about their own bodies. Magazine ads once bore the brunt of the blame for perpetuating unattainable beauty standards; thanks to filters and photo editing, Instagram is now a culprit too.

One creative online movement, “Instagram vs. Reality,” visually subverts this damaging self-aggrandizement by replacing it with a dose of realism. Posts in this vein depict users calling out and identifying their own heavily-edited photos by comparing them side-by-side to “real” moments – the un-tucked tummy, the unedited, makeup or lighting-free moment. Instagram vs. Reality posts are an exercise in humanism and, frequently, body positivity.

Surprisingly, it turns out the visual meme is not just heartwarming, but can actually have positive impact on one’s body image. A new study from Australian researchers published in the journal New Media & Society tested the theory that clearly marking edited photos as fake might mitigate the negative thoughts that emerge from the comparison process. In the study, 305 U.S. women between the ages of 18 to 30 were randomly assigned to view one of three sets of Instagram images: “Instagram vs reality” images, the “ideal[ized]” photo alone, or the “real” photo alone.

Participants viewed each image for five seconds, and were asked to rate the visual quality of the image and answer a simple question to check for attention. Following the image portion of the study, the women completed a survey to measure body dissatisfaction before and after viewing the set of photos.

“The overall aim of this study was to investigate the effect on women’s body image of exposure to ‘Instagram vs reality’ images, an emerging contemporary social media trend,” the researchers wrote. “As predicted, it was found that exposure to paired ideal-real images, as well as to real images, resulted in lower body dissatisfaction than did viewing idealized Instagram images. “

Results also revealed that women’s body dissatisfaction increased if they only looked at the “ideal” versions of the Instagram image. This was particularly true for those who reported comparing themselves to the images.

Researchers added: “Viewing these posts does seem to go some way to counteracting the usually obtained negative effect of viewing idealized Instagram imagery.”

This is because, the researchers speculate, the comparison is to something more real and relatable.

“In the case of the ‘Instagram vs reality’ and real images, comparisons are being made with more realistic, less thin and less attractive women, and thus are more likely to constitute lateral or downwards comparisons,” the researchers stated. “As predicted, appearance comparison was much more detrimental in the case of viewing ideal images than viewing real or paired images.”

Like all studies, this one came with its own set of limitations. The sample of young women was confined to users who lived in the United States. The researchers also only tested immediate responses to five minutes of exposure to the images.

“Despite the above limitations, this study provides a novel contribution to the small but growing experimental literature surrounding Instagram and women’s body image,” the researchers stated. “It was found that ‘Instagram vs reality’ images led to lower body dissatisfaction than did ideal images, and also markedly reduced the negative impact of appearance-based social comparison.”