Weed vapes may not be safe from vaping-linked health problems

Pass the joint: Old-fashioned bongs and pipes appear to be much safer than their electronic counterparts 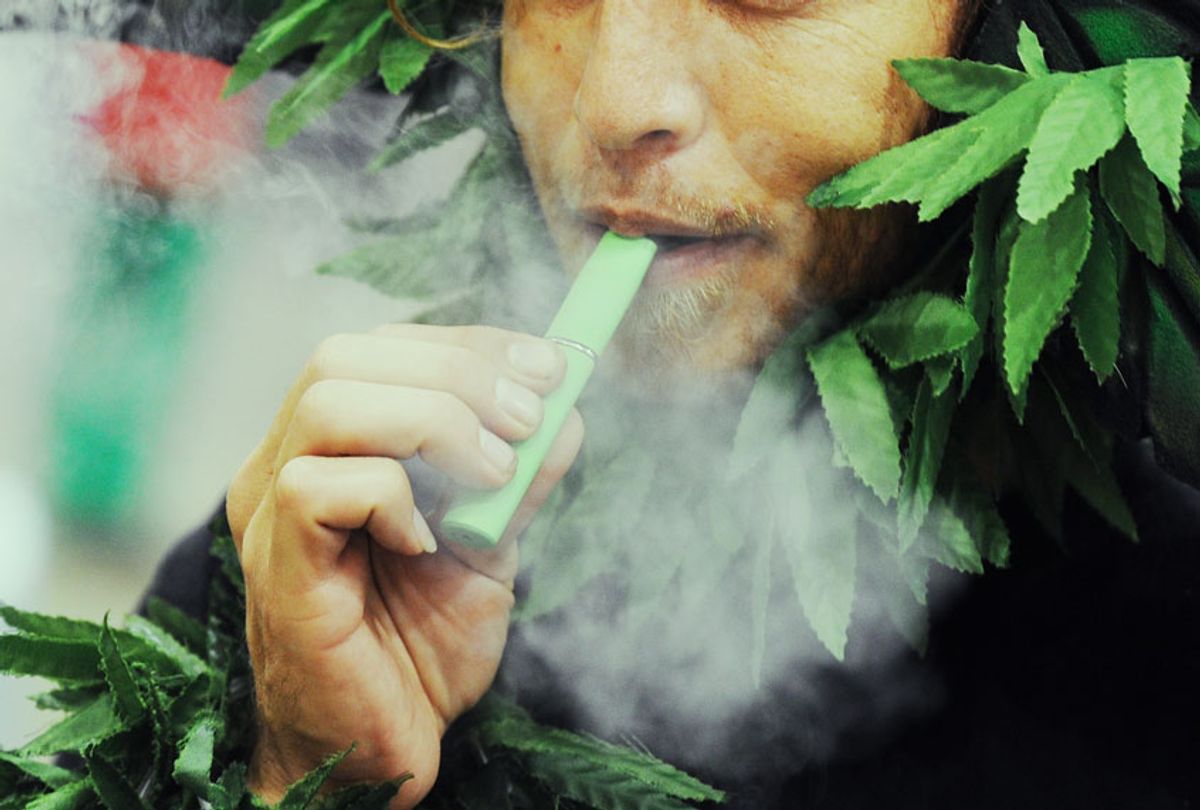 The victim tally continues to rise for the vaping-linked now known as EVALI , an acronym that stands for "e-cigarette or vaping product use-associated lung injury," and which appeared to appeared to be linked mainly to nicotine-delivering vape products that simulated cigarettes. Unfortunately, weed vapers who thought they were safe from vaping-related health issues may not be safe either, as a new study found that marijuana vapes may harbor different harmful chemicals.

As reported by the Centers for Disease Control and Prevention (CDC) last week, a total of 2,291 cases of EVALI from around the country were reported to the federal health agency as of December 3. Forty-eight deaths were confirmed in 25 states and the District of Columbia. In the beginning of September, numbers hovered around 450 people being hospitalized, and five deaths. As scientists continue to investigate the outbreak and illness, they are faced with a lot of unknowns, including a specific product and cause. The CDC states “it appears that vitamin E acetate is associated with EVALI,” however, “evidence is not yet sufficient to rule out contribution of other chemicals of concern.”

A recent study published in the September issue of academic journal ACS Omega, titled “Aerosol Gas-Phase Components from Cannabis E-Cigarettes and Dabbing: Mechanistic Insight and Quantitative Risk Analysis,” is raising questions about what happens when additives are put into cannabis vaping products. The study seeks to bring a greater understanding about product safety when cannabis is inhaled using nontraditional methods like vaping.

“What’s inhaled is actually different than what’s listed in the ingredients,” Portland State University Chemistry Professor Rob Strongin, who led the research team for the study, said in a media statement.

The group of researchers studied the chemical reaction that takes place when cannabis is consumed using a vape pen or dab rig. Dabs are another term for concentrates of hash oil, which have extremely high concentrations of THC, the active psychoactive in cannabis, and which can be smoked or vaped to produce highs greater than traditional pipe or water pipe smoking. Dabs require higher temperatures to smoke, which requires a dab rig, a special high-temperature tool for vaporizing the concentrate.

Researchers found that in these chemical reactions, more toxins emerged from terpenes than from THC. Specifically, they found a nearly fivefold increase in the chemical isoprene, which was released from THC with 10 percent more terpenes compared to THC alone. Inhaling isoprene caused tumors in mice and rats.

“Several identified components are International Agency for Research on Cancer-classified carcinogens, and exposure to these may place a burden on the health of people that use dabbing or vaping to consume cannabis,” the researchers stated.

Terpenes are the naturally occurring combination of carbon and hydrogen and can be found in various plants. However, the researchers' findings suggest that terpenes are added into pure THC extractions to dilute the product, and give it a specific aroma and taste. Strongin said they found some vendors adding up to 30 percent additional terpenes to their products.

“There are fewer toxins formed from THC as compared to terpenes,” Strongin said. “This is consistent with some of the vaping-related injuries we’re seeing. It’s not the active ingredients, like THC or nicotine, that appear to be causing the hospitalizations and deaths, but what they are combined with.”

Vape pens are made up of an atomizer, a cartridge or tank, a sensor and a mouthpiece. When a personal inhales and sucks on the mouthpiece, the battery of the atomizer sends a signal to the sensor which causes the temperature in the atomizer to rise. Researchers relied on a Quantitative risk assessment (QRA) to calculate the risk and approximate the probability of the incidence to figure out a defined outcome.

Their findings suggest the less additives the better, but there are still a lot of unknowns.

“There's a reason that no one studied the inhalation toxicity of a lot of the ingredients in e-cigarettes because nobody thought we'd be crazy enough to be inhaling them,” he said. “But the problem now is that there’s a huge gap in our knowledge.”

As Salon reported in 2018, some of the chemicals in flavors used to add flavor to e-cigs are billed by manufacturers as safe because the FDA has approved them for ingestion. Yet no one knows for sure if you can atomize and inhale the same chemicals safely, and many chemicals approved for ingestion become toxic after combustion.

In September, Jake Plattenberger, an attorney who defends victims who have been exposed to diacetyl, said there were a lot of chemicals in e-cigarettes consumers and health officials don’t know about.

“These formulas are treated as trade secrets, and the vaping companies aren’t required to disclose what their formulas are or what their ingredients are, but we know quite a bit from the food flavoring industry because the same ones were migrated over to the vaping industry,” Plattenberger told Salon.

Many vape makers, both of nicotine and THC e-cigarettes, advertised their products as a safer, healthier alternative to old-fashioned smoking. As more research emerges in this under-regulated industry, it turns out those claims may be very untrue.