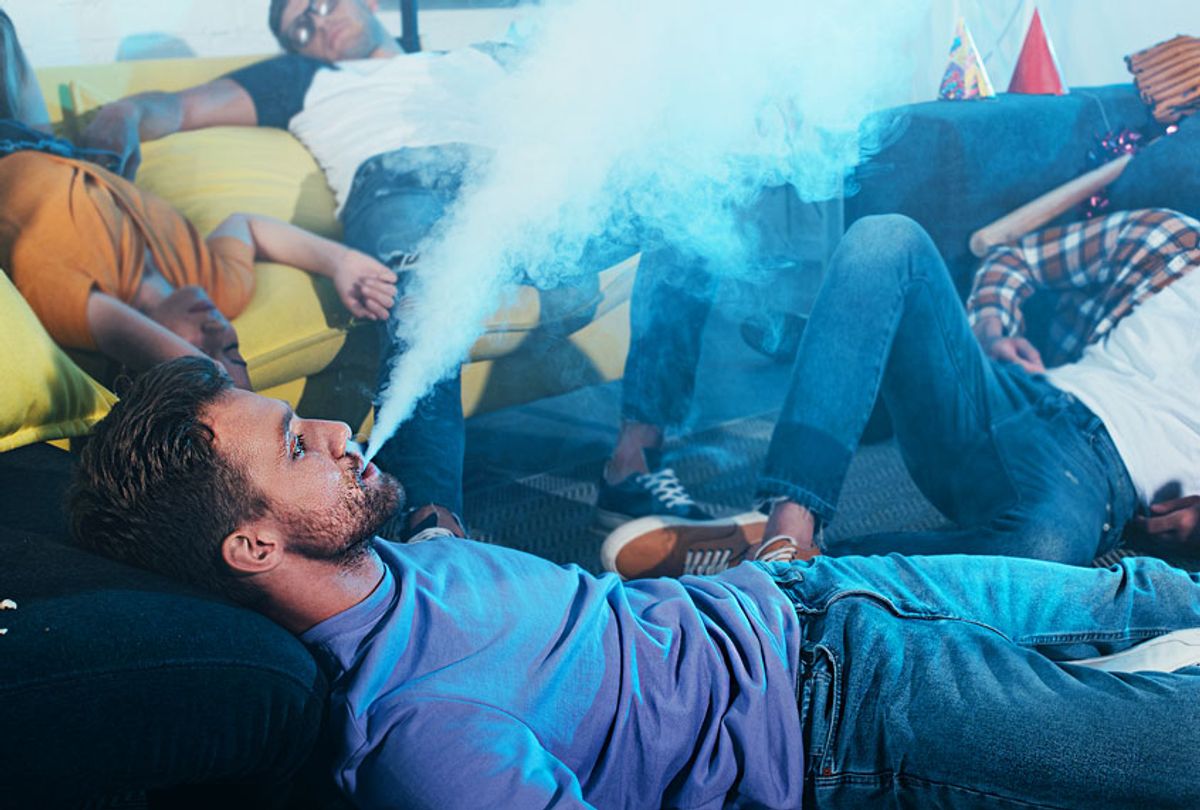 The rise of mysterious and deadly lung diseases thought to be linked to vaping nicotine or cannabis-related products has doctors and public health experts across the country scrambling to identify a definitive cause. The pandemic emphasizes the mysterious and unstudied health effects of vaping, and also raises fears over the medical consequences of long-term vaping for teens — some of the most avid users of e-cigarettes, as one in five high school students in the United States vape.

On Friday, the Centers for Disease Control and Prevention (CDC) said the number of vaping-related illnesses surged to at least 450 cases in 33 states and the Virgin Islands and cautioned people about using e-cigarettes, especially those bought off the street.

Five people died from vaping-related respiratory illnesses — in Illinois, Oregon, Indiana, Minnesota and California, the CDC reported Friday. Many, though not all, of the patients who had fallen ill reported using products containing THC, the psychoactive ingredient in marijuana. A smaller group reported using nicotine only.

No infectious causes have been identified, and the CDC said the "lung illnesses are likely associated with chemical exposure," but warned it is too early to pinpoint a single e-cigarette product or substance that is common to all cases.

In a preliminary study published Friday, officials in Illinois and Wisconsin detailed 53 cases they've investigated — 28 in Wisconsin and 25 in Illinois. Most of the patients were male, with an average age of 19, and all were previously healthy.

All patients had a history of e-cigarette use: 80% reported using products containing tetrahydrocannabinol, THC, the psychoactive ingredient in marijuana; 61% used nicotine products; and 7% had used cannabidiol, or CBD products.

In some of these cases, patients either used only THC products or only nicotine. Patients reported using 14 different brands of THC products and 13 brands of nicotine products in a wide range of flavors. "Dank Vape" was the most common THC product that was reported.

The CDC urged people to stay away from using e-cigarettes, particularly those purchased off the street, as investigators work to pinpoint exactly what's behind the lung illnesses.

The announcement is the latest indicator of the potential health risks of e-cigarette use among teens.

From 2017 to 2018, e-cigarette use among high school students increased by 78% (from 11.7 to 20.8%), according to a survey funded by the Food and Drug Administration and the Centers for Disease Control and Prevention.

Health and Human Services Secretary Alex Azar said the new data revealed the country "faces an epidemic of youth e-cigarette use," which he said "threatens to engulf a new generation in nicotine addiction."

Former FDA Commissioner Scott Gottlieb said e-cigarettes are not safe for children and teens, noted noted they "may be less harmful alternatives for currently addicted smokers who still seek nicotine." However, he added, the agency will "not allow that opportunity to come at the expense of addicting a whole new generation of kids to nicotine."

The survey, commissioned by the FDA and CDC, suggested the surge in e-cigarette use among children and teens is likely due to the recent popularity of certain types of vaping devices, such as JUUL, which resemble USB flash drives. The product can be used discreetly, deliver high levels of nicotine, and come in sweet and fruity flavors like mango, watermelon and creme, that appeal to kids. (JUUL, under pressure from the FDA, stopped selling most of its flavored nicotine pods in stores last year, but continues to sell them on its age-restricted website.)

Despite the widespread popularity of e-cigarettes, their effect on the health of those who use them remains largely unknown. Though e-cigarettes generally do not produce the tar or toxic gases found in regular cigarettes, all JUULs and most e-cigarettes contain the addictive substance nicotine.

Most research suggests that e-cigarettes are far less harmful than traditional cigarettes, but that doesn't mean they're foolproof. Recent reports about a "mysterious vaping illness," links between e-cigarette use and heart disease, teen lung diseases and the impact of vaping on blood flow (even without nicotine) have caused some people to believe that cigarettes are as or even more dangerous than regular cigarettes, even though most doctors and public health experts agree that vaping is mostly less harmful.

"I would argue that people are being given false and misleading information by suggesting that vaping is just as bad as smoking," Dr. Michael Siegel, a professor at Boston University School of Public Health whose research focuses on tobacco reduction, told Salon.

"There are a lot of adult vapers who are getting scared when they hear that vaping is just as bad as smoking, then they logically conclude, 'Well, why don't I just smoke?'" he continued. "That's a devastating public health consequence."

Since e-cigarettes are a relatively new product, the potential health risks associated with such devices are considered preliminary and far from conclusive. It may take years or even decades for researchers to uncover the full and lasting health consequences of e-cigarettes, especially among young, healthy users.

Additionally, there are nearly 500 different e-cigarette on the market and each one delivers various levels of nicotine (or none at all), flavorings and combinations of chemicals. This makes it even more difficult to assess the health effects of vaping.

Dr. Tavis Glassman, a professor at the University of Toledo School of Population Health whose research focuses on adolescent smoking, told Salon that, in addition to the unknown health effects, he is concerned that teens "underestimate the nature of nicotine addiction" and dismiss potential threats as "fake news."

Though e-cigarettes are often considered to be less lethal than cigarettes or cigars, health professionals have warned that the way e-cigarettes deliver nicotine can harm the parts of the developing adolescent brain that control addictive behaviors, attention, learning, mood and impulse control, particularly because they can deliver higher concentrations of nicotine per puff than traditional cigarettes.

"Since these pods are so easily hidden (devices plugged into computers, even wrist watches) users may have continuous access with no breaks between hits, resulting in extremely high levels of nicotine to the body," explained Dr. Geraldine Britton, the director of Binghamton University Interdisciplinary Tobacco Use Research Program.

Britton added that while some adults use e-cigarette products to help them quit traditional cigarette smoking, many teens who have never smoked tobacco now use e-cigarettes recreationally. She noted the popularity of e-cigarette use among teens "contributes to the renormalization of smoking behavior in our society and the rebound in its long term cardiovascular and carcinogenic effects."

Indeed, research suggests that, compared with non-users, youth who use e-cigarettes are more likely to transition to conventional cigarette smoking. The National Academies of Sciences, Engineering and Medicine report on the health effects of e-cigarettes concluded, "There is substantial evidence that e-cigarette use increases risk of ever using combustible tobacco cigarettes among youth and young adults."

Another study by RAND Corporation, published in Nicotine & Tobacco Research, reached the same conclusion, but noted teens don't substitute vaping products for cigarettes. Instead, "they go on to use both products more frequently as they get older," said Michael Dunbar, the study's lead author and a behavior scientist.

As medical professionals have sounded the alarm on the potential risks associated with e-cigarette products, vape manufacturers, including JUUL, have come under mounting scrutiny for not only allowing minors to access its devices, but also for marketing them in ways that appeal predominantly to teens, with edgy, humorous social media posts, sweet-flavored products and paid partnerships with online "influencers."

In response to criticism, the popular vaping company, which prompted memes and parody accounts beloved by teens, last year shut down its Instagram and Facebook accounts and strengthened the age verification process on its website as part of an "action plan" to combat the teen vaping craze.

"By deterring social media promotion of the JUUL system by exiting our accounts, we can better prevent teens and non-smokers from ever becoming invested in the device," Kevin Burns, the company's CEO, said in a statement last November.

Though some applauded the move, others stressed it doesn't go far enough to curb the dangerous trend.

In response to mounting health concerns, some cities across the country have moved to place limits on e-cigarettes, with at least a dozen raising minimum age for buying tobacco and vaping devices from 18 to 21.

Earlier this week, Michigan became the first state in the nation to ban the sale of flavored e-cigarettes both in stores and online. Recent studies have found that vaping products that use sweet, fruity and menthol flavors are more likely to appeal to teens and contribute to nicotine addiction.

In June, San Francisco, California, home to JUUL, became the nation's first major city to ban the sale of all e-cigarettes that haven't been approved by the FDA. The ban is scheduled to go into effect Jan. 1, 2020.

Siegel, the Boston University professor, criticized Michigan's vaping ban and those like it. He said the measures will "very negative effects" on the public health.

"I don't see any public health justification for banning e-cigarettes, but allowing cigarettes to remain to be sold — especially if you're concerned that kids are going to be at risk for smoking," he said of Michigan's ban. "Any effect that this law is going to have is that a lot of adult ex-smokers are going to go back to smoking when their [e-cigarette] products are no longer available."

"And, the ultimate irony of this law is that those adult ex-smokers who don't go back to smoking are probably going to start purchasing off the black market," he added. "The governor has just created a black market that didn't before exist, and those products are not going to be regulated by the FDA."