Republican members have put on quite a show during impeachment, airing plot points from the Fox News universe 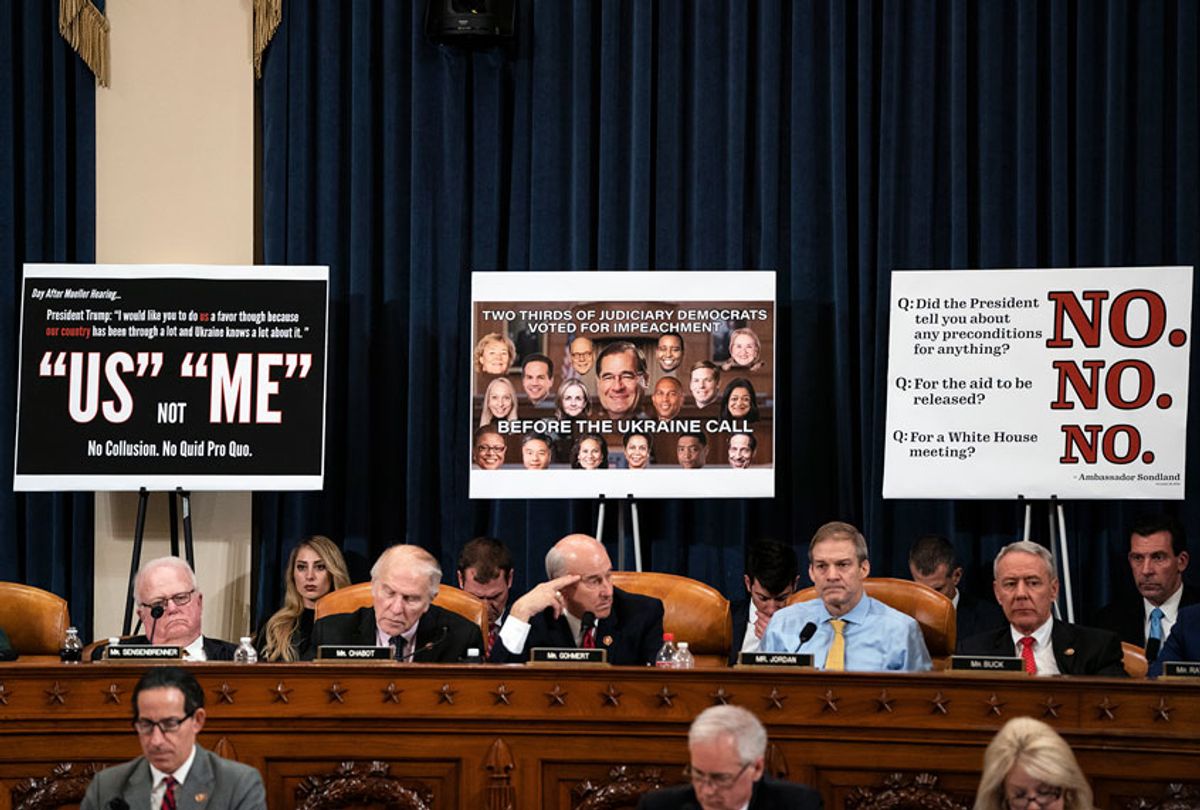 Committee members listen to debate during a House Judiciary Committee hearing December 12, 2019 in Washington, DC. The articles of impeachment charge Trump with abuse of power and obstruction of Congress. House Democrats claim that Trump posed a 'clear and present danger' to national security and the 2020 election in his dealings with Ukraine over the past year. (Alex Edelman -Pool/Getty Images)
--

Speaker Nancy Pelosi first announced that the House would formally take up an impeachment investigation on Sept. 24. Sometime on Friday, the House Judiciary Committee will almost certainly vote to send two Articles of Impeachment to the full House. If a whistleblower hadn't stepped up and set this ball in motion, we would still be seeing President Trump at his rallies screaming about the Ukrainian government's interference in the election and the corruption of Joe Biden — and the mainstream media would be chasing the story like it was a private email server. Team Trump was only days away from getting away with it.

From the moment he stepped on to that  escalator in June of 2015, Donald Trump's unethical, illegal and immoral behavior has been leading toward this day. Assuming that the full House votes to impeach and sends the case to the Senate, his name will always have the scarlet asterisk next to it as the third president in U.S. history to be impeached, a fact which reportedly upsets him greatly. In a just world, he would be the first president to be impeached, convicted and removed from office. That's not the world in which we live, unfortunately.

The hearings this week were long and tedious, but they served an important purpose nonetheless. The two sides had different goals. The Democrats laid out the case with which most of us following this event are familiar and managed to be serious and respectful while doing it. Judiciary Committee Chairman Jerry Nadler, D-N.Y., kept the proceedings from careening out of control and there was even some persuasive rhetoric and memorable oratory.

Republicans had a different goal. They presented a number of defenses, much of them consisting of emotive hand-wringing, faux exasperation and yelling. As former Breitbart editor and Republican House aide Kurt Bardella wrote for NBC, this is a long-standing strategy:

Revisit the 11-hour grilling that former Secretary of State Hillary Clinton was subjected to by Republicans during the Benghazi hearing and you’ll see the now familiar sight of Republicans yelling and badgering their witness. As Rep. Adam Smith, [D-Wash.], observed that day, the Republicans’ strategy was to try and “wear you down.”

This was obviously their goal during Thursday's marathon hearing, and it worked. It was long and tiring, mostly because Republicans kept offering amendments, many of them barely making sense, after which the whole committee had to debate them and then vote on whether to adopt them. All were voted down along party lines, votes, the final vote coming after 14 hours of debate. Clearly the Republicans had planned all along to prolong the  process so they could say that the Democrats had voted to impeach in the dead of night when nobody would see it. Nadler called their bluff announcing that the committee's final vote would be postponed until Friday morning. The Republicans melted down into full-blown hysteria, but by that time no one was listening.

Bardella writes that Republicans' "script is built on misdirection and moving the goalposts as their paltry strategy shifts to incorporate various conspiracy theories and outlandish claims," observing that they consciously treat every member's time as if he were appearing on a Fox News segment.

I think that's literally what they are doing. They are using the formal setting and the national attention to introduce people to the alternative reality that only people who watch Fox News usually see.

Take, for instance, the big signs Republican committee members have printed up and set on easels behind them. They feature things like pictures of Rep. Adam Schiff, chairman of the House Intelligence Committee, on a milk carton with the words "Where's Adam?" obviously pushing their absurd demand that Schiff be compelled to testify as a witness. (Nobody showed up in an official Trump campaign "Where's Hunter" T-shirt, thank goodness.) Another was titled "Coastal Impeachment Squad" featuring a picture of the Democratic leadership spelling out that they are from New York, California and Massachusetts, clearly implying they are not Real Americans. At one point, they displayed the message "0 DAYS SINCE ADAM SCHIFF FOLLOWED HOUSE RULES" but removed it when thousands of people pointed out on Twitter that zero days since something occurred, in fact, means that thing occurred today.

Knowing that the Senate will not convict Trump under any circumstances offers Republicans an opportunity to use these nationally televised hearings to spread their conspiracy theories, memes and smears to a much wider audience. They are taking full advantage.

GOP members deployed their patented "process" argument constantly, of course. That was led by Rep. Doug Collins of Georgia, ranking member of the Judiciary Committee, who former GOP campaign adviser Rick Wilson aptly described on MSNBC as a "screeching histrionic drama queen." Others repeatedly insisted that the Democrats should go through the courts rather than charge the president with obstruction of Congress. Nadler finally put that one to bed by pointing out that "no privileges have been asserted. There’s nothing for a court to review."

Perhaps one of the most startling speeches came from Rep. John Ratcliffe, R-Texas, who took the position that Trump did nothing wrong to a new level, asking, "Is it ever OK to invite a foreign government to become involved in an election, involving a political opponent? The answer is 'yes.' It better be — we do it all of the time." He later tried to explain that "involve" doesn't mean "interfere." It was not convincing in the least. But acting White House chief of staff Mick Mulvaney was almost certainly relieved to see someone other than him make such an incriminating comment before the whole country.

The two congressmen who really carried the ball for the president over and over again were Matt Gaetz of Florida and Louie Gohmert of Texas. Here are just a couple of examples of how each of them aggressively played to the cameras with Fox News talking points:

Those are just a few examples of the smears and lies those two shared on national TV on Thursday. They were bravura performances, which the president liked very much. He broke his previous record for tweets in a day, many of them retweets of the worst commentary from the Republicans on that committee.

Whether anyone who lives outside the Fox News universe would be impressed is hard to know. As I've written before, it doesn't really matter. The point is to give oxygen to their disinformation and propaganda by any means necessary so it may live on. Republicans have achieved that goal. And I'm pretty sure the impeachment trial won't be the last we hear of any of it.